The whimsical mayhem of the Syfy series returns with Season 2 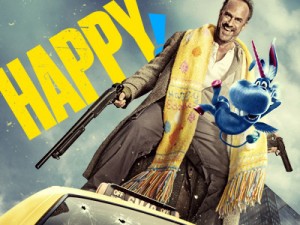 By the end of Season 1, Hailey was not only rescued from the most perverse bad guys imaginable, but she was maturing enough that she no longer needed Happy. So Happy has moved on to a new person who needs a best friend – the appalled Nick.

HAPPY!  began as a graphic novel written by Grant Morrison and illustrated by Darick Robertson. Morrison, who hails from Glasgow, Scotland, is a prolific writer on multiple comics series and creator of the BATMAN villain Professor Pyg. He developed HAPPY! for television with director Brian Taylor.

ASSIGNMENT X: Congratulations on the second season pickup for HAPPY! Were you at all surprised by the pickup?

GRANT MORRISON: Not really. I thought it was good, it’s a good show. I think HAPPY!’s got something, a certain soul that comes from that little horse. The second season, honestly, what’s amazing is that all the characters that people loved in the first one, they get so much more to do, they grow in the most bizarre directions. So I think people are going to love it. I just saw the rough cuts of the last four episodes, and they are so good, so good, heartbreaking, surreal, violent, funny. 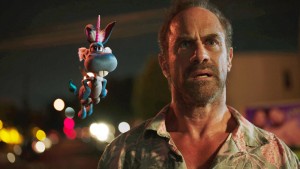 AX: How much does the television series HAPPY! resemble the original graphic novel HAPPY!?

MORRISON: The pilot is an almost perfect recreation of the first episode of the book, and then it takes off in its own direction. But, yeah, it hits all the same notes of the graphic novel, but it’s its own thing, it grew its own roots. And in the graphic novel, Nick Sax dies. And in the television series, he lives. So it was very much a decision as to, “Okay, let’s see what happens when the guy lives.”

MORRISON: Very much. We had the basic idea. We wanted to make him look like MY LITTLE PONY, but messed up. So he looks more like a donkey, but he thinks he’s a horse, and he’s this little messed-up, buck-toothed creature who has a very high opinion of his looks. [In Happy’s mind], he’s lovely, he’s a wonderful thing. So he’s very close to the vision designed in the book. But to see him move, to see him have emotions, to see him change, particularly in Season 2, we get to see him change in a way that’s very interesting and unusual.

AX: Is that because he’s Nick’s friend now?

AX: Were Christopher Meloni and Patton Oswalt your first choices to play Nick and voice Happy?

MORRISON: Meloni was definitely our first choice. Patton came in a little bit later. Meloni was the very first person we wanted for that role. He’s perfect. We couldn’t have done any better.

MORRISON: Well, it wasn’t, because obviously, the graphic novel came first, and it was just a story about an ex-cop who turns into a bad guy. And then suddenly Chris comes on and brings all this back story with him, so we were able to imagine if Elliot Stabler had gone to the dark side. And I think that added so much background that we didn’t have to back-load all that emotional content that people would bring to Chris as an actor. So it worked really well for us that he played a cop for so long. 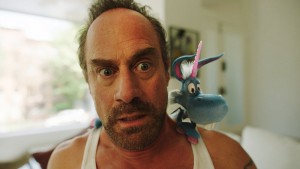 AX: Is Patrick Fischler back as the evil Smoothie?

MORRISON: He’s astonishing. He has a much bigger role. He was a character everyone loved in the first season, and he has a very big role in this. He’s one of the central villains.

AX: Only certain people can see Happy. Will Nick’s daughter Hailey ever be able to see Happy again?

MORRISON: Well, you’ll see. Watch what happens in Season 2. Other people may start to see Happy.

AX: The first season was eight episodes. How many episodes is Season 2?

AX: Between the word usage, the violence and the sex depicted in HAPPY!, one might conclude that the Broadcast Standards department had left the building. Seriously, did you have any discussions with Broadcast Standards, or did they just say, “Oh, do what you want”?

MORRISON: It looked like it. I think there are just so many shows there, that they can’t keep an eye on all of them. I think they just rolled over and accepted that this was for the good of the planet [laughs].

AX: Is any of Season 2 going to be tied to the family of mobster Francisco “Blue” Scaramucci, played by Ritchie Coster?

MORRISON: We’re playing all of that out. Those are strands of the story which we laid down so we could develop them. Certainly, it becomes much bigger in Season 2. There’s a coda at the end of Season 1, where we see the Blue character, and he’s being possessed by something. So it’s all about what happened at the end of that first season, and what is inside him right now.

AX: Did you know the plot for HAPPY! Season 2 when you did Season 1?

MORRISON: Brian and I, we worked out three seasons of the show way up front. So we knew where it was going. We know what’s happening if we get a third season, which I hope we do. We kind of know, we have a very vague over-arching plot that we worked out at the beginning.

MORRISON: Yeah, I’m doing BRAVE NEW WORLD right now for UCP [the production company that makes HAPPY!] as well. I’ve got this deal with them, and I’m working on adapting my comics series THE INVISIBLES from the ‘90s. So that’s my three big projects for this year.

AX: Is THE INVISIBLES also for Syfy/UCP?

MORRISON: It’s for UCP. Whatever variant that comes out.

AX: And what would you most like people to know about HAPPY! Season 2 right now?

MORRISON: That if you liked HAPPY! Season 1, this is HAPPY! squared. All your favorite characters have way more cool sh*t to do. It’s heartbreaking, as I said. It’s dark, it’s funny, it’s surrealistic. It will strum your heartstrings and make you laugh.

This interview was conducted at Syfy’s party for the Winter 2019 Television Critics Association press tour.