With an auction and support from the genre filmmaking community, the future looks bright for the horror store 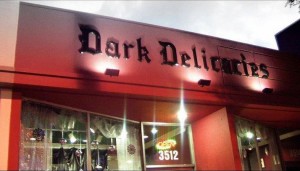 Dark Delicacies Bookstore in Burbank has been a fixture in the horror community since it first opened twenty-five years ago. Owners Del Howison, a horror writer himself, and Susan Duncan-Howison are currently running an auction, which culminates Saturday, February 2, to help fund Dark Delicacies’ move from its current location to its new home. As they’ve been preparing the move, an outpouring of support from the genre filmmaking community (including Academy Award winning director Guillermo del Toro) have helped bring attention to the bookstore everlasting legacy.

You can check out the Dark Delicacies auction HERE.

ASSIGNMENT X talked with Howison about the history and future of Dark Delicacies.

ASSIGNMENT X: When did you first have the idea of running a horror bookstore?

DEL HOWISON: When Sue and I first got together we melded our love of horror books and films and wanted  to decorate with items that reflected our taste. Couldn’t find any. That got us to thinking that maybe there were others who wanted the same things. There were.

AX: Where did you first open Dark Delicacies?

HOWISON: We first opened in Burbank on Magnolia in December of 1994.

AX: How has Dark Delicacies changed over the years?

HOWISON: In the beginning, we opened with our own collection as stock. Our timing was right, because it was about that time that the rise of horror products from toys to dishware and clothing began, and eventually we were able to adjust our products as new items became available. We adjust all the time.

AX: How many times has the store moved?

HOWISON: The new place that opens in [June] will be our fourth place and third move.

AX: What has been some of your favorite merchandise – books, collectibles, DVDs, et cetera – that you’ve carried at Dark Delicacies?

HOWISON: I’m a book lover first and films second but I suppose I most delighted by different approaches that feature the classic Universal monsters. 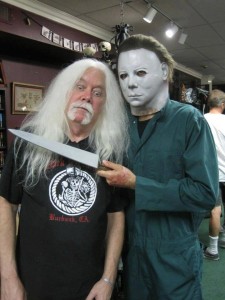 AX: Dark Delicacies has a lot of big-name book and DVD signing events. How do you decide on who you’d like to bring in for signings?

HOWISON: Usually they need to have a new product to hawk. I mean, when William Friedkin signed two different times with us, he had his autobiography once, and new Blu-ray releases of some of his films the other time. The system here has always worked the same with very few exceptions – the person signing has a new product. The fan buys that product at the store and the pro signs the product for free. If they so choose, the pro can bring other items, like photos and such, and sell those. They can also charge to sign other items that fans bring in have them sign. The store makes money, the pro makes money, and the fans get up close for a lesser amount than paying to get into a convention. It’s a win-win-win.

AX: Who are some of your favorite signing guests? What have been some of the most memorable signing experiences?

HOWISON: I was especially taken by Ernest Borgnine, who was in Dark Delicacies to sign his autobiography. I had to pick him up from his house and drive him to the signing, and then take him home afterwards. Great conversation in the car both ways. When I took him home he gave me a tour of the house and we took a couple of photos together. That was magic for me.

AX: How does the current auction to support the Dark Delicacies move work?

HOWISON: People go online to our website (www.darkdel.com), click on the Fundraiser Event tab and scroll down to the auction section. They can bid by sending us their bid in an email. On the evening of Saturday, February 2, we will auction of the items shown on that page (plus more) live in-store with the starting bids that people placed between now and then.

HOWISON: Best laid plans are, we have to be out of here May 31, which would let us open June 1. fingers crossed. We’ll see

AX: Where is the new location?

HOWISON: About a block and a half away [from the current Magnolia Boulevard location] on Hollywood Way, which is the main thoroughfare to Burbank Airport, so maybe we’ll be discovered by some new fans.

AX: Any exciting stories about finding the new location?

HOWISON: It needs a lot of work. We’ll see how exciting.

AX: What is the division of responsibilities between you and Susan Duncan-Howison?

HOWISON: We’re co-owners, but as far as division of duties goes she does ninety-five percent of the buying and setting up the signings, and I do these interviews and write my books. 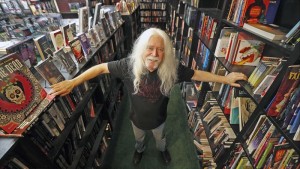 AX: Anything else you’d like people to know about Dark Delicacies right now?

HOWISON: Bear with us if we’re a little slow getting back to you on something as there is a lot happening. Pardon our dust. But go online and check out the website. Come out and bid at the auction or jump on our Gofundme page or just shop and have fun. We’re planning a couple of cool things for the new spot, but the current store will be rocking until then.

You can check out the Dark Delicacies auction HERE.