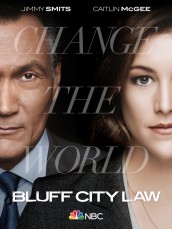 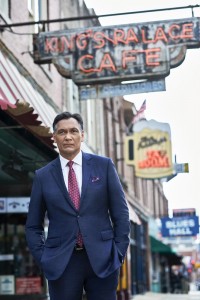 In NBC’s new Monday-night legal drama BLUFF CITY LAW, Jimmy Smits stars as crusading attorney Elijah Strait. Elijah has his heart in his work, standing up in court for the underdog. He is devastated by the death of his wife. When daughter Sydney (Caitlin McGee), a corporate attorney, comes home, Elijah woos her back to the family firm, despite their strong differences in outlooks, and even though Sydney hasn’t yet forgiven him for cheating on Mom.

Executive producer/writer Dean Georgaris (creator of the series THE BRAVE, one of the writers of the feature THE MEG) talks about making BLUFF CITY LAW, which is shot on location in Memphis, Tennessee. Partway through the conversation, Georgaris’s fellow executive producer Michael Aguilar (a producer of the upcoming PENNY DREADFUL: CITY OF ANGELS, the original PENNY DREADFUL, I’M DYING UP HERE, and KIDDING) joins in.

ASSIGNMENT X: What is the division of responsibilities between you on BLUFF CITY LAW?

DEAN GEORGARIS: I’m basically in the writers’ room, so my responsibility is getting those scripts. I’m the show runner. Michael functions a bit like a show runner on the actual set, often, because we’ve worked together for over twenty years, in movies and in TV, and then [fellow executive producer] David [Janollari] handles everything back in L.A. that isn’t writing, so the studio, and the casting, and the overall vision and the marketing.

AX: Was it difficult to convince Jimmy Smits to move to Memphis for the duration of production?

GEORGARIS: We never spoke specifically about Memphis. We spoke about character, and the process with Jimmy was, first we heard a rumor that Jimmy Smits might be interested in being Elijah, in which case, you don’t walk, you run. And then we had three or four coffees and lunches, and it was always about, “Let’s talk about this character, let’s talk about the family, let’s talk about where you want the show to go.” He kept whether or not that was a difficult decision for him, he kept that separate. His approach is, we’re always talking about the work. Honestly, he never raised it as an issue. He never said, “Hey, could you move it?” I think he understood the artistic value of being there.

AX: When you had those discussions about BLUFF CITY LAW, hat did he want out of the character?

GEORGARIS: Actors – you’re asking them to commit, potentially for years, based essentially on one script and a few conversations. And I think what was important to Jimmy was knowing that Elijah was an active, vital character, who was going to be mourning his wife, who was going to be leading his firm, who was constantly going to have an evolving relationship with this interesting, let’s say, family that he has. So it was really about making sure that our vision for Elijah was, frankly, as a dynamic man with a lot of life left, as opposed to some legal shows – they’ll cast a great actor, and then they use him as a figurehead, which was never our intention. But Jimmy is not a mind-reader. He needs to sit down and he needs to hear about that stuff.

AX: Did you ever consider making BLUFF CITY LAW in Los Angeles, either as the story setting, or shooting L.A. for Memphis?

GEORGARIS: Actually, no. We always wanted to shoot it in Memphis. To be candid, we didn’t expect that the studio would shoot in Memphis, just because it’s a more expensive proposition, and I really have to take my hat off to them, that they supported it. Because I sign the budget every week, and it would actually be a less expensive show in some of these other states. But it wouldn’t be Memphis. And part of the appeal of the show, I think, is, “Hey, I’m not in New York, I’m not in Chicago.” You can feel, in the pilot a little bit, in the series as we go forward much more, you’re on the Mississippi River. There’s no version of thinking that we’re faking it.

AX: What is the production infrastructure like in Memphis?

MICHAEL AGUILAR: We are shooting in Memphis entirely. There aren’t a lot of soundstages, so it’s actually kind of an advantage. We get to shoot on location, which gives it even more authenticity. We’ve converted a couple of buildings into some of our sets, and we’re continuing to do that. We’re growing the infrastructure, which we’re excited about. We’ve all fallen in love with Memphis, and it’s not an understatement. The history of the place is sort of in the soil, and the people there are so generous, and have really welcomed us. So we want to build a film community there. They have some infrastructure, and they certainly are trying to help us build it. We’ve brought some people in to help train, and try to hire as many locals as we can.

AX: Has shooting BLUFF CITY LAW in Memphis suggested anything to you in the writing of it?

GEORGARIS: Absolutely. One of the stories in one of the first episodes is a story about a blues musician, and authorship over a song. It was an idea Michael had that was just inspired by spending time in the musical community there, and seeing what’s it like for these great musicians, legendary men and women, who are not all living in mansions, and who are not all household names.

AGUILAR: And who have dedicated their lives to music. And when you see a seventy-plus-year-old man loading his own guitar and his own amp into the back of a van, but loving every minute of it, you go, “That’s a story that we want to tell.” 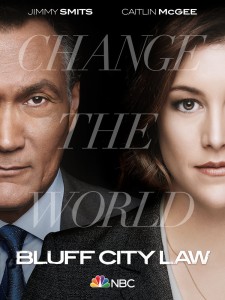 AX: There is a young office aide, Emerson, played by Stony Blyden, whose manner is very abrupt. Is the character meant to have Asperger’s Syndrome?

GEORGARIS: It was something that we talked about originally, but as the character evolved, I think, we had not assigned him any particular spot on a spectrum or anything like that. He could just be rude, quirky, different …

AGUILAR: He’s grown up all over the world. I think he grew up in a military family that was stationed all around the world, so I think he because of that became somewhat introverted and perhaps has challenged social skills.

GEORGARIS: He’s also a character working in an environment where he’s not entirely comfortable, because he’s withholding some parts of his identity, and as the series evolves, one of the really beautiful things is to watch how he, the character of Sydney and the character of Elijah form a new, unconventional family.

AX: Are we going to meet any other characters that are more centrally connected than we think they are at first …?

AGUILAR: I think this family will grow. I don’t know that we’re going to have the sort of bombshell of the end of the first episode, but I think certainly this family will always continue to grow.

AX: And what would you most like people to know about BLUFF CITY LAW?

AGUILAR: I think that it’s a show about hope.