The actor talks being reunited with director Danny Boyle 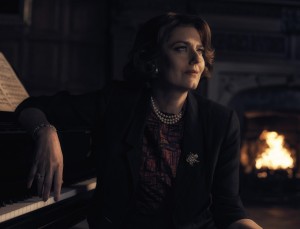 FX Networks’s Sunday-night drama series TRUST, concluding tonight, is a dramatization of real-life events in 1973. John Paul Getty III (Harris Dickinson), grandson of the extraordinarily wealthy J. Paul Getty (Donald Sutherland), tries to con some money out of the family. The plan goes south and the young man is kidnapped in Italy. His grandfather won’t pay the ransom.

In addition to his odd view of family obligations, the senior Getty keeps not one, not two, but a whole group of mistresses on hand in his mansion. Anna Chancellor plays one of these women, Penelope Kittson. The English actress had previously worked with one of TRUST’s executive producers/directors, Oscar winner Danny Boyle (SLUMDOG MILLIONAIRE), on a 1992 episode of the British detective series INSPECTOR MORSE. Chancellor costarred in the acclaimed two-season series THE HOUR and was Lucia in the 2014 revival of MAPP & LUCIA.

“I think the real person, Penelope Kittson, suffered the loss of her family,” Chancellor says during a Q&A session for TRUST, sponsored by FX Networks. “Her house was bombed in the Second World War. She lost both her parents, her grandparents, so she was somebody who had to make it alone in this world. And I think she was ambitious. She liked rich people. She was very charming. She worked. She was an interior designer. And I think, most importantly, she understood men. Some women just do. And she got Getty. She wasn’t obsessively in love with him, which made her more attractive to him. She liked him. And maybe with a person like that [Getty], not many people actually like them. People are scared of them. People want to impress them. People want things from them. But actually to be liked is a very big trump card to have in a relationship. That’s what I think.”

Following the Q&A, Chancellor engages in a one-on-one follow-up discussion.

ASSIGNMENT X: What is Penelope’s relationship like with the other women in Getty’s household?

ANNA CHANCELLOR: She feels she’s a cut above them. She’s like, “What am I doing here? I can’t believe I’m still here.” [laughs] She can’t believe she’s still there, but then she’s worried for the boy. She can’t leave. When [the older Getty] starts to behave very monstrously, and he won’t pay [the ransom], she doesn’t understand that, she can’t leave until the whole thing is sorted out, and then she does.

AX: Does Penelope have any kind of relationship with the younger Getty’s mother Gail, who is played by Hilary Swank?

CHANCELLOR: Not really. Gail is very separate. Penelope doesn’t do anything with the negotiation. In our TV series, she meets Gail once. It’s a very separate world.

AX: Were you excited about being directed by Danny Boyle again?

AX: Did you think back in the INSPECTOR MORSE days, “Oh, I bet that Danny Boyle is going to have a huge career”?

CHANCELLOR: No. And would I ever have thought, “I’m going to play Donald Sutherland’s lover”? No. It’s all a dream, working with Donald and Danny and Simon [Beaufoy, who created the TRUST series]. I mean, what can I say? For me, it was lucky, because I totally understood that part.

AX: Did you have any feelings about the fashions of the ‘70s that you were wearing?

CHANCELLOR: Under the Getty way, he liked his women to be very ‘50s. He didn’t want them to be sort of the loose Annie Hall ‘70s look, so we, his harem, were all quite old-fashioned. We all looked at what they were actually wearing, which was slightly uptight, sort of socialite, social hostess-y suits and things. But that ‘50s hairstyle, which is not hugely flattering, it’s a very formal style.

AX: What do you think Penelope would have looked like if left to her own devices?

CHANCELLOR: I think Penelope was her own woman. She was elegant, she was probably rather right-wing. A woman needed to look probably well-presented, and definitely a woman. She was of that time. It’s very difficult to take people out of context, isn’t it?

CHANCELLOR: There’s much more money around, so that made everything so much fun [laughs]. You were just treated really, really well. In England, it’s a bit of a cottage industry, where obviously we’re having to make do. It’s on a different level. Of course, in America, filmmaking, TV-making is a huge industry.

AX: Speaking of the British TV industry, do you have any memories of working on THE HOUR, which was about the early days of British TV news?

CHANCELLOR: Oh, yes. I loved working on THE HOUR. I was very attached to that part I played on THE HOUR. And I loved all the actors – Dominic West and Peter Capaldi. They didn’t commission another series, which was a great shame. Here [in the U.S.], they honored [THE HOUR creator] Abi Morgan with an Emmy. In England, I’m afraid we let it go through our fingers. She was all primed to write a third series. It was very sad. I don’t know why they let that go. The BBC makes strange decisions sometimes.

CHANCELLOR: Yes, a big Agatha Christie [miniseries] called ORDEAL OF INNOCENCE. Agatha Christie’s had a revival, really, in England, under this brilliant writer called Sarah Phelps, who’s very brilliant and dark and operatic. She and Agatha Christie make this rather potent mixture.

AX: And what would you most like people to know about TRUST?

CHANCELLOR: I just think it’s a compelling story, and Donald Sutherland is giving one of his great performances.