The actor talks about the new airline series 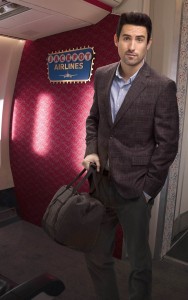 Fox Networks’ comedy LA TO VEGAS, now in its first season on Tuesday nights, follows the crew and regular passengers of a short commuter flight between Los Angeles and the gambling capital of America.

Ed Weeks plays Colin, a professor who teaches in California but flies back and forth to Nevada in an effort to patch things up with his estranged family. Weeks was previously a regular on THE MINDY PROJECT for six seasons. The Englishman is also a writer, whose scripting credits include MAN STROKE WOMAN and RANDALL AND HILDA ARE NOT A COUPLE.

ASSIGNMENT X: Were you looking to do another comedy following THE MINDY PROJECT?

ED WEEKS: It’s my dream just to do comedy forever. I love it. I started off doing stand-up and sketch comedy in my twenties, writing for lots of BBC Radio comedy, I first came to America as a sitcom writer, I still sell scripts. So when I was a thirteen-year-old, I had posters of Steve Coogan on my wall. So I’ve always been a huge comedy geek. So to land on another beautifully written sitcom, it’s my dream. It’s what I want to watch when I come home – I want to watch a fun half-hour.

AX: Do you work in the LA TO VEGAS writers’ room at all?

WEEKS: No, I don’t, but I have to say, [creator] Lon [Zimmet] and Jon [Fener] and Josh [Bycel], who are our other show runners, and [executive producer/director] Steve [Levitan] are so open with us pitching ideas, we get some improv in certain takes, they’re very trusting that we’re beginning to find these characters, and so yeah. It feels creative – you’re not told to just shut up and say the lines. There’s some flexibility, and we get to contribute creatively, which is a joy, obviously.

AX: Did you write at all on THE MINDY PROJECT?

WEEKS: Again, no. But again, MINDY had a similar sensibility. I’ve been very lucky that I’ve always landed with people who get that it’s valuable to let the actors play, and to even let the actors write jokes if necessary. MINDY was great that way. And also, [THE MINDY PROJECT costar/producer/writer] Ike Barinholtz is such an amazing improviser, Mindy [Kaling] is an amazing improviser, so that trickled down. We all got to go for it and have fun.

AX: Were you sorry THE MINDY PROJECT was ending, or were you sort of going, “I’d kind of like to play somebody else now”?

WEEKS: I mean, six years is a long time. I think it was enough. Of course, I would have happily gone on forever, because it’s such a lovely bunch of people and [Kaling] is such a genius conceptually. I feel like she was always going to find more and more inventive ways to take that show. But there’s no such thing as job security in this business, really, for any of us, and so I’m just so lucky this next opportunity came up, like I said, with a weekend’s break between the two. I’m very, very fortunate.

AX: Your LA TO VEGAS character Colin is a regular passenger on the LAX to Las Vegas route. Why does he travel back and forth so much?

WEEKS: He’s a professor, and initially, he seems a little out of place in this motley collection of flyers, because it’s a stripper and a gambler and he’s a very sort of proper, academic guy. But then we discover that he has a secret family in Vegas. He has an estranged wife and kid, and it’s them who he is visiting every weekend. But of course, that’s slightly at odds with the burgeoning romance that he begins with [flight attendant Ronnie, played by Kim Matula]. So that’s Colin’s story, at least in the short term. He teaches in L.A., visits his wife and kid in Vegas, his wife who doesn’t really love him at all, his kid who doesn’t really know who he is. He accidentally impregnated a magician’s assistant, but suddenly, he has eyes for [Ronnie], and so that’s a bit of a fun wrinkle.

AX: Would you say Colin or Jeremy is a more silly character?

WEEKS: Jeremy I think is sillier, but also he became sillier, I think, because as comedy shows go on, season by season, the characters become broader, you paint them in slightly broader colors. I think it’s a natural process that comes of seeing these characters in so many episodes, so many stories. You begin to spread your wings in terms of broadness a bit. I think Colin, to me, he feels more like me, a little more grounded, a little more introspective. Jeremy was a big peacock. Colin is shy and wry and dry and cynical and nervous. Those are things that I relate to much more.

AX: How are you enjoying spending so much time on a set that’s the interior of an airplane?

WEEKS: It’s not quite as airy and as comfortable as I was joking [that] Steve Levitan finds it, because I think they make it cooler and nicer when he’s there. You’re on a plane. It’s essentially just a plane, so it’s crowded and it’s claustrophobic and it’s a little smelly, and you get to tell whether people have brushed their teeth or not.

AX: Did you have any thoughts of, “Gee, I’m going to be spending a lot of time sitting in this role”?

WEEKS: Yes, a hundred percent, of course. It’s not unlike THE OFFICE, in terms of, everyone’s there the whole flight, right? And so even if you’re not really in a scene or you don’t have any lines, you’re there in the background. Mindy Kaling would tell me about that on THE OFFICE – even if she didn’t have lines, she was there behind the computer. You would catch her on camera. So it is a bit like taking the longest flight of your life. And now when I actually fly, I’m a bit like, “I’m over this now.” It’s way more fun to do it with these guys.

AX: Are you working on any writing projects while you’re acting on LA TO VEGAS?

WEEKS: Yes. I’m actually developing a thing for Fox, weirdly, so I’m slightly moonlighting – acting on the show by day, dealing with network notes by night. But it’s always been thus for me. I’ve always seen myself as a writer, actually foremost, and then an actor – a writer who’s lucky enough to be cast in these great things.

AX: And what would you most like people to know about LA TO VEGAS?

WEEKS: It’s just a twenty-two-minute slice of escapist fun, which I think is something literally above the fray. It’s innocent, joyful, bipartisan fun. And why the hell not, right? In this day and age? That sounds pat, but I really believe in it. I don’t want to come home and watch dark stuff, I want to see some fun.