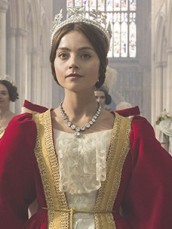 The creator and exec producer talk their new royal series 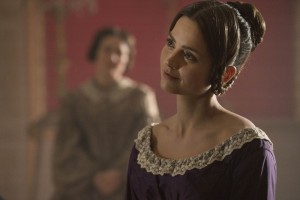 VICTORIA is airing its eight-episode first season Sunday nights on PBS’ MASTERPIECE, with a second season waiting in the wings. Jenna Coleman (of DOCTOR WHO) plays the nineteenth-century English monarch from before her ascension to the crown at age eighteen through the first years of her reign.

Daisy Goodwin created the series, based on her meticulously researched book. (The writer also has a cameo as the Duchess of Inverness). VICTORIA executive producer Damien Timmer has a long relationship with PBS as one of the forces behind POLDARK, which will be back for a third season, and ENDEAVOUR. Goodwin and Timmer are together at a high tea sponsored by PBS for the Television Critics Association press tour, where they answer some questions about their current royal enterprise.

DAMIEN TIMMER: I think with VICTORIA we have in Daisy a writer who is so [versed in] the details of that period. Because it’s a period that’s so well-documented, because we had historical advisors, historical food advisors, it’s the same process as it would be for POLDARK, which also has a historical advisor, as well as these very, very well-researched novels that the series is based on. So it’s actually very similar – you just have to make sure that every aspect of any period show you do has been researched rigorously.

DAISY GOODWIN: Yes. I suppose what’s interesting about VICTORIA is that fact is always stranger than fiction. Everything that happens in VICTORIA is true, and some of the storylines are so bizarre that you think you really couldn’t have made that up. You don’t need a writers’ room, because frankly, some of the storylines, I’m having to go, “Well, we can’t do that, because people won’t believe it. It’s too weird.”

AX: In contemporary slang, “Victorian” is now a term for “very prudish,” but apparently Queen Victoria actually had a pretty enthusiastic attitude toward sex …

GOODWIN: I don’t know how that happened. It didn’t come from Victoria. She was not prudish. She was highly sexed, enjoyed it very much, and when, after her ninth child, her doctor said, “You know what, Ma’am, maybe you should lay off,” she went, “What?! No more fun in bed, Doctor?” So I think the idea of the Victorians being repressed is something that I think the next generation kind of cast them as to make themselves seem more liberated.

AX: What kind of birth control could people use in that era?

GOODWIN: There really wasn’t anything, because basically, they had reusable condoms made out of lambskin. That was to protect yourself against venereal disease. And they got very confused, because for some reason, they thought that a woman’s most fertile time was actually the time when they were least fertile, and the other way around. So they were totally clueless about how to avoid conception. It seems incredible to us now, but unless you were a prostitute, you probably had no idea.

AX: Were there any parts of Victoria’s life that you thought, “Well, this is really kind of boring, how do I make it more exciting, or how do I get past it?”

GOODWIN: Not really, no, because I just find her fascinating. Because she’s not a boring person – she’s totally vivid. She’s like the British weather. You never quite know what’s going to happen next. Is it going to rain, is it going to be sunny, is there going to be a small hurricane? You don’t know. And that’s what she’s like. She’s never boring.

TIMMER: She has these great, dynamic relationships with all the different prime ministers, her extended family, the European extended family. It’s always in a state of flux.

AX: How is the Brexit affecting, or how do you think it will affect, the British film and television industry?

TIMMER: I genuinely don’t know [laughs]. Because it’s going to take years to unpack it, and for any kind of plan to form. [to Goodwin] Don’t you think?

GOODWIN: Yes. I think it’s one of those things. We’re all full of doom and gloom, immediately. I think there will be a lot of independent filmmakers who were applying for grants from E.U. panels who will be quite worried. But to be honest, I think there’s going to be a bit of a fudge over Brexit anyway –

GOODWIN: It’s a special British term for pretending it’s happening, but really papering everything, so everything stays pretty much the same. So it may not change as much as we think. But for us, what’s really quite funny is that I [wrote] the series before Brexit. And yet, if you watch it now, it feels so au courant in the sense that there are people being rude about the Germans, there’s all this xenophobia, there’s all this stuff about Britain being a country on its own. So it felt kind of weird. I had no idea.

AX: And what would you most like people to know about VICTORIA the series?

GOODWIN: I think it’s really important for people to remember this is true. This isn’t just something that’s been made up – this is actually based on historical fact. And I think they’d be surprised.

TIMMER: I think it’s just that thing that you’re watching so much of what is modern England is coming together in front of our eyes. This eighteen-year-old girl comes to the throne and the world grows around her. I think that’s a very pleasing, again, a very dynamic thing to watch.