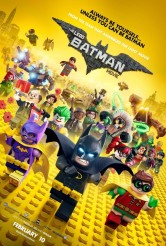 In 2014’s THE LEGO MOVIE, one of the standout characters – and running jokes – was Will Arnett’s Batman. Still voiced by Arnett, Lego Batman is now back with his own THE LEGO BATMAN MOVIE. For those who loved the look of the original LEGO MOVIE, good news – it’s back. For those who were very, very frustrated with that film’s mixed messages, fourth-wall-breaking insertion of hit-you-over-the-head comments on family and other issues, more good news – that’s all gone. For everyone, the best news – THE BATMAN LEGO MOVIE snaps together delightful and is generally hilarious.

In THE BATMAN LEGO MOVIE, our hero thinks he is perfectly content living almost by himself, with butler Alfred (voiced by Ralph Fiennes) in Wayne Manor, driving out every night to fight the various villains of Gotham City. Batman runs into several complications. First, new Gotham City police commissioner Barbara Gordon (voiced by Rosario Dawson) believes that Batman should work in tandem with the police department and (gasp!) within the law, rather than as a solo vigilante. Then there’s orphan Dick Grayson (voiced by Michael Cera), who Bruce Wayne adopts through failing to pay attention to what’s going on. Finally, there’s the Joker (Zack Galifianakis), who is so heartbroken that Batman won’t ‘fess up to their special relationship as mortal enemies that he does something very, very big, allowing this Warner Bros. production to introduce all sorts of villains from its other franchises (plus some robots that go unnamed but are instantly recognizable from a non-Warners production).

Taking a (PG) page from Marvel’s DEADPOOL, THE BATMAN LEGO MOVIE starts with making fun of its opening credits and reliably makes us laugh with a frequency that is almost nonstop. Plenty of movies try this, but here, just about all of the jokes land. For those unfamiliar with genre specifics, a few immediate ones may slip by, but even if some of the baddies aren’t recognizable, they’re given funny stuff to do.

The movie doesn’t try to deny Batman’s live-action legacy, but rather embraces it. There are callbacks to what seems to be every incarnation of the Caped Crusader, with the evident exception of the current GOTHAM (and it may be in there somewhere).

There are messages, but here they’re straightforward and easy to get behind: teamwork is good and it’s helpful to listen to people who are in your life when they tell you what they need from you. These are repeated throughout, in various forms, but again, all of it is quite funny.

Arnett is pitch-perfect in his gravelly voicing of Batman/Bruce Wayne. Dawson (who between this and DAREDEVIL is covering a lot of ground as a voice of reason in the superhero world) is spunky and enjoyable. Cera makes Robin innocent and enthusiastic without crossing the line into being annoying. Galifianakis is a worthy Joker in this context (he’s not terribly menacing, but he’s not supposed to be). Fiennes is on point as Alfred, though it’s a little odd that a character he made famous in another franchise is present but voiced by another actor.

THE LEGO BATMAN MOVIE is pretty much good for anyone who likes comedies about superheroes, movies, TV, franchises, Legos and pop culture in general. For those who require their Batman to be Frank Miller/Christopher Nolan dark and no other way, there is the word “LEGO” in the title as fair warning.