The actor talks playing a fake psychic who gets real visions 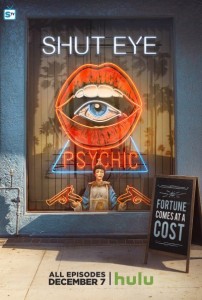 In Hulu’s original series SHUT EYE, now streaming its entire first season and renewed for a second, Jeffrey Donovan stars as Charlie Haverford. In the show created by Leslie Bohem, Charlie and his ambitious wife Linda (KaDee Strickland) are con artists and fake psychics working in the Los Angeles San Fernando Valley. Charlie is quite shocked when he begins to have authentic visions of things to come.

Donovan talks with us about his SHUT EYE turn as a man who is reluctantly seeing the light.

ASSIGNMENT X: Do you enjoy the con artist aspect of Charlie?

JEFFREY DONOVAN: I don’t necessarily have to enjoy the con artist aspect, but I do enjoy playing a guy who’s trying to always spin something, and he has to think nine moves ahead, and that’s an interesting character to play. I say something, you react, and then I have to think of nine different ways to keep that thought track going. It’s a lot of energy, but it’s very fascinating.

AX: In a way, Charlie is giving a performance i …

AX: So do you enjoy playing someone who is an actor, in his own way?

DONOVAN: Yeah. What he’s doing is, he’s playing with perception. He wants you to perceive a certain person the entire time. And you’re different from that guy and that woman and that child. Everyone’s different, and they have their own weaknesses, and he has to prey upon them. It’s a fascinating thing to try to create a different persona and perception for everyone he meets.

AX: Charlie is also a father. Are you enjoying playing a parent?

DONOVAN: Yeah. I don’t think I’ve done it in probably twenty-five years, so … [The actors playing the younger characters] are more talented than we are [laughs]. Dylan [Schmid], who plays my son Nick, is so super-talented and so great. And you realize, “Look how good he is, and all he’s doing is just being honest.” It kind of reminds you, that’s just all you’ve got to be, is honest in the moment.

AX: Do you have input into Charlie’s character?

DONOVAN: Oh, yeah. There’s a conversation I have all the time with Les and [executive producer] David [Hudgins] about, “Maybe he should say this,” or “Maybe he would have this reaction to the scene.” It’s constant input.

AX: You have sort of addressed this in a different interview, but how is it playing against Charlie’s impulse to punch somebody? In BURN NOTICE, for instance, Michael usually got to punch people …

DONOVAN: Well, I don’t feel necessarily the impulse to punch somebody, but I do feel impulses of, “Let me figure this out and be the smartest guy in the room.” And I kind of glad that I played Dodd [in FARGO], which was the dumbest guy in the room, before I played Charlie, because I think it kind of helped me segue into a guy that’s not the alpha male in the room. It’s a really fascinating challenge. KaDee is so great as Linda that she really wears the pants in the family, and it’s really a lot of fun to play that kind of role, where I’m not in control of it.

AX: Charlie and Linda both work for some Romani gangsters. Is Fonso, played by Angus Sampson, in charge, or is it his mother Rita, played by that Isabella Rosselini, really the one in control?

DONOVAN: It’s either Fonso or Rita – there’s a power struggle that’s going on, and that should be evident. It’s not very clear-cut, and that’s the good thing – who’s going to end up, and there’s going to be a huge change of power at the end of the season, but you have to realize who is in power at the beginning. So I’m not really giving anything away, so that’s kind of fun to watch.

DONOVAN: Yeah. I’ve never had to have hallucinatory connections with another dimension before [laughs], and so it’s a brand-new frontier that I’m exploring, not just as a character, but also as an actor.