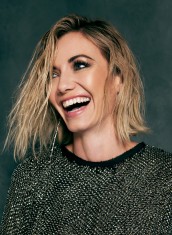 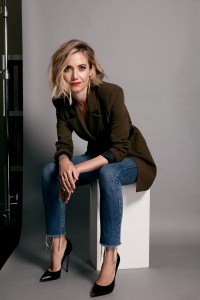 The television series adaptation of Elmore Leonard’s GET SHORTY is in its first season (and renewed for a second) Sunday nights on Epix. Chris O’Dowd plays small-time gangster Miles Daly, anxious to win back his wife and young daughter (aka “Shorty”). When a quality movie script, THE ADMIRAL’S MISTRESS, falls into his hands, Miles thinks this may be his ticket to stability. Down-on-his luck producer Rick (Ray Romano) doesn’t realize what he’s taking on when he gets into business with Miles.

Megan Stevenson’s character, studio executive April Quinn, doesn’t know about Miles’ shady life either, though she gets an inkling when he blackmails her into helping him out. Stevenson spent three years playing A.J. Gibbs on Comedy Central’s REVIEW. A native of San Diego, California, Stevenson speaks by phone from the patio of her mother’s house in Park City, Utah, where she’s hanging out with a pack of four dogs (her own pit bull and puggle and her mom’s terrier and Chihuahua).

ASSIGNMENT X: How did you get involved in GET SHORTY? Were you familiar with the original Elmore Leonard novel and/or the 1995 movie with John Travolta and Rene Russo?

MEGAN STEVENSON: Yes. More so the movie. Rachel Tenner was casting [the series], and she cast me in [REVIEW] that I did for the years leading up to this. It wasn’t titled GET SHORTY when I went in for the audition, it was Untitled Davey Holmes Project. But of course they told me before I went in for it that it was basically GET SHORTY. I knew just because it was an hour long, it would be a different style from the movie, so I went in with a blank slate. I didn’t do a lot of research into GET SHORTY, because [it wouldn’t work for the series to] try to base stuff off of the movie. So it was really much more Elmore Leonard and Davey Holmes and being excited about that.

AX: What if anything did they tell you about April when you went in to audition?

STEVENSON: I did not know much. I think the breakdown had said, “Rick’s former assistant,” so I knew I was Ray Romano’s former assistant, and I knew he was playing the Gene Hackman role, the down-and-out producer. I knew she was big at the studio, she’s a high-powered studio exec. Then the audition scene was the blackmail scene you see in Episode Three. So I really had to pull from the audition scene as much back story information as I could. It wasn’t until we shot that pilot – because in the pilot, I say, “Seven years ago, I worked for Rick,” so [before that], I knew nothing of how long it had been since I worked for him, and how far up I was at the studio.

AX: Is April based on anybody you’ve observed during your acting career?

STEVENSON: Yeah. I feel like I knew who this person was right away based on experiences that I’ve had working in the industry, but it was really kind of a mish-mash of my own ideas and the fact that she’s young and she’s so high up in the indie studio already, and knowing she didn’t come from Los Angeles, she’s a transplant. Also, she’s just a young girl, too, trying to make her way up.

AX: In most of the scenes, April has more power than Rick. Is it hard or fun to play scenes where April is exuding power over Ray Romano’s character?

STEVENSON: Oh, man. That’s a total Catch-22 combo. Because on one hand, [Rick] was [April’s] first boss, and I think he had a lot to do with [her] even getting in at the studio, pushing [her] to go there and he probably wrote a really nice referral letter. When April started working with him, she was super-young and brand-new to Hollywood. And so I think she really looked at him as like a father, that kind of a role model. But then again, she was treated as an assistant and had to do a lot of annoying assistant work with him. So on one hand, it’s kind of exhilarating to go in and know that you really made your way up, and kind of rubbing that in a former boss’ face, but then the other side of that is, you love him and want him to do really well. So it’s a complete contradiction and really a hard way of navigating that. It’s three-dimensional. 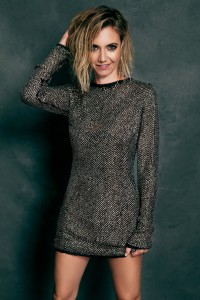 AX: And how would you describe April’s relationship with Miles?

STEVENSON: I think right away she has a very strong connection to him. She meets so many people on a daily basis in her job, I don’t think many people stand out to her. And he definitely stood out to her. And then of course, what happens in their relationship, she’s forced to work with him and be in this intimate relationship with him. You see that even though she kind of wants to hate him and wants to blame him for everything that’s going on, that this really is awful, what she’s having to do, I think that as it unravels, she has a change of heart about the movies she works on and reexamines what she’s doing at the studio, and what she really wants to do, what are the films that she wants to make.

AX: What do you think April ultimately wants to do and to be?

STEVENSON: I think what’s happening is, in the first season, it’s changing. I think at first she was like, “All right, producer to head of studio,” have that whole picture of, “Well, this is success. This is where the success is.” But then through working on this prestige picture, feeling emotions when she reads the script and actually enjoying it, that’s changing her, and it’s opening her up to asking, “What are we actually doing when we’re making movies? What’s the point of it, what are we trying to get out of audiences? Is it really all just about money, or can there be another side to it?” I think at the end of the first season, the change is happening, because she’s reassessing that. I don’t think she [consciously] knows at the end of the first season. I think that will be revealed more, and you’ll have to see where she goes with it. But she definitely knows that something has changed in her, and maybe head of the studio world is not looking as glamorous as it once did. [She wants] to be a part of something that she’s proud of.

AX: How much does April get involved in the criminal side of things?

STEVENSON: Well, she doesn’t get involved in the criminal side, the Miles side. She knows that he blackmailed her and that he does dirty stuff like that, but she’s still completely in the dark about the world that he really is in. Towards the end of the season, she gets a glimpse into it, and it’s starting to turn in her. “Wait. Who is this person, what’s really going on here?” The only thing I can say without giving anything away is, she does something that puts herself back on top when she’s been knocked down, and it’s kind of the style of how Miles operates. She learns from Miles and his technique and uses it to her advantage when she wants something that her boss has taken away from her.

AX: You spent three seasons doing REVIEW on Comedy Central. Is there much difference in the way that and GET SHORTY are made?

STEVENSON: Oh, yeah, obviously, they’re extremely different. REVIEW was a single-camera comedy, but it was broad, and especially my role in it, the cohost of a show within a show, was extremely improv-based and funny and wacky. This one has a comedy undertone throughout each episode, but it’s very dramatic, and the tone of it is very real and not broad at all. It’s completely the opposite of REVIEW, and it’s much starker and grittier, so even how it’s shot, the writing is completely different, it’s slower. So it’s totally the opposite.

AX: You’ve done some one-hour drama and some half-hour comedy and some feature films. Had you do anything that was good preparation for doing GET SHORTY?

STEVENSON: It helped, obviously, that I had done one-hours, but it’s different than the one-hours I’ve done. And obviously, the comedy is different than any kind of multi-cam or half-hour that I’ve ever done. So it was just its own unique thing, really, which was fun, because I didn’t bring anything else into it.

AX: How is the schedule, as far as, you’re working longer days and more days on location than you do on a half-hour?

STEVENSON: Certain scenes, yeah, were a big, big set-up and a really long day, but most of it was in a soundstage, and everyone from the show got along so well that that really made the day go by so much quicker.

AX: How is working with Ray Romano and Chris O’Dowd?

STEVENSON: Great. They’re both so amazing, and they’re really nice, and they have the most hysterical stories on set. That was really what made the experience so awesome. My first day on set was with Ray, for the pilot, and he was so nervous. And that made me feel great, because I was of course nervous, and I didn’t think he would be nervous after having done so many shows, but he’s such a normal, humble dude, that made the experience so much better.

STEVENSON: I did a little part in Martin Starr’s new movie, SILVER LAKE. That’ll be coming out, probably next year. And I’m working on what I’m going to do before we start shooting [GET SHORTY] Season 2 February of next year.

AX: And what would you most like people to know about GET SHORTY?

STEVENSON: If they’re an Elmore Leonard fan, I think they will thoroughly enjoy it. I think the show captures Elmore Leonard’s writing perfectly, and it’s a show that will leave you guessing after each episode. There are so many surprises and scripted turns that it will keep you on the edge of your seat. And it’s also funny and it’s got amazing characters. So I think it’s a world that people will just fall in love with and it will be a good time.