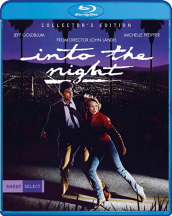 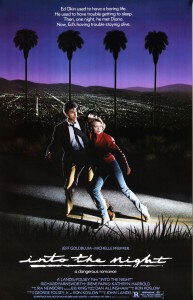 While you may know John Landis from his successful comedies (ANIMAL HOUSE, THE BLUES BROTHERS, TRADING PLACES) or his horror efforts (AN AMERICAN WEREWOLF IN LONDON, Michael Jackson’s THRILLER video), many of his projects  that fall in between are worth a second look.

While I was never a fan of his 1992 vampire film INNOCENT BLOOD, its recent release on Blu-ray (and taken for what it is, which is a vampire crime thriller) has aged rather nicely. The same is true for 1985’s INTO THE NIGHT. I’ve always had a soft spot for this comedy thriller and rewatching it in its remastered Blu-ray incarnation reminded me of the reasons why this is a criminally underrated effort in Landis’ career.

Think of it as a West Coast/Los Angeles version of Martin Scorsese’s East Coast/New York AFTER HOURS (also released in the same year). INTO THE NIGHT follows the sad sack life of Ed Okin (Goldblum) whose life is turned on its head after saving troubled Diana (Michelle Pfeiffer) from bad guys in an airport parking lot. The film is episodic in nature, mixing low-key humor, fast-paced action and a plethora of cameos, but it’s never boring and it’s also unpredictable at every turn.

It all begins with Ed’s insomnia. He can’t sleep and while coming home from work early one day, he discovers his wife cheating on him. After his best friend Herb (Dan Aykroyd) convinces him to get on a plane to Vegas since he has trouble sleeping, he decides to do just that. As he’s parking his vehicle at LAX, the very attractive Diana literally falls into his life. Pursued by gun toting thugs (one of them being a silent Landis), she gets in Ed’s car and escapes. While she tries to find a way to survive the night, Ed continues to tag along and gets deeper and deeper into her world which involves rich millionaires, diamond smuggling and an angry Elvis impersonator brother (Bruce McGill).

B.B. King’s guitar work serves as the musical spine of the picture paired with Ira Newborn’s bouncy score and it’s one of many enjoyable touches that makes INTO THE NIGHT stand out. The film is almost dream-like at times, as Ed struggles to do the right thing while his growing affection for Diana continues to get him into more trouble.

Goldblum is fantastic, low-key and sardonic as usual with Pfeiffer giving one of her most infectious and serio-comedic performance. What could have been a glamor role is transformed by her gravitas and spunk, something the actress has rarely had the chance to showcase in subsequent roles as she took a mostly dramatic route with her career following this.

Landis loves populating his movies with cameos and this movie is no different including some by famous directors (here you have David Cronenberg, Don Siegel and Paul Bartel among others) as well as a couple of great musician cameos. Carl Perkins has a flashy brief role while David Bowie is bad guy looking for Diana’s diamonds and keeps mistaking Ed for a fellow assassin. One of the stand outs is a fight between Bowie and Perkins against the backdrop of the classic Univeral monster movie ABBOTT AND COSTELLO MEET FRANKENSTEIN playing on the TV.

The special features on this Shout Select release are fantastic. There’s are great new interviews with John Landis and Jeff Goldblum shedding more light on the making of the film.

Also included an archival documentary on B.B. King as well as a completely forgotten music video for the B.B. King song “My Lucille” from the film which featured Goldblum, Pfeiffer, Dan Aykroyd and Eddie Murphy playing the back-up band to King. Utterly awesome.

Hopefully with INTO THE NIGHT, people will get a section chance to discover this weird and funny hybrid comedy.