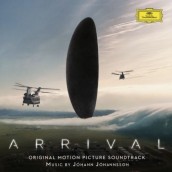 An Icelander whose intensely psychological, yet still melodically accessible modernist scores like PRISONERS and SICARIO speak in alien languages of subsonic strings and nerve-chilling brass at last gets his actual close encounter as he translates the Rorschach Test language of obelisk / monolith dwelling inter-dimensional deities here. Johannsson brilliantly captures both a sense of wonder and fear with beholding the mind-boggling, verbally-scrambled unknown as whale cry motifs join with alternately moaning and chattering voices, backed by a strong orchestral sound that serves as a powerful universal musical translator in a way that’s both harmonically understandable, and profoundly strange in a soundtrack that now elevates Johannsson to level of film scoring’s Gyorgy Ligeti with the score equivalent of 2001’s climactic head rush into the experimental unknown.

Michael Giacchino is the Composer Supreme when it comes to being the hardest working musician in the genre multiplex realm this year, keeping up a consistent sense of symphonic wonder with the likes of ZOOTOPIA, STAR TREK: BEYOND and a little prequel called STAR WARS: ROGUE ONE. But it’s Giacchino’s first franchise venture into The Marvel Universe that casts a particularly beguiling spell with DOCTOR STRANGE not only for summoning up all the thematically heroic orchestral forces at his command, but also drawing up the musical mystical arts of way-out reverse sampling, the harpsichord and the sitar, creating a crazy-quilt melodic universe that’s the equivalent of a mind-bending Steve Ditko splash page from the original comics, a devotion to the source material that makes Scott Derrickson’s movie such a particularly joyous adaptation. Giacchino’s admiration for this kind of colorfully iconic stuff always brings out a real sense of fun and excitement well suited to each blockbuster, here conveying a particular excitement of a very talented fanboy romping about a fantastical playing ground he’s always longed to be a part of – in this case a constantly morphing, topsy-turvy cosmos he zooms about with groovily psychedelic panache. 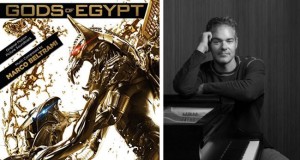 Having played KNOWING‘s apocalypse and I ROBOT‘s mechanical revolt for all of its wonderful orchestral bombast in the service of Egypt-born filmmaker Alex Proyas, Marco Beltrami really gets to go to cosmically symphonic town for this wonderful exercise in throwing any semblance of restraint to the winds as he pays tribute to these GODS as well as his mentor Jerry Goldsmith with enough sweepingly memorable, Middle Eastern-style themes to fill Set’s treasure vault, It’s the stuff that bold Saturday matinee thrills are made of in service of giant beings with a habit of transforming into metallic beasts, or a flat Earth being guarded against an equally gigantic demon – waved off with music that’s a terrifically fun exclamation point to wonders within Proyas’ unsung vision of “Planet Egypt.”

The uniquely suited team of Wallfisch, Williams and Zimmer more than have the right stuff to musically chronicle the below-the-line black women whose math-magician skills truly got the space race off the ground. It’s a combination of soul, futuristic percussion and symphonic pride that seamlessly rockets with an inspirational vibe, never failing to hear melodic optimism in the face of almost unbelievable prejudice, finally uniting in a common, movingly melodic goal that’s greatly empowered by Williams’ sense of energetic vocalese – though his vocal beat box stylings stop understandably short of a chorus of “Happy,” given the less-than gleeful era its heroines’ music nobly gains its determined respect from.

An animated scoring ethnomusicologist second to none for Disney with his ventures to Africa in TARZAN and Alaska for BROTHER BEAR, Mark Mancina sails, and soars higher than ever as he hits Polynesia’s south seas for MOANA. Already a rhythmatist of note with SPEED, Mancina combines drum percussion with the sounds of instruments as old as the island gods, then puts them in league with the west’s Hollywood tradition of a rollicking symphony orchestra for a respectfully thrilling adventure score that hears a universal language of heartfelt Disney Princess emotion, along with The Rock’s brawny antics for a thoroughly fun, culturally heroic splash.

As the composer who not only helped launch indie films and their often-corresponding electric sound with SEX LIES AND VIDEOTAPE, Cliff Martinez has used his distinctive, crystalline voice to push the surreal boundaries of synths, making it only natural that the similarly transgressive vision of filmmaker Nicolas Winding Refn would choose Martinez to play the darkly rhythmic voice of DRIVE and ONLY GOD FORGIVES. But it’s the gamine innocence of NEON DEMON‘s model that brings out Martinez’s electric LSD like never before. Sparkling with slick, sick musical colors, Martinez conjures the artificiality of a realm where looks are everything, an all-consuming wall of knowingly hip sound that’s utterly hypnotic in its little girl lost fairly tale feel, gnarled samples and unnerving atmospheres that perfectly complement Refn’s truly sick sense of humor while creating a memorable, plastic musical realm all its own.

If Bernard Herrmann’s music was about resurrecting the ghosts of Straus and Wagner, then Poland’s Abel Korzeniowski has re-incarnated himself as that most darkly romantic of all American movie composers in service of the impeccable, Hitchcockian spirit of fashion designed-turned-filmmaker Tom Ford. Now they move together from the positively demure SINGLE MAN to the cunning sordidness of NOCTURNAL ANIMALS as done up in the height of LA art chic-meets white trash murderousness, Given a multi-story enigma of a film, Korzeniowski’s ultra-lush themes beautifully dress up unspeakable behavior, a rapture of erotic orchestral melody whose contrast with the onscreen grotesqueries is exactly the point as his music shivers with anticipation towards the next shocking chapter. Scores rarely get this operatic in their unrestrained string and piano passion, an unabashed approach that I’m sure Herrmann himself would be beguiled by as he might hear Korzeniowski raising his ghost in the height of style.

Having done the animated soundtracks for the transcontinental boy’s adventure ZAFARA and the distinctly adult horror anthology FEARS OF THE DARK, French composer Laurent Perez Del Mar gets marooned on a desert island with beautifully poetic results in THE RED TURTLE. For what’s essentially a cartoon version of CASTAWAY that’s even more movingly profound, Del Mar draws upon an elemental spirit of flowing, gentle melody and rhythmic danger, his score all the more vital in serving as storytelling, given that barely a word is uttered in this movie. With a haunting theme that’s often accompanied by female voice, Del Mar’s flowing orchestral melody captures a lyricism that’s worthy of Debussy’s “La Mer” in communicating the literally transformative effect of nature on man, his lovely themes for aching violin capturing despair and acceptance, playful pizzicatos embodying a renewed sense of hope (as well as endearingly comic crabs) and exotic percussion hearing the mystery of an island and its outlying sea. Like Michael Dubo de Wit’s remarkable film that draws upon the pastel naturalism of Hayao Miyazaki’s Studio Ghibli for what might be their best film in a line of classics, Del Mar’s music is the equivalent of those soft brushstrokes on a big screen canvas of visual poetry, a score that profoundly captures a life at first seemingly lost at sea, only to soar under, and above it though its graceful music that touches the silent tides of nature’s life force.

An accomplished jazz musician and connoisseur of America’s musical art form well beyond his other gigs of directing and acting, Clint Eastwood’s scores have always been about memorable thematic simplicity, memorable melodies that other artists have helped him expound upon in such scores as UNFORGIVEN and FLAGS OF OUR FATHERS. But never has Eastwood’s restrained jazz approach proved so unusual, or impactful than in the place of what’s essentially a disaster film with SULLY, whose cockpit is comfortably filled in by artists Christian Jacob, Tierney Sutton and her band. With the score never overplaying the already heightened drama of the most miraculous crash landing ever, SULLY‘s uses the cool of jazz to represent the spirit of a captain who remained the height of calm under pressure. It’s an unexpected, tuneful approach that proves tremendously moving, particularly when Sutton gives turns the theme into song with “Flying Home.”

A composer who certainly knows his way around sci-fi scoring with the likes of BATTLESTAR GALACTICA and EUROPA REPORT gets to enter The Twilight Zone in the confines of a crazed survivalist’s bunker. Leave it to McCreary’s cat-and-crazy symphonic suspense for its heroine to explore the nooks and crannies of his “Lane’s” confines when the composer isn’t rushing for the escape hatch, finally opening up the score’s impressive thematic structure to take on space invader proportions worthy of John Williams. It’s an A-plus lesson in how to exhilaratingly milk a potentially claustrophobic soundtrack situation for all of its big reveal worth.

Photo composites by Robyn Young. Special thanks to Travis Bradbury

Related: THE BEST SCORES OF 2016 – PART 2 – The Runners Up and Composers to Watch