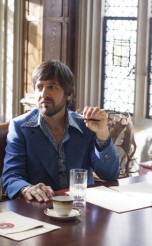 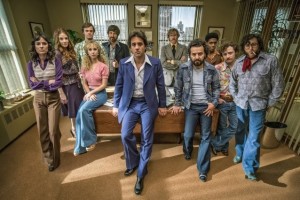 HBO’s VINYL, which has its first-season finale Sunday April 17, and is renewed for next year, deals with the rock music scene in New York of the 1970s. Between two of the executive producers, Mick Jagger and Martin Scorsese (who directed the premiere episode), a lot of knowledge about the milieu, the era and the environment has gone into this tale of struggling record mogul Richie Finestra, portrayed by Bobby Cannavale.

Ray Romano, known for starring in the half-hour comedy EVERYBODY LOVES RAYMOND, the hour-long dramedy MEN OF A CERTAIN AGE and his stand-up work, has a change-of-pace role on VINYL as Richie’s bitter, not especially loyal associate Zak Yankovich.

AX: What kind of music do you like personally?

AX: You were saying earlier that VINYL is all so cool, it seems surreal. Is there a sense of coolness on this that has not been on your other projects?

ROMANO: I don’t even think you have to ask that question. I mean, it depends on what your definition of “cool” is.

ROMANO: Meeting Mick Jagger, snorting fake coke, hanging out with fake hookers, and I go to the totally other side of the road. Beating up Bobby Cannavale – we go at it in one episode. It’s nothing I’ve ever done before, nothing as edgy and as dark as this, and there’s humor also. So yeah, it’s everything.

AX: Was your experience of the Seventies anything like your character’s?

ROMANO: No, I never lived in the fast lane like that. As far as that end of it goes, my story’s kind of boring when I was growing up. I snorted coke for the first time on this show, and it was fake coke. I never did it in my life. So it’s fun to play it, but I don’t have anything to draw on, really.

ROMANO: Look, it was ten years since RAYMOND. They knew I wasn’t going to do a sitcom again, they knew I didn’t want to do a straight, wall-to-wall comedy. And the cool thing was, Marty had never heard of me, never saw me. So when I sent my audition tape, he was seeing me for the first time. And that was like a blessing in disguise.

AX: Do you think you’ll ever do television comedy again?

ROMANO: I can safely say I’m never going to do a multi-camera sitcom [again]. Because I did it. I don’t want to have to follow what I did. If that’s my legacy, that’s fine. I want to do comedy again, of course. I do comedy in this. But multi-cam, I’m happy with the way I left it.

AX: Why specifically do you think RAYMOND was such a long-lasting hit?

AX: And they’re remaking it in a lot of those countries, right?

AX: Do you want EVERYBODY LOVES RAYMOND to be your legacy?

ROMANO: I want to keep it going. I don’t mind that that’s part of it, I don’t mind that that’s that genre, I made my mark in that genre, but I’m only happy if I’m doing something. I’m not going to retire, really, so I’d like to do something great again. I still do stand-up. I don’t do it as much, but one of the things that was good about this was, it filmed in New York, so I got to hang out at the clubs where I started. I was five blocks from the Comedy Cellar down in the Village where I started, so on the nights I wasn’t working, I would go down and come up with some new material. That’s always exciting. And I still play Vegas three, four, five times a year, and I do a lot of charities.

AX: Is working the big rooms in Vegas the same as doing the small clubs in New York?

ROMANO: No. When I go from Vegas and I go back to my club in the city, it takes a set or two to get your small-club legs. I don’t know if you’ve ever been to the New York Comedy Cellar, but it’s the most intimate club there is. And you’ve got to approach it. On a [big casino] stage, you can be big and present the floor. Here, it’s more casual, it’s more conversational.

AX: Is it more enjoyable?

ROMANO: It can be. I don’t know. Each one is hard for different reasons. But I think it’s more enjoyable for me doing the intimate setting, and having a great show there. When you’re on a [big] stage, you don’t even see the audience, with the lights. The [club] audience, it’s more personal, you see the faces. So in that way, it’s a little more enjoyable. I like them both.

AX: In working with Mick Jagger and Martin Scorsese, have you learned anything from them?

ROMANO: Well, Mick I only met once, but for Marty, first of all, I knew he was a genius when it came to films and all, and his knowledge of films, but I had no idea – every conversation we had, he referenced an old movie from the Fifties. I told him about my life, and the watermelon man that woke us up in the morning, and he’d go, “Oh, that’s just like such-and-such movie!” And then the next day, in my dressing room, the DVD of that movie would be there, he’d have somebody get it. And just to talk to him and see the wealth of knowledge – he knew that I didn’t know anything, but he loved to talk about it. And also, he let us do our thing acting-wise. He opened it up to us and let us improvise here and there. So that was very cool. And the energy and the enthusiasm he has – again, I’d never met him [before]. So it was all exciting to experience.

AX: What’s your own relationship to music?

ROMANO: Do I play anything? My mother’s a Juilliard graduate, she studied to be a concert pianist, and then she gave it up to have a family, so she taught for fifty years, she taught us piano. I play a little piano, and I played drums – I annoyed my parents when I did a little bit of drums, but otherwise, I like all types of music. I can’t specify one, but I’m a rock ballad guy. I like rock ballads.

ROMANO: I lost my virginity to the first three minutes of “Stairway to Heaven,” so try that one [laughs].

AX: Is there something musical to the way you do stand-up?

ROMANO: I don’t know if it’s musical, but comedy is like music. The wrong word is like a wrong note, there’s rhythm to it, so in that sense, yeah. I’ve always said that, that it’s – “Okay, this phrase is funny if you put it here instead of here.” It’s kind of like music.

AX: You were one of the last guests on LETTERMAN. What was that like for you?

ROMANO: It was emotional. Everything you heard on there is true. That’s where it started. If I had to pick the turning point in my career path, in my life, it’s that set that I did on LETTERMAN. So now that the show’s over, and ten years later, and I’m at a part of my life – I’m at a weird age in my life, what’s left, what I have left to do – and then to have this show end that was so instrumental – it’s like losing something, part of your history, part of your memory. So it was all real. I’m glad – I get a lot of response from that appearance, and I’m happy, because it was all genuine.

This interview was conducted during HBO’s portion of the most recent Television Critics Association press tour in Pasadena, Calif.