Home » The X-Files My Struggle review 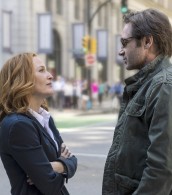 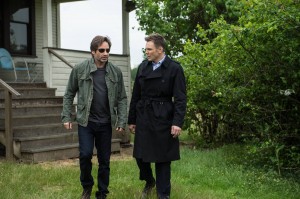 So THE X-FILES is back and it is the first time we have seen Mulder (David Duchovny) and Scully (Gillian Anderson) on television for the first time since 2002 and … well, it should have been a bigger deal, right?

It seems that “My Struggle” was more concerned about cramming as much as it could about the past nine seasons into one episode rather than about the reunion of these beloved characters and what it meant to fans and just the whole mythology of the show in general. Now, that isn’t necessarily a bad thing, tying everything up and beginning in a new direction. I just wish there was more weight given to the reunion, the characters and what them coming back to the FBI meant as a whole.

The opening of the episode was a summation of everything that had come before in the show – how Mulder got started in his search for his sister and wanting to believe aliens actually existed and visited Earth (maybe numerous times). It also showed the struggles they had with the government and a larger conspiracy to hide the truth that was curtailing them at every turn.

When we see Scully it is a nice moment to see her continuing her work to help people through medicine but quickly once she is talking with Mulder we see that the two have grown apart and are no longer the happy couple that was portrayed at the end of the last movie. When a loud TV personality, Tad O’Malley (Joel McHale), claims to have answers to the questions Mulder has been seeking his whole life, Mulder is pulled again into the world which has taken so much from him.

And O’Malley does have the answers as it turns out. Everything that Mulder had been led to believe in the previous nine seasons were all a smokescreen for a secret multi-national, multi-corporation conspiracy that has been using alien technology (recovered after the Area 51 incident) to pretend aliens have been abducting people and causing UFO sightings. That’s right, there are no aliens on Earth and they haven’t been abducting people, it was humans causing fear and chaos. The UFOs were developed based on Area 51 technology but also flown by humans to give the impression aliens were conducting experiments on people. The reason? It is a ruse in order for this conspiracy to eventually take over America and later the world.

Can you see Dr. Evil with his pinky finger near his mouth yet?

So “My Struggle” puts the kibosh on everything THE X-FILES has been about in the prior nine seasons but it does open up a new direction for the show in trying to uncover the truth about this takeover attempt and the multi-corporation entity trying to use technology for fear mongering. While this big reveal is weighty on the surface, the way it is delivered by saying every crazy conspiracy theory is actually true with snippets of anything from President Bush speeches to drones to global warming and chem trails is very convoluted.

There is so much going on that the reason we are all watching the show – Mulder and Scully coming back to TV and The X-Files inside the FBI – is muted. That said, just having the show back is a fun ride and hopefully the monster-of-the-week episodes coming up (which has arguably always been where THE X-FILES shines) will prove to be more focused and enjoyable.