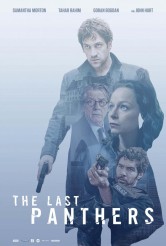 The producer also talks THIS IS ENGLAND and the Brexit

THE LAST PANTHERS, which originally aired on Sundance TV, is now available in its entirety on Hulu. The six-part series travels all over Europe as a British insurance investigator (Samantha Morton) and a Marseille police detective (Tahar Rahim) find themselves submerged in a complicated criminal underground. John Hurt also stars.

Peter Carlton, the Englishman who produced THE LAST PANTHERS, speaks at a Q&A panel about the show. Afterwards, Carlton takes time for a one on one conversation about the series, his decades-spanning work on THIS IS ENGLAND, and how Brexit – Britain’s imminent departure from the European Union – may affect England and its television industry.

Speaking about how THE LAST PANTHERS came to be made in the first place, Carlton explains, “PANTHERS was jointly created. The original idea came from a journalist, Jerome Pierrat, who is one of the leading experts in Europe on organized crime, and Jack Thorne, the writer, who’s probably best known now for having [co-written the stage play] HARRY POTTER AND THE CURSED CHILD. But he did THE LAST PANTHERS before that and, in fact, also writes THIS IS ENGLAND, and a huge amount of that process was about Jack writing storyline. We did a lot of research and Jack was flying around Marseille and Belgrade on the back of Jerome’s scooter, and we were going into no-go [housing] projects and all kinds of stuff. And then Jack would turn all of this into fiction, and Jerome would go, ‘No, no, no, no, no. It can’t work like that.’ And then Jack would go, ‘Yeah, but it can’t happen like that [what Pierrat proposed] because of drama.’ So I think those are the different constraints.

“On the other hand, what you’ve got is the benefit, particularly as we did [of filming] in real locations, which is quite unusual. We didn’t do any of that filming somewhere else for tax reasons or addressing something [else related to finances]. It was literally filmed in the places where those stories came from. So then you have the gift of an almost documentary quality of being able to follow what’s actually there. And there’s a freedom to that, but there’s also a constraint as well.”

ASSIGNMENT X: Is it easier to create contemporary stories or historical stories?

PETER CARLTON: Obviously, THE LAST PANTHERS is very contemporary. In fact, had we known what was going to happen in Britain with Brexit, we might have been slightly less critical of the E.U. [European Union] in the series. But we also do a show called THIS IS ENGLAND, which is set in the Eighties. And of course, the great thing about setting anything in period is, you know what happened. So you are never going to get a situation where your show is somehow taken over by current events. And in a sense, there’s a comfort in that as well, as a limitation as to how much you can reinvent history. When you are doing something contemporary, it’s a real challenge because, on the one hand, it’s storytelling. It has to be entertaining, it has to, in a sense, obey the rules of drama, but it also has to be real. It’s like, somebody can always put their hand up and go, “It’s not happening like that,” or, by the time you have made your show and it is going out, world events can have taken it over.

AX: How closed-ended is THE LAST PANTHERS? Could you make a second season?

CARLTON: Well, without giving too much away, quite a few people die [laughs], but it was always intended as limited. Of course, you can always pick up a character and go elsewhere with it, but we really felt we wanted to capture a moment. And in some ways, it’s like making a movie, where you just go, “That is the story, and we want to tell it within this framework.” I’m a big fan of limited series. We have some other things that are returning, and that’s great, to expand the universe. But sometimes it’s really nice to just go into a place and go, “It’s done, and we’re proud of it, and it was that moment, and now let’s move on.” And I think that’s the case with PANTHERS.

AX: Who actually made THE LAST PANTHERS?

CARLTON: It was principally Sky in Europe, co-producing with Canalt. So Sky in England, Germany, Italy, Ireland, Australia, and Canalt in France. But we had a dialogue with Sundance and Hulu. So they came in during the stage of production. And then, beyond that, it’s gone out, so there’s a consciousness about the core audiences you are making it for, and I guess it was quite important that those core audiences [are] Hulu’s demographic, or at least how they would position the show, what Sundance would do, what Sky and what Canalt would do would have a kind of coherence. And that’s one of the reasons why we were able to make one version of the show [that worked for all of the countries involved]. But then I think, as Jessica [Pope] says, you are very conscious that you are making global television now and that it has to resonate and make sense everywhere.

AX: Besides affecting the storylines of shows you’re making now, is Brexit affecting British television in terms of either subject matter or people being too obsessed to do anything except discuss it, or …?

CARLTON: Well, there were a couple of weeks where we all just lay under our kitchen tables with our hands over our heads. I think what we seem to have done is sort of a warning note to everybody – “Don’t just do a protest vote without thinking, guys.” That would be my message to the world [laughs]. But no. What it has done is created an uncertainty, and that’s very difficult to live with. But in another way, it’s really made the debate very, very engaged. And certainly, for us, it’s interesting. We’re developing shows with American networks, we’re developing shows in Germany and in France, and in the U.K., and what was interesting is, that’s a very – there’s a cultural thing, in the sense that we’ve made shows that we’ve talked to those buyers about, and they want them and Brexit isn’t affecting that in any way, it really isn’t. I think what will happen is, we’re going to have to figure out how to deal with that inflection, particularly for our own audience, and our own country, and that will be interesting. Because Britain really feels like a different place.

What I think what it [Brexit] has done is made the divisions more obvious. In a way what it’s done is woken up the genuinely pro-European camp. Not necessarily pro-E.U., because in a way, there are many things wrong with E.U. But actually, a sense that we [in the U.K.] aren’t a tidy island, that actually we are a country that’s always had a global and a mixed culture. We’re a wonderfully mongrel nation. And we do feel very much a part of that collection of countries and people that is Europe. And that was certainly the experience of making THE LAST PANTHERS. I found myself fantastically at home, working with all these other people. So maybe it in some ways will make storytelling more diverse, rather than less, interestingly.

AX: As a reaction to Brexit?

CARLTON: Yeah, I think so, that sort of culturally, we’re going to hang onto that and celebrate that thing, rather than shrinking back. There’s a terror of going, “Oh, my God, Britain could just look very small and irrelevant.” And we don’t really want to do that.

AX: With THIS IS ENGLAND, since you keep moving along every few years, and set each series in a different time period, might you move it into the Brexit?

CARLTON: Jack Thorne, who’s the writer, and Shane [Meadows, the director], who’s obviously in big measure the creator of this thing, very much felt that chapter was closed. And I think, as he said, what was it, it was “A full stop in pencil. It can always be rubbed out, and we could always move on.” And I guess he might be motivated to revisit those lives. I think never say never, but I think he felt he’d said what he wanted to say about that bunch of people for the moment, so they’re staying in the cupboard for a while at the moment – no plans to bring them out just yet.

AX: So you might do something else entirely about the Brexit?

CARLTON: We might well do something else entirely about the Brexit. I mean, I think what will happen is, it will kind of inflect things. We’re doing a couple of shows set in the north of England at the moment, and one, called ROBIN OF LOXLEY, is very much in a weird way about the heart of Brexit country. It’s places where there are no jobs, where people get by on the black market – it’s a kind of reimagining of Robin Hood, robbing from the rich to serve the poor. Just getting by, by blagging [fencing stolen] stuff. And I’m sure that will get inflected by the current debates about why we’re in the state we’re in. And it’s a comedy/drama, so it will do it with lightness of touch, I hope. But it’s a massive sea change for our culture. And so it’s going to be reflected in our stories that we tell in loads of different ways, I think.

This interview was conducted during Hulu’s portion of the summer 2016 Television Critics Association press tour at the Beverly Hilton Hotel.