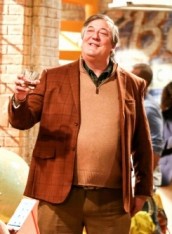 The actor talks his new CBS comedy and more 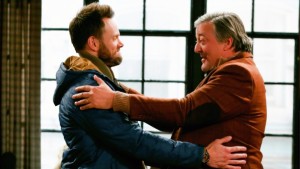 Joel McHale and Stephen Fry in THE GREAT INDOORS | © 2016 CBS

Stephen Fry is one of those protean creative people who seems to have done everything. The Englishman was part of the Cambridge (University) Footlights Revue, a regular in BLACKADDER alongside Hugh Laurie, who became his partner in comedy in the series JEEVES & WOOSTER and then A BIT OF FRY & LAURIE, a novelist, an essayist, a playwright and a film actor.

Now Fry is a regular in CBS’s new Thursday night half-hour comedy THE GREAT INDOORS. Fry plays Roland, the jovial boss of an outdoors magazine who is not greatly bothered by the discomfort of reporter Jack, played by Joel McHale.

Sitting down with Fry at an open-air event, the conversation ranges from, THE GREAT INDOORS, to general creation of roles, to the unexpected (women’s footwear).

AX: What drew you to THE GREAT INDOORS?

STEPHEN FRY: Well, it was the script. Without wishing to sound braggodocious, I get sent quite a fair amount of scripts. And really, I try as hard as possible to react purely to my feeling about the script, not necessarily where it comes from or how powerful the production company who’ve sent it is. As it happens, obviously, this came very much with a blue ribbon. It was CBS Studios, CBS Network, Mike Gibbons, who’s a marvelous writer who I’d heard of because of the work he’d been doing with James Corden, when James arrived to take over from Craig Ferguson at CBS for THE LATE LATE SHOW. But it was just the story and the sheer delight of it. You just picture yourself doing the role – “Yeah, I could be happy doing that.”

AX: Were you also a fan of Joel McHale’s from THE SOUP?

FRY: I was. Actually, I’ll be honest with you – his shows don’t really play in the U.K. When I heard his name, I thought, “I know that name. I know Joel McCrea. That’s not him. He’s dead.” I remember Joel McCrea, but he was before my time, before any of our times. But as soon as I saw [McHale’s] picture, I thought, “Oh, yes, THE SOUP.” I remember THE SOUP on E. Sometimes when I came over here to do other work, you’d be skipping through the channels, and you know how it is when you go through the stations. You always hit a commercial or a really bad program, and you think, “There’s nothing on the two hundred channels that are available.” But whenever I stopped on him, he was doing something just a bit classier. So I always remembered him. And he is a classy performer, a very witty guy.

AX: You create and write a lot of your own projects, scripts and novels and more. How is THE GREAT INDOORS fitting into the timeline of your own creativity?

FRY: So far, pretty well. I write very early in the morning indeed, so I can get in two or three hours of writing every day before I have to go to rehearsals, and that helps me enormously.

AX: Is performing somebody else’s script sort of a good palate cleanser?

FRY: Oh, it’s lovely. That’s exactly what it is. It’s a great relief, a nice feeling. It’s like playing a trust game where you lean back, knowing someone’s going to catch you. And of course, these things are always open – everyone makes suggestions and tries to add something. It’s a bad mix if you don’t feel confident to shout out an idea, even a useless one. And you’ve got to have that kind of atmosphere in the room. And we did from the pilot, and I’m sure we will [going forward].

[Reporter and subject are both momentarily distracted by the exceptionally high heels of a woman’s shoes as she passes.]

FRY: There are some heels here tonight. I was really impressed. Did you follow that story, when at the Cannes Film Festival, they turned a woman back at the Croissette for wearing flats, and the next day, all the big stars, Cate Blanchett, turned up with flats. “Why aren’t you turning me away? I’m wearing flats.” They said, “No, it is okay.” “But you turned that woman away yesterday. It’s a disgrace. I want a public statement that it’s okay for women to wear the heels they want to wear.” For all they knew, that woman [in the first set of flats] had a Plantar condition on her heels or on her soles.

AX: Have you ever done drag, where you’ve had to wear high heels?

FRY: Yes. Hugh Laurie and I used to do a comedy show in the Eighties for many years, and we often had to dress as women. There was a shop in Camden in London called Transformations, and they used to see me coming and go, “Oh, my God,” because I’m a size thirteen-and-a-half/fourteen American. They specialized in that. And I had to learn that thing of walking toe to heel. Because we walk heel to toe, and you can’t do that in long heels, or you’ll snap them. And so you’re throwing all your weight forward onto your toes. It’s very unhealthy.

AX: Anyway, how much creation is involved with your GREAT INDOORS character Roland, and how much is it the producers saying, “We would like Stephen Fry to be urbane and be Joel McHale’s boss in this”?

FRY: Well, I think that’s very right. I don’t have to go into a four-hour makeup, and I don’t have to channel some extraordinarily different sort of figure. I think a lot of acting is – you know what they said about Michelangelo supposedly telling a friend when he had this big lump of Carrera marble, “The statue’s already in there – I just have to know which bits to take away.” And that’s true. The David was inside a lump of marble. He just took away the bits that weren’t the statue, the sculpture. And my favorite film actors are people like Jimmy Stewart and James Cagney and Spencer Tracy. They’re always the same person. What they’re doing, though, is they’re taking away the bits of themselves that aren’t the character they’re playing. So I’m taking away the bits of me that are a Richard Wagner fan and love Noel Coward, or are slightly camp and gay. I’m finding those bits of me that are actually slightly straighter and slightly different, of which there are plenty of bits.

FRY: Comedy, yes, where I play really blustery, angry, bitter people, who have a kind of confidence and real diablerie that I don’t have, but I find that harder in straight roles in drama.

AX: You had a recurring role as a psychiatrist on BONES for a couple of seasons. They’re now going into their final season. Might you show up on BONES again in its last year?

FRY: That would be nice. I’m so fond of that show and the people who run it and of course for [leads] Emily [Deschanel] and David [Boreanaz], who are such wonderful people. My goodness, what is it now, twelve seasons? I mean, it’s incredible.

FRY: I don’t think the legendary and immortal and we bow our heads at the mention of his name Sumner Redstone actually invented the phrase “Content is king,” but he’s certainly credited to some extent with the popularization of phrase. I think he obviously oversaw a lot of changes of mode and medium. But that’s changing the pipelines. Whether you use your rubber pipeline or a plastic pipeline, the oil is still the same stuff inside. And I think in the end, telling stories, presenting characters, telling jokes, making people happy or scared, whatever it is that drama and comedy can do, that doesn’t change. And similarly, it doesn’t change writing a story whether you’re using a word processor, a typewriter or a pencil. That’s all it is – they’re just details, really.

FRY: None that you should know about yet, but I have two in particular that I’m working on.

AX: What would you most like people to know about THE GREAT INDOORS?

FRY: I think that it is in the great tradition of a sitcom, in that it is essentially like a family, but it’s a workplace family, and they’re not all related to each other. I think people will look at it and they’ll see themselves and they’ll laugh, and that’s I hope a good thing.

This interview was conducted during CBS’s party for the 2016 summer Television Critics Association press tour.