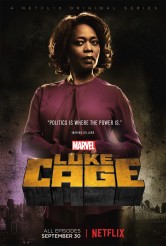 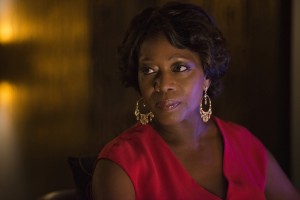 In LUKE CAGE, Marvel’s Netflix series about the reluctant hero (Mike Colter) with indestructible skin, Alfre Woodard plays Mariah Dillard. Mariah is a councilwoman in Harlem, outwardly the picture of respectability. However, Maria’s cousin is local crime kingpin Cornell “Cottonmouth” Stokes (Mahershala Ali), and she’s got her own backdoor deals going on. Both of them tangle with Luke.

Woodard was nominated for an Oscar for her supporting role in CROSS CREEK. She’s also amassed four Emmys and a collection of other awards.

ASSIGNMENT X: Were you looking to play somebody like Mariah? How would you describe her?

ALFRE WOODARD: I think she’s a contemporary woman, she’s powerful, she grew up in a world where she saw her grandmom be successful by providing services and knowing what part of the food chain to provide those services to, so she’s got some power, and so I’ve been around – I’ve seen the women that work around and for [Mariah’s grandmother] Mom Mabel, how they wield power, so there’s something about that. I think Mariah works with her mind, and also her elan in a man’s world to get what she wants. And she doesn’t want to get anything from them, she wants to use her power to control power that’s even stronger. So I think we go to that as women.

AX: “Elan” might be the right word. She seems a little more – seductive isn’t quite the word I’m looking for – but she seems to have a little more of that quality than a lot of other politicians …

WOODARD: Well, it’s because, I think, in the real political world, women are punished and they’re looked down upon, first of all, for paying attention to their looks, but then if they don’t, the first thing they say about them is, “Why hasn’t she had her face lifted? She needs to have her hair cut. She’s got on a boxy dress.” But they don’t say that about men. So women try to play themselves down in the political world, so that they are not criticized for their womanliness, the thing that defines us physically, but at the same time, she grew up in Harlem. And Harlem is a culture that is central, at the same time that it is artistic and creative. So I think she’s very aware of the way her hips swing when she walks, because it’s supposed to swing when you walk. She doesn’t deny it. And her constituency has been a rhythmic atmosphere that doesn’t deny that and doesn’t criticize that.

AX: As LUKE CAGE takes place in the Marvel universe, where the Avengers vs. aliens battle just rearranged Manhattan not long ago, how much do you think Mariah is aware of the Avengers and people with superpowers? Is that in her consciousness at all?

WOODARD: Yes, I know. I’ve heard about all the super-enhanced people around the island. The thing is, as a person of power, I know that I need to get hold of some of them. If I can’t control them, then we need to shut them down. But I want to meet Luke Cage, because I can use Luke Cage towards my ends. And my ends are positive. I want to make a difference in this city, I want to change things in this city. And so it’s just like you bring anything into your command that will help you do that, so I can’t fight Luke Cage, but I sure could figure out how to get him to help me.

This interview was conducted during Netflix’s portion of the summer 2016 Television Critics Association press tour.