© 2016 Discovery Channel
Michiel Huisman in HARLEY AND THE DAVIDSONS
Interviews

The actor talks playing a maverick 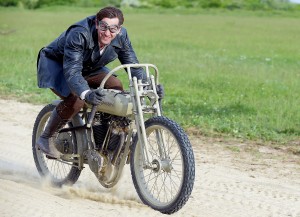 Michiel Huisman in HARLEY AND THE DAVIDSONS | © 2016 Discovery Channel

Michiel Huisman (pronounced Michael HIGHS-man) may be a familiar face to those who’ve seen the films THE AGE OF ADALINE, THE INVITATION and/or WILD. The actor from the Netherlands was also a series regular on TREME and recurred on NASHVILLE.

But what Huisman has really been known for in the past few years is playing the object of female desire on propulsive genre fare. Until recently, he played Daario Naaharis, consort of Emilia Clarke’s Daenerys Targaryen, on GAME OF THRONES and the former arms dealer Cal who fathered a child with Tatiana Maslany’s Sarah Manning on ORPHAN BLACK.

Now Huisman is onscreen as a very different kind of character in a very different project. In the three-night Discovery Channel miniseries HARLEY AND THE DAVIDSONS, which begins Monday, September 5, we see the beginnings of the motorcycle-making business in the early twentieth century. Huisman plays motorcycle company cofounder Walter Davidson.

At a panel hosted by Discovery Channel for the summer 2016 Television Critics Association press tour, Huisman explains that he was attracted to the writing of the three fact-based characters – Walter Davidson, his brother Arthur, played by Bug Hall, and William Harley, portrayed by Robert Aramayo (who coincidentally is also on GAME OF THRONES as the young Eddard Stark).

“I think what stood out to me is how individual they were,” Huisman says, “and how much they complemented each other. I don’t think the company could have become what it became without any one of them. They really needed each other.”

Huisman adds that he enjoyed having the opportunity to ride the realistic copies of the period motorcycles. “I was one of the guys that was lucky enough to ride [HARLEY AND THE DAVIDSONS’ motorcycle maker] Alex Wheeler’s bikes.”

At a party thrown that evening by Discovery Channel at the Petersen Automotive Museum in Los Angeles, Huisman goes into more detail about playing a real man who helped spark a phenomenon that’s lasted over a century.

ASSIGNMENT X: Were you interested in motorcycles before you got involved with HARLEY AND THE DAVIDSONS?

MICHIEL HUISMAN: Yes, absolutely. When I was sixteen, I started riding vintage Italian Vespa scooters, because I just loved the way they looked. And then when I was old enough, I got my first motorcycle, and all throughout my twenties, I rode motorcycles thinking I would never, ever get in a car, until it just turned out to be not always practical [laughs].

AX: In HARLEY, you’re on authentically-built to the period Harley-Davidson motorcycles …

HUISMAN: Yes. Check it out. That’s me on an authentically-built, eight-valve [motorcycle]. But that would have been a replica, or like a prototype. The prototype doesn’t exist anymore of that eight-valve. So we had a total of eighty replicas built especially for the show, and I can tell you that I rode every single one of them.

AX: Did you experience a kind a thrill of discovery with that, or was part of you just going, “Oh, my God, this is horrible, thank God motorcycles have evolved since these first ones were made”?

HUISMAN: It does really renew my respect for new bikes. They’ve really come a long, long way. But it was very exciting. For example, this bike that we’re seeing now, which is still the eight-valve Racer, it was so powerful that we were only using one of the two cylinders, because it was just way too strong, way too fast [laughs]. So it was really exciting.

HUISMAN: It’s not the first time I’ve played someone who actually existed. I’ve done that before, and like the first time, this time I really enjoyed being able to research a character and try to find whatever stories are available on the person’s life. In [this] case, there’s not a lot written about Walter Davidson or who he was, but I was able to find quite a bit of quotes of his, which helped feeding into my imagination, I think. By the way, [about] playing an inventor – I think between the three founders, Bill Harley is probably the inventor, and it’s my brother Arthur Davidson, who sees the potential in finding a market and selling it. I think Walter Davidson is less an inventor and more the driving power. He is a man who’s a little bit of a rebel himself, he’s a little bit of an anti-establishment, or definitely anti-authority kind of guy, and that’s exactly what the other founders needed to eventually find themselves in creating the bike that stood out. He’s not so much the inventor.

AX: But Walter Davidson may be the person who set the archetype for our idea of a motorcycle man?

HUISMAN: Absolutely. I love that idea of Walter being a one-man motorcycle gang.

HUISMAN: Yes. He sets the tone for a group, or a culture, but he’s not aware of that. I think in many ways, he maybe is a little bit of a loner. I think his wish for the motorcycles and for their potential really comes from something that he wants for himself. He is a thrill-seeker. He loves motorcycles, he wants to go faster. It’s not until that it all takes off that all of a sudden, everybody says, “Whoa, is this becoming a culture or something?
AX: Were you looking to play somebody who wasn’t defined by his romantic relationships?

Not that I would guess there’s anything to complain about working opposite Tatiana Maslany or Emilia Clarke.

HUISMAN: No, there’s not. But that’s totally not what this story is about. Although it’s not like it’s only about motorcycles. It’s really about friendship, perseverance, early entrepreneurs, last of the new frontier, in my mind. So it was an amazing project to be a part of.

AX: What would you most like people to know about HARLEY AND THE DAVIDSONS?

HUISMAN: That it’s an incredibly spectacular story about friendship and the founding of a true American brand.