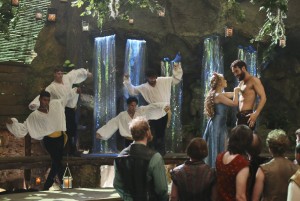 Tony- and multi-Oscar-winning composer Alan Menken is both theatre and motion picture musical royalty. Collaborating with the late Howard Ashman, he wrote the songs for LITTLE SHOP OF HORRORS,THE LITTLE MERMAID, BEAUTY AND THE BEAST and ALADDIN. Following Ashman’s death in 1991, Menken has also worked with lyricists Stephen Schwartz and Tim Rice, but lately, he’s often teamed up with lyricist Glenn Slater on projects including Disney’s film TANGLED and the TV series THE NEIGHBORS.

Now Menken and Slater are working together with writer Dan Fogelman on the TV musical comedy GALAVANT. The ABC series, now in its second season Sundays at 8 PM, features the adventures of the title medieval knight (Joshua Sasse), on a variety of quests to rescue damsels, save kingdoms and generally engage in some exploits that are more Pythonesque than princely. To wit, the Season 2 opener includes the Menken/Slater song “A New Season, aka Suck It Cancellation Bear.”

ABC arranges for Menken to sit at a piano and serenade a rapt group from the Television Critics Association during a press tour. Following this, he and Slater make themselves available for some questions.

ASSIGNMENT X: How did the two of you begin working together?

ALAN MENKEN: Disney sent him to me through a representative, and he was recommended to me as a collaborator, and the first thing we worked on together, actually, was a prequel to ROGER RABBIT, called WHO DISCOVERED ROGER RABBIT?

AX: What happened with that project?

MENKEN: The budget came in at like 500 million or something. It was a prequel, so it was the story of how Roger got to L.A., and it was a parody of the old MGM musicals, rather than the film noir. Then we did SWEATING BULLETS, which was a Western, which became HOME ON THE RANGE. You know what? I loved working on that, I loved the score, but –

GLENN SLATER: It didn’t click with audiences the way the other ones did.

AX: Over time, have you noticed thematic shifts or changes in the stories that are being told that you’re writing music for?

MENKEN: Sometimes I find I’m going back to where I was forty years ago, thirty years ago, whatever. But I will say that I think there’s a lot more consciousness of writing for today’s political realities that there was thirty years ago. There’s much more of an effort to be inclusive to various ethnic groups, to make sure that women are portrayed the way they are in the real world and not the way they are in the fairytales of forty years ago. There’s been an awakening that, in animated film in particular and in fairy stories, because of the responsibility we have to children, everybody’s much more aware of that.

AX: How aware were you of Alan Menken before you began working together?

SLATER: I was in college when the two of them [Menken and Ashman] did their run of the great Disney movies, and I looked up to that stuff. That was sort of my primer on how to learn how to do this.

AX: To ask a scheduling question, do you have the time to work on the songs for GALAVANT that you would normally have to work on songs, or is it all accelerated because it’s for a television series?

MENKEN: It’s all accelerated. Crazy accelerated [laughs]. But you know what? Everything we have done, together or separately, leading up to this, has actually trained us to do this. We’re very well trained to take on doing something like this, because we have a very good shorthand. When we work on shows, we work quickly, and we do about a song a week. So that’s a Broadway show – we can write the whole score in four months, which is very fast. For this, we were writing three songs a week, sometimes more.

AX: How do you work with Dan Fogelman in terms of what the songs are and where they go? Does he say, “Here’s the script, we need a song about this here,” or …?

MENKEN: Oh, no. Dan has basically a show bible at the top of a season, where “I want it to go to these places.” And then we sit down together and we brainstorm about how it can be musicalized. Sometimes, if we have a particularly good idea, he’ll adjust the story. Sometimes, Dan will have something he wants, and we will accommodate it. Dan has the advantage of being a very pleasant guy, a really genuinely nice guy, so to fight with Dan, you just don’t want to. He’s so smart and so well-intentioned. There will be times when he will want something and we’ll say, “I’m not sure,” but we’ll go there. Sometimes, we’ll say, “We want something,” he’s not sure, but he’ll go there. We dance well together. He knows the medium so well that, when  it’s a question of what’s going to play on TV, we automatically defer to him. But when it’s a question of how to blend music with drama, because it’s what we do, he’ll defer to us quite often.

AX: It’s a little early to ask about Season 2, but do you have a favorite Season 1 song?

MENKEN: I’m going to say maybe my very favorite is the last song in the last [Season 1] episode. It’s “Goodnight, My Friend.” I have a soft spot for that one, because it’s one of the very few songs that’s actually straight – that’s not mocking itself or mocking anybody, it’s one of the few that has real emotion. As I always say, they’re all my children. Each one has their own strengths and they all support each other.

MENKEN: It’s a weekly musical and it’s fun and it’s got an A team working on it who are excited and having a great time.

SLATER: Even if you think you don’t like musicals, it’s not your ordinary musical and it’s funny, and you will laugh, and you will just have a blast.