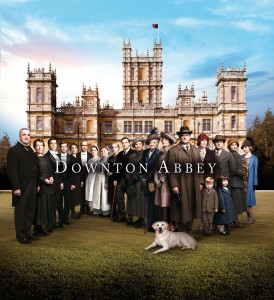 DOWNTON ABBEY commences its fifth season on PBS Sunday, January 4, at 9 PM. The beloved British import chronicling the lives of the titled Crawley family and their servants is now firmly immersed in the Twenties, when social change is afoot.

Executive producer Gareth Neame, also one of the executive producers of SHAKESPEARE UNCOVERED, which will have a new season on PBS as well, takes a moment to talk about DOWNTON‘s international success.

ASSIGNMENT X: There were a few shows that preceded DOWNTON ABBEY that were trying to do something like UPSTAIRS, DOWNSTAIRS, which did not succeed. Then DOWNTON came along and became an enormous public and critical hit. Do you have any thoughts on why DOWNTON worked when other series with perhaps similar elements between it and UPSTAIRS, DOWNSTAIRS did not?

GARETH NEAME: I think we took the familiar, very recognizable genre and we’ve totally spun it in a very contemporary, fast-paced way. So we’ve rebooted that genre for the twenty-first century. I don’t think it’s too big of a claim to say that now. And that’s why it works. And therefore, because of the reboot and the pace of the storytelling, it brought swaths of millions and millions of people who watch it, who might not otherwise have been there for this one.

There’s that wonderful David Mamet line [from SPEED-THE-PLOW] that I use all the time, where the character in that play who’s a studio executive says, “My job is to find last year’s hit.” He’s very cynical and negative about what a lot of entertainment is. And I don’t think, looking for last year’s hit, does not usually deliver any hit.

ASSIGNMENT X: And do you have contingency plans should something unexpected happen to or with a cast member?

NEAME: Not especially, no, because you just can’t. You just have to manage. When we discovered that Dan Stevens wanted to leave the show, we had to just deal with that and change the story in a different direction.

NEAME: Yes. That’s essential, because it is an authored show it’s essential that he writes it.

AX: Can you say if you’re working on any other projects?

NEAME: We’re doing another [series of] HOLLOW CROWN and we just announced THE LAST KINGDOM for the BBC and BBC America. And a load of other shows. Obviously, we did the two PAGE EIGHT films as well [which aired on PBS in 2014].

AX: Do you have a favorite scene or episode from DOWNTON ABBEY in what we’ve seen so far?