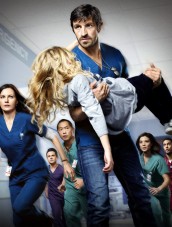 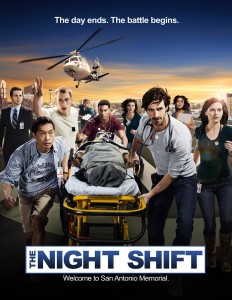 On NBC’s THE NIGHT SHIFT, now in its second season Mondays at 10 PM and renewed for a third, a San Antonio, Texas hospital has the only after-dark emergency room in the area. The staff includes a number of military veterans.

Executive producers Jeff Judah and Gabe Sachs, who worked on the feature DIARY OF A WIMPY KID and developed the 90210 reboot together, are the creators of THE NIGHT SHIFT. Here’s what they have to say about their series.

ASSIGNMENT X: At a hospital, what’s the difference between the night shift than the day shift?

JEFF JUDAH: First of all, the drinking. Nothing good happens at two in the morning [laughs]. You don’t want to be driving at two in the morning, right? At least, you’re over in the right-hand lane, so nobody comes over on you. But the other thing – everything breaks at night. It’s just this idea that, like the MRI, it just doesn’t work at night.

SACHS: In the daytime, everyone’s available. There’s someone to come fix it.

JUDAH: There’s no night pharmacist. There are no extra nurses. It’s a specific personality that chooses to work the night shift, so everything’s a little more different and the cases that come in are a little more wild. Anything that comes in after midnight is probably fueled by alcohol.

JUDAH: Not at this moment. And it is a San Antonio show, but it really is mainly financial. New Mexico gives a huge tax credit and that’s why we shoot there. You have to try to make it looking like San Antonio, even though environmentally it’s very different-looking.

AX: What have you learned about your characters going through Season 1 that affects them in Season 2?

JUDAH: I think you just see Jill [Flint, who plays Dr. Jordan Alexander] and Brendan [Fehr, who plays Dr. Drew Alister] have a great rapport, they have a real brother/sister relationship off-camera, so it was fun to play that on-camera. Freddie [Rodriguez, who plays Michael Ragosa] and Scott Wolf [who plays Dr. Scott Clemens], they’ve had a lifetime friendship, been forever in the business, so they’re really good friends. That shows up, so hooking them up. A lot of times, you’re just looking at combinations of actors and you write it one way, and then when you see who has better chemistry or who connects with somebody, you try to get them together more.

AX: Have you and Gabe Sachs been writing partners before this?

JUDAH: For about eighteen years.

AX: Is one of you better at one thing and one of you more enthusiastic about another thing?

JUDAH: He’s in Albuquerque, he’s on set all the time, so he’s producing on the set, and I’m back here running the writing room and doing the editing.

JUDAH: Night for night. When we’re outside, it’s night. But now, because of the winter, night starts at four o’clock, so the days are getting a little longer, but we just started shooting in early November, mid-November, so it’s pretty dark most of the day. That does help us a lot. It’s also very cold.

AX: You’ve said talking with an ER worker friend of yours inspired you to do the show. Is he a tech advisor on the show?

JUDAH: He was for the pilot, not now. We have actually two full-time tech advisors who actually are ER physicians, Zach Lutsky and Jon Fong.

AX: And is everything you come up with within the parameters and they just tweak it, or have you ever come up with something where they’ve gone, “No”?

JUDAH: Yeah, they have. And we’re like, “Okay, make it a yes.” It’s television. It’s like any show, I’m sure any show you’ve ever seen, it’s like, that’s not real. So you try to make it as real as possible, but it’s also television, you want to accelerate it – it’s what THE BLACKLIST does. We’re trying to do the movie [Robert] Altman’s M*A*S*H*, the place where you go to dark, and then they’re playing the football game, it seems sort of farcical, and then they’re just covered in blood. So to us, it’s really important to show the blood and how gory it is, because it always amazes me that these people who do this have to keep their jobs, and the original tech advisor on this is one of my best friends’ little brother. I’ve known T.C. since he was five. We named the character [Dr. TC Callahan, played by Eoin Macken] after him. I babysat him, I played ping-pong with him. So he’s this guy now in his forties, he’s just amazing, and he’s been telling these stories his whole life. He lives in Atlanta.

AX: On your first season, you had only six episodes. Season 2 is fourteen episodes. What does that increase in the number of episodes do for your storytelling?

JUDAH: It expands it. It’s like, six is a quick arc. Six or seven, you can start something in the pilot and finish it in six. If you start doing fourteen to twenty-two, it’s more like five-to-six-episode arcs. You sort of move along that way and move on, because otherwise you’re treading water in the middle, so people start losing interest.

AX: So essentially, do you feel like you’re doing two seasons back to back?

SACHS: We’ve discussed that. It is almost like doing two seasons.

JUDAH: We do six-to-eight-episode arcs, and near the end of that first arc, you start opening up the stories for the second. That way you can tell it with more intensity. I have total respect for HOMELAND and 24, where at the end of Act Two [within a single episode], it’s where some shows go in an entire season. You think, “Oh, they’re going to kill the President in the last episode,” and they kill him in the first act. You’re like, “Those guys have got b*lls” and they really push it, so it’s kind of an inspiration, too.

AX: What would you most like people to know about Season 2 of NIGHT SHIFT?

JUDAH: It’s a lot like Season 1. I think it’s a little bit better. I think it’s an adrenalized show that really tries to pay respect to the soldiers and the military, and it’s a working-class, blue-collar show, even though it takes place in a hospital.

SACHS: I’m agreeing. You’re going to see what it’s like to really work at this night shift in an ER.

This interview was conducted during NBC’s press day for the Television Critics Association at Pasadena’s Langham-Huntington Hotel.