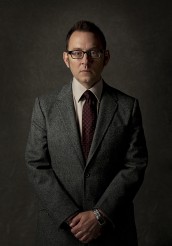 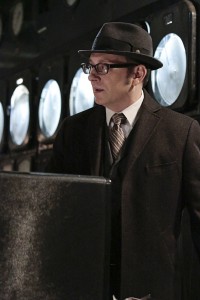 Created by Jonathan “Jonah” Nolan, PERSON OF INTEREST began life on CBS in 2011. Michael Emerson stars as the enigmatic Mr. Finch (we find out later his first name is Harold and he’s found of bird pseudonyms as a last name) who developed a machine that, as his opening narration explains, was designed to detect acts of terror. That part went to the government. However, Mr. Finch found that another part of the machine could detect threats against ordinary people and hired guilt-stricken former spy John Reese (Jim Caviezel) to prevent these threats from coming to fruition.

WGN is running the first four seasons of PERSON OF INTEREST from the beginning, back to back weeknights with the show’s CBS stable-mate ELEMENTARY, enabling fans of both series to catch up and/or revisit favorite episodes. PERSON’s fifth season will be back mid-year. In honor of the WGN bow, actor Emerson – an Emmy winner for his supporting work on LOST and his guest work on THE PRACTICE – makes himself available via telephone to talk about matters of INTEREST.

ASSIGNMENT X: Given all of the developments over the four seasons we’ve seen so far, is PERSON OF INTEREST still the show you thought you were making when you started it?

MICHAEL EMERSON: Well, no. It has evolved quite a bit. When we started, it was clear to me that I was doing a procedural for CBS, and they like standalone episodes, but it has grown into a little more long-form narrative, a little more philosophical with a considerably larger science-fiction component to it. I shouldn’t even say science-fiction, I should just say “speculative.”

AX: Were you concerned at the end of Season 4 about whether PERSON would be picked up for a fifth season, or did you feel like it had left off in a good place if it didn’t come back?

EMERSON: At the end of Season 4, I wasn’t even thinking that there would be any drama about the pickup. I just assumed that it was automatic. Then when it turned out not to be, that was what was surprising. I knew that the ratings were good, so I was sure that nobody would mess with a thing that was working. But there you have it.

AX: Season 4 ended with Finch, who was carrying the Machine in a laptop, Reese and Root walking into a hail of gunfire, their own weapons blazing. When we come back, are there going to be signs of that gunfight? Will Finch be limping more?

EMERSON: We tend to gloss sometimes the consequences of violence on the show just so that we can keep moving along. So we heal quickly and we get out of scrapes quickly. At the beginning of Season 5, we pick up a little lapse of time since that gun battle. Not much time – they’re still on the run, but Mr. Finch is uninjured. Reese and Root are.

AX: It’s been reported that Sarah Shahi as Shaw, who bowed out of the last half of Season 4 because she was pregnant with twins, will be back full-time in Season 5 …

EMERSON: Well, I haven’t seen her yet, but I understand she is coming. I think it’s still a ways off.

AX: So she’s not back immediately?

EMERSON: No, no. I think we’re going to see her for the second half of this season.

AX: For people just coming into PERSON OF INTEREST on WGN, is there a particular season or a particular episode you feel they should seek out?

EMERSON: I suppose the best policy would be to watch the pilot, which is the set-up. I think the pilot is sort of required viewing, so that you know where you stand. Then you can knock around a little after that, once you know the set-up and the voyage and the relationship. But having said that, there are so many important developments over the course of four seasons.

AX: Are there episodes that you think are particularly fun or gratifying?

EMERSON: Oh, yeah. I never know the titles of the episodes. Sometimes I know them by number. I have favorites – I like the one where Mr. Finch goes undercover as a schoolteacher. He’s there to save the life of a brilliant teenage hacker. It’s the one where [Finch] talks [the student] out of killing himself in front of a subway train. It’s a good episode. And I liked the baby episode.

AX: Do you like the episodes with your real-life wife Carrie Preston, who plays Finch’s one-time fiancée Grace?

EMERSON: I do. Those are sweet. There was an especially good one where the bad guys have captured Grace and I offer to trade myself for her freedom, and she’s blindfolded and we pass each other on a windy bridge. She doesn’t know the drama of the moment because she’s blindfolded, but I know it. We see more of her this season.

AX: And how do you feel Finch has evolved over time? Is he more of this, less of that?

EMERSON: He’s more fun than he started out to be. He’s a little warmer-hearted and he’s more uncertain about everything, about his own work, about his own calling, about the choices he’s made. And I think you could read [the story arc] as, he finds a family. It’s an odd family, him and Reese and Root and Shaw, but it is a kind of a family and they have relationships that have a degree of want and care and empathy. That’s been a nice development.

AX: There was an episode where Finch was pretending to be a crime lord and said something to the effect of, “You wouldn’t like me when I’m angry.”

EMERSON: Yes, when we were buying the surface-to-air missiles [laughs].

AX: Do you enjoy it when Finch gets to play that he’s evil?

EMERSON: Yeah. It’s fun. It’s fun when he goes undercover. Any of his covers have been interesting. He’s often mild-mannered, but in that case, it was kind of hilarious – it was so out of character for him.

AX: There was a very interesting Season 4 episode where Root wanted to kill a software developer played by Elizabeth Marvel because Finch was going to risk himself to protect the woman from Samaritan. Killing the woman was the only way Root could see to stop Finch from putting himself in danger, and Finch tried to kill himself in so that Root would no longer have a reason to kill the software developer.

EMERSON: That was a pretty cool episode.

AX: Did that you think change Finch’s opinion of Root at all, since she was putting him above even obeying the Machine, or did it just confirm his opinion of her?

EMERSON: It linked them more. I think he’ll always be a little ambivalent about her, although since then, there’s been a thaw between them, a little more camaraderie, a little more partnership.

AX: Do you think Finch now has fatherly feelings towards the Machine, since the Machine is now speaking to him and seems to think of him as “Father”?

EMERSON: Yeah. I think for such a long time, he resisted the idea of personhood for the Machine. He was very clear about it being a tool and not somebody. But now that’s getting blurred, or has been lately. And now that circumstances are so dire and the Machine showed a degree of reflection, of worry, of need, loneliness, a whole lot of things that Mr. Finch didn’t think he put in there. So now I think he’s maybe on the fence. He’s conflicted about it.

AX: Do the themes of the show ever cause you to have new concerns about the way things work in the real world?

EMERSON: Oh, yeah. I’m much more paranoid about electronics. I mean, the fact that we all have a tracking device in our pocket every day, that’s a big change in human culture. And someday, that device will be attached to or implanted in our bodies, and then what will we make of ourselves? Then to what extent will we be electronic? Also, this business of artificial intelligence – if you think very long about that, it will give you the shakes. Every time I read an article that says, “Oh, work being done at Google’s A.I. laboratory,” I’m, “Oh, here we go. Careful what we work on.”

AX: Do you have any other projects that you’re working on?

EMERSON: I try to keep some interest in the live stage, so I have some readings and workshops I’d like to pursue, and since it looks like I’ll have the winter off, there might be a chance for me to find my way onto the stage somewhere, somehow.

I’m doing an interesting reading in the first week of October. Moises Kaufman is doing an all-star gala benefit reading of his play GROSS INDECENCY, which is a play about the trials of Oscar Wilde. It was my break on the New York stage. So I haven’t even looked at that script in eighteen years. So it’ll be interesting to read it aloud in front of people.

AX: Do you think that’s going to have added impact, given all of the recent developments in LGBT rights?

EMERSON: Yeah, I think so. I think it falls somewhere in the political spectrum. The original reason for the reading was to raise money for a production of the play in Moscow, but then the Putin government shut it down, so now it’s raising money to support gay and lesbian causes in Russia. It’s become a little bit of a flashpoint in East/West cultural relations.

AX: Do you have more input into Finch’s character as the show evolves?

EMERSON: I don’t have, nor do I want kind of editorial [input] – I’m not one of those actors who has good ideas about what [the writers] ought to do with my character. I think what influence I have is by way of performance. In performance, I do things with it or spin it certain ways and then the writers notice it. Sometimes they get ideas how to take things further or make things I do integral to the character. It’s not done by way of a discussion, really, it’s just a loop of them writing and me performing, them seeing me perform and then writing more. It goes like that. So they get to know me really well – my habits, the way I spin things. They write for that – and away from it, to challenge me.