Home » I can Do that interview 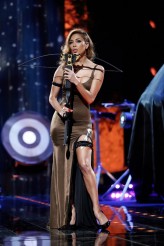 © 2015 Tyler Golden/NBC
Nicole Scherzinger stars in I CAN DO THAT! on NBC
Interviews

Nicole Scherzinger on I CAN DO THAT! – exclusive interview 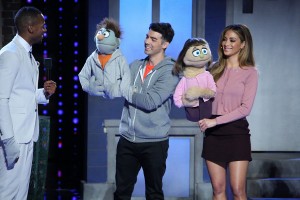 Nicole Scherzinger stars in I CAN DO THAT! on NBC | © 2015 Evans Vestal Ward/NBC

Nicole Scherzinger has been the lead singer of the Pussycat Dolls, a judge on THE X FACTOR and, with dancing partner Derek Hough, the winner of the tenth season of DANCING WITH THE STARS.

Now the multi-faceted Scherzinger, born in Honolulu and raised in Kentucky, is involved in another TV talent competition series. In NBC’s I CAN DO THAT!, Tuesdays at 10 PM, celebrities choose their challenge, choose a partner and then have to learn a new skill like tightrope walking or doing magic tricks.

At a press event held by NBC at the Langham-Huntington Hotel in Pasadena, California, Scherzinger’s legs are heavily bruised as a result of one of the challenges, but she doesn’t want to reveal what happened ahead of airtime.

AX: Did you do anything ahead of time to prepare for the show’s demands?

SCHERZINGER: This show is so intense that I am a regular member of Hatha Yoga, so I try to do Hatha yoga every day, to physically and mentally prepare myself for the show and whatever challenges I’m faced with.

AX: You have a somewhat different look for I CAN DO THAT! …

SCHERZINGER: It’s a new year. It’s a transformative year for me of growth and I just want to try something new. I grew up with really long, straight black hair, and I’ve had it all my life and when I was younger, I don’t know if it was like a security thing for me, [but] I never wanted anyone to touch it or cut it. And now I’m like, “Let’s cut it, let’s dye it, let’s do something new with it.” So, new beginnings.

AX: In the clips, it seems like the partnered pairs are one woman and one man. Is it always like that on the show?

SCHERZINGER: No. In fact, everyone has actually partnered up with each other at one point in time. There are enough shows in the season [to give everyone in the cast that opportunity].

SCHERZINGER: Honestly, probably it depends on what the challenge or the feat is, who you think would best fit you as a partner with that challenge. And also, most of the times, when we figure out that we’re doing something, when we choose it, when we’re picking a partner, every celebrity has to say why they want to do it or why they should do it or why they shouldn’t do it or why you should pick them. So they campaign, or not “campaign,” but off of what they say, you get a feeling, a vibe of energy – “I think you’d be great for this, I think you wouldn’t,” and that’s how you choose your partner.

AX: Is part of the appeal of doing a show like this that there aren’t any eliminations, that it’s okay to fail and you’re not going to get kicked off?

SCHERZINGER: No, it’s never okay to fail [laughs]. I’m a competitive person and I think the main thing is that you’re competing with yourself. A lot of the cast members know that I’m quite a perfectionist, and if I’m not giving it my all, a thousand percent, and if it’s not the best and I can’t extract the greatest greatness from it, then why am I doing it? Obviously, keep in mind that you’re having fun and it’s something new and you’re trying something new, but I always want everything that we do every week to be the best that it can be. If you’ve got an opportunity to do it, why not?

AX: To put it another way, are you happy that when you win for the week, you’re not causing somebody else to be kicked out of the party?

SCHERZINGER: Yeah. The great thing about the show is that you always have a partner every week, so you’re working with someone, you’re growing together and you can bounce off of them. And then all the acts are like apples and oranges. They’re so different, there’s so much variety in the show, so no one’s ever being kicked out of the party. We’re one big, happy family – one big, happy, friendly, competitive family [laughs].

Article Source: Assignment X
Article: Nicole Scherzinger on I CAN DO THAT! – exclusive interview

Tags: DWTS, Dancing With the Stars, I Can Do That!, NBC, Nicole Scherzinger, The X-Factor