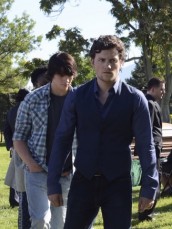 THE MESSENGERS: Joel Courtney on the supernatural side of high school – exclusive interview 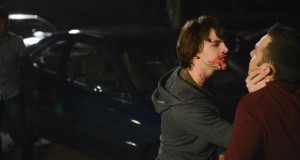 In The CW’s THE MESSENGERS, Fridays at 9 PM, five people who don’t know one another are first killed and then resurrected by a mysterious force. Each of the five then discovers that he or she now has a new power, and that this power is intended to help them protect the Earth from the rise of the Devil.

Joel Courtney plays Peter Moore, a high school student who learns the hard way that he has super-strength. When he’s attacked by a bully, Peter hits back – and accidentally kills the other boy. This puts Peter on the run with a load of guilt on his mind.

Courtney, born in California and raised in Idaho, recently played the famous youthful fugitive Tom Sawyer in the film TOM SAWYER AND HUCKLEBERRY FINN. He’s also been in THE BETWEEN and R.L. STINE’S THE WITCHING HOUR after making his feature debut in 2011’s period monster movie SUPER 8.

AX: You’ve done a lot of genre projects. Is horror/science fiction something that you’re particularly interested in, or is that just how it’s worked out professionally?

JOEL COURTNEY: It’s just worked out that way, but I’m always looking for a new thing to try out, a new genre. I don’t have anything specifically that I want to do, but I try to specifically change the genre from time to time to try something new.

AX: Did working on SUPER 8 help in any way with working on THE MESSENGERS, as far as reacting to something that’s going to be added later with CGI?

COURTNEY: You know what? I had to do that a lot in SUPER 8, and I got some of the tricks down, some of the aids – the brain helpers – to do that, so it definitely helps on this.

AX: Do you play Peter differently before and after he gets his power? Obviously, Peter punches the other kid out and he winds up dying, but apart from that accidental tragic result, would the earlier version of Peter have hit the guy?

COURTNEY: Peter definitely would have. There’s a tortured side to Peter. He’s a bullied teen who is just misunderstood by the bullies and at any point, anyone can snap. It’s just that, at that moment, he also got his strength, and it just went too far. Peter definitely would have hit the guy if he didn’t have his strength. It’s just that, with the strength on top of that, it went further than he could have ever expected or wanted.

AX: Is he dealing with the guilt of that throughout Season 1?

COURTNEY: He is. He took a life. That’s something that stays with you. I mean, it has to. Something as precious as life, when it is taken like that, whether it be an accident or not, it stays with you. It’s a part of you that’s just empty.

COURTNEY: I’m eighteen and Peter is sixteen or seventeen, so it’s close. Peter’s just a regular teen who’s got regular life problems that any teenager would have.

AX: Is there one other character that Peter bonds with particularly?

COURTNEY: I was thinking about this, and I have to say, if anybody, it would be Raul, played by JD Pardo, because [since Raul is] working with the government and the DEA, he’s on the move a lot, he can’t really settle and have any friends, which is kind of the same situation that Peter is in, but different circumstances.

AX: Is Peter at all looking for a mentor at that point, or is he very resistant?

COURTNEY: Being thrown into the situation of having to be with complete strangers, you’d have to be a little bit standoffish, because you honestly don’t know who these people are. He connects with them later and they become really good friends – they become a family, they’re a group. And they do help each other out. But at the beginning, it’s like, “I really don’t know who these people are, this is weird.”

AX: SUPER 8 was a period piece and TOM SAWYER is also a period piece, of a different period. Is it more fun to do period projects because you’re researching things, or is it easier to do contemporary?

COURTNEY: It is easier to do contemporary, but there are some things that are fun about doing a period piece. Like in the Eighties, just some of the tag lines that you’d say have changed throughout the decades. So you couldn’t just say, “Oh, cool, man.” It wouldn’t be “cool.” You’d probably say “rad.” There are details of a period piece that you can’t let slip through your acting.

AX: How hard was it to work with the TOM SAWYER period costumes?

COURTNEY: You know, it was really fun. They always had us in these baggy clothes, because they didn’t have good clothing back then. And at the end, after we find the treasure, Jake Austin [who plays Huck Finn] and I, we’re both wearing suits, and it’s much more formal, because we finally have the gold and we can finally afford nice suits. And they’re kind of constricting, and we just feel uncomfortable in them, because we’ve never worn them. Doing that movie was great.

AX: Do you get a lot of physical action in THE MESSENGERS? Did you do any training for that?

COURTNEY: Not specifically training. I did do a lot of physical things because of my ability. [As Peter], I’m super-strong at times. I can’t always control it and it isn’t always there when I need it, but at times, I do. I do physical things, because that’s my ability.

AX: Did you work with the stunt coordinator on how to throw a punch without clocking the stuntman?

COURTNEY: Yeah, we actually did that a lot for the scene in the pilot, where I get into the fistfight with the kid. We ran [rehearsed] that for twenty, thirty minutes. It was a lot of fun. I’d taken a punch – I’d never actually given one before that.

AX: Anything else that you’d like to say about THE MESSENGERS?

COURTNEY: I had a great time, I loved the cast, the crew was amazing, the whole team was phenomenal. I loved it.