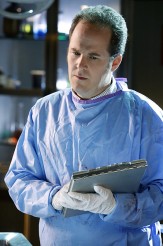 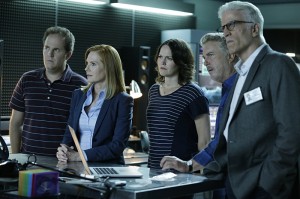 After fifteen seasons, three leading men, three spinoffs and more forensic clues than there are grains of sand on the world’s beaches (or turning up in near a body to point to a culprit), CBS’ procedural hit CSI: CRIME SCENE INVESTIGATION is wrapping up with a two-hour movie on Sunday, September 27. William Petersen is returning as original lab chief Gil Grissom to work side by side with the man currently in the job, Ted Danson’s D.B. Russell, who will be moving to CSI: CYBER when that series returns for its second season the following Sunday.

David Berman has played crime scene tech David Phillips for 290 of CSI’s 335 episodes. Behind the scenes, he and Jon Wellner, who portrays CSI’s DNA analyst Henry Andrews, run a company called Entertainment Research Consultants, which has provided CSI with many of its technical details over the years.

We caught up with Berman at the most recent party CBS threw for the Television Critics Association summer press tour; we also spoke with him on another occasion when he was in the company of CSI castmate Wallace Langham, who plays David Hodges, about CSI over the years and its finale.

ASSIGNMENT X: How are you feeling about the end of CSI?

DAVID BERMAN: Sad. I started on the show when I was twenty-four, it’s been sixteen years, I’ve been doing this most of my life, certainly the vast majority of my professional life, so it’s sad. I’m incredibly grateful and reflective. My best friends are on the show, and it’s given me not only a livelihood, but a real sense of identity, and I’m going to miss that.

We’re doing it [at the time of this interview]. I’m both enjoying the process and sad, which I think is only natural. But it’s nice that Billy Petersen came back for the finale and Marg Helgenberger and Paul Guilfoyle, so it’s nice to see some familiar faces. I think the fans are going to love it. I think it provides closure for a lot of the characters and I think Anthony Zuiker, who is the show’s creator, he came back, he wrote the script and I thought he did a really nice job.

AX: Are you going to be continuing to do research for CSI: CYBER?

BERMAN: I have no involvement on that show. [At] Entertainment Research Consultants, we do research for half a dozen different shows, but that is not one.

AX: What are some of the shows Entertainment Research Consultants has worked on?

BERMAN: We do research for CSI, BONES, we did RIZZOLI AND ISLES, CSI: MIAMI – we’ve done about sixteen shows over the last seven or so years.

AX: What are some of the things you’ve learned in the course of the work?

BERMAN: I’ve certainly learned a lot as an actor, a lot from watching Ted Danson and some of the other professionals on our show. The research, every day we learn an interesting little nugget. Science, law, police work, and then whatever we’re dealing with each week on CSI, we’re in a new world, whether it’s sharks or stamp-collecting or cliff-diving, whatever, we’re learning new things every week.

AX: Speaking of Ted Danson, most of his TV work had been in comedy prior to CSI. Were you happy/surprised/confused when he came on in 2011 as the head of the lab after Laurence Fishburne’s Dr. Raymond Langston left?

BERMAN: The first two. Happy and surprised, not confused.

WALLACE LANGHAM: I was confused that Laurence was leaving – that’s what confused me. But very happy and surprised that we got our good friend, handsome Ted Danson.

BERMAN: Yeah. He is just incredible.

LANGHAM: Fantastic. Yeah. Laurence Fishburne is one of the greatest actors in the world, and if he has to be replaced, [it was good that he was] to be replaced by a legend like Ted Danson. What I think it’s forced our writers and producers to do is to think in a brand-new way and invigorate the show with this amazing energy. It’s brought a lot of fun to the show. It’s been great. Not that having Laurence around wasn’t fun, but there was such a heaviness to what Laurence’s and Langston’s trials and tribulations were.

AX: Can you describe the difference in the vibe between the William Petersen years, the Laurence Fishburne years and the Ted Danson years?

BERMAN: It’s different in that people are different, and of course each leading man brings his own personality and his own unique set of talents to the show. But what’s been consistent is that all three of those guys who you mentioned are surely the most incredible guys – not just brilliant actors, but really nice people. So I think CSI has always been a very pleasant place to work, because they’ve always set a real tone of not just professionalism, but kindness.

AX: What are some scenes or arcs you’ve enjoyed over the past few years?

LANGHAM: Actually, our [Langham and Berman’s] first scene [with Danson] was the two of us and Ted and the octopus.

BERMAN: We were upstaged by the octopus. Wally, Ted and I performed an autopsy on an octopus.

LANGHAM: We called it an “octopsy.”

BERMAN: That was pretty great.

AX: Was it an actual octopus, or did they make one?

BERMAN: No [it was not a real octopus]. No octopuses were harmed during the filming of the production. Our fifteenth year on the air, we had a very exciting story, tracking a serial killer, and his evil brother, played by Mark-Paul Gosselaar of NYPD BLUE and SAVED BY THE BELL. It’s very exciting. Fifteen years in, which Jon and I figured out, we’re two years older than our bar mitzvah [laughs]. It sort of had its bar mitzvah a few years ago. It’s crazy.

AX: Do you have other projects going on we should know about?

BERMAN: I have lots of other projects [with Entertainment Research Consultants] and hopefully I’ll be landing on something soon [as an actor]. CSI, for as long as it’s been on, has been pretty consuming.

AX: And what would you most like people to know about your CSI experience?

BERMAN: That it was a once in a lifetime experience, that the actors that [viewers have] enjoyed watching, that they’re as nice as people as they are good actors. Fabulous place to work.