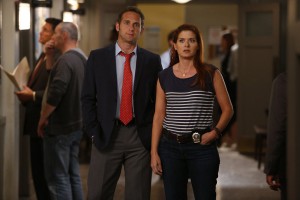 In NBC’s new series THE MYSTERIES OF LAURA, Wednesdays at 8 PM, Debra Messing stars as NYPD homicide detective Laura Diamond. Laura has her hands full – not only does she have an extraordinarily demanding job, but her estranged husband Jake (Josh Lucas) has just been put in charge of her squad room and they are raising young twin boys (Charles Reina and Vincent Reina) who give whole new meaning to bad behavior. Laura also must contend with an attractive new partner (Laz Alonso) and a disapproving, competitive colleague (Janina Gavankar).

As show runner Jeff Rake – one of LAURA’s executive producers, along with Greg Berlanti, McG and Aaron Kaplan – explains at NBC’s session for the Television Critics Association press tour, MYSTERIES is based on a foreign series. “The show is based on a really wonderful, charming Spanish format called THE MYSTERIES OF LAURA, and I suppose it’s a bit of a double entendre. On the one hand, Detective Laura Diamond and her colleagues will be solving closed-ended mysteries of the week, so that is the most literal interpretation of the [title’s] meaning, but at the same time, it is the mystery of this character. How in the world does she get it done at perhaps one the most perplexing times of her life? Recently divorced, thrown together with her ex in the workplace, and just the juggle of getting those kids fed, getting them off to school, dealing with how to get back out in the world as a single woman and pull yourself together and present yourself to the workplace, to the places that you go in your personal life, to figure out what the next chapter of your romantic life looks like, just kind of are relatable mysteries of how the working woman survives in the world and thrives. One of the reasons we think this is such a wonderful and heroic character is because she embraces the lemons that I’m describing and makes lemonade, and the fact that she thrives and succeeds, that is kind of the unveiling of the mystery of Laura as an individual.”

Rake and Kaplan worked on adapting the format for U.S. television, then brought it to Berlanti, who Rake had worked with on THE TOMORROW PEOPLE. The trio then took the project to McG, who signed on as another executive producer and directed the pilot. Rake, who was an attorney before he became a screenwriter, has also been a producer/writer on numerous other series, including BOSTON LEGAL, BONES and The CW’s BEAUTY AND THE BEAST.

When the Q&A session finishes, Rake remains for a little follow-up interrogation.

ASSIGNMENT X: Can you talk about what you’ve changed to set the series in New York? Are there things in the Spanish series that just don’t work when set in America?

JEFF RAKE: You know, the setting in the original doesn’t play in New York City. It has the feeling of a somewhat smaller city that allows for a frequency of mysteries that intersect directly with the characters’ lives. Every so often, in that show, you’ll see a murder victim or a murder suspect who comes out of the personal lives of our officers. We’re trying to do that less frequently just to acknowledge the fact that in New York City, a city of so many million people, it’s a little bit less likely that you’re going to [have main characters] connect to the stories directly, but that’s why we’ll always be taking extra pains to find those thematic connections. In the second episode, the murder victim is a woman who is newly divorced and trying to get back out there and start her romantic life over, and has a terrible tragedy happen in a hotel room when she was just out on a dating site trying to meet a nice guy. And that’s going to be something that Laura can relate to, because five minutes from now, Laura sees herself out there in the dating world, trying to get started again. And it’s those kinds of connections that will resonate, I think, for her and for the audience. So that’s a fundamental difference, I would say.

AX: How realistic is that concern for Laura, given that her estranged husband still doesn’t want a divorce and is in daily contact with her?

RAKE: Well, I think that one of the fundamental dilemmas of her life is whether or not she should take this guy back. There’s a lot to like about this guy. He is very winning, he is very warm, he’s a great father and look at Josh Lucas – my goodness. But at the same time, this guy was guilty of some bad acts, we will be reminded of them, and so that is a question I think that a lot of separated or divorced spouses, men and women alike, out there in the world, face when you’re getting to that point in your life where you don’t want to be running around finding who your soul mate is. Do you forgive the grievous mistakes of your spouse and give them a second chance, or do you say, “Who else is out there?” And I think that’s something that keeps you up at night.

AX: Might Laura notice her new partner, played by Laz Alonso, as a possibility at any point?

RAKE: At any point? Absolutely. I think we want that to be a slow burn. That romantic triangle is something that I think is quite real, but we don’t want to overplay that too early, because we think that there’s wonderful chemistry between the three of them there, and we want to take our time with it.

AX: You also have Janina Gavankar playing Meredith, the resident antagonist at the squad room …

RAKE: Hopefully it will be a little bit more layered than that. We’re going to discuss that Meredith is much more than the few minutes we saw in the pilot episode. But yes, there will be a healthy friction between Janina’s character and Debra’s character, but they’ll also come to discover that they are allies in many ways.

AX: Is the Meredith character a part of the Spanish series?

RAKE: Yes, absolutely. The wonderful Spanish series had basically all of the bones that you have seen in our pilot. The five series regulars – we also have a wonderful guy, Max Jenkins, who plays the office assistant, hilarious. And these same five were part of the original. And the same dynamic.

AX: Laura’s little boys are real handfuls. Might the kids go into therapy at any point?

RAKE: [laughs] When we sit in the writers’ room, we talk about the reality of what it means for you, for your spouse, for your kid, when you’re going through separation, divorce. That’s certainly on the table, and so that’s absolutely a possibility. We don’t want to make light of it – even though we’re telling a story that has a lot of comedic elements to it, we want it to feel authentic and real, and that’s something that happens in real life. I would not be surprised if we go there.

AX: What kinds of mysteries does Laura investigate?

RAKE: In terms of the actual mysteries we’ll be solving each week, in the writers’ room, we start with original concepts, but also have the benefit of this wonderful Spanish series. They are, in essence, our collaborators, and we have the luxury of being able to look at that underlying material as well. We start talking thematically and we start talking about mysteries that have underlying themes that connect to things that we want to speak to.

In terms of the pilot, for example, the underlying mystery touches on themes of infidelity and of the extreme measures one will go to for love and love lost, and that allowed us to create a thematic tie between what was happening in Laura’s tumultuous personal life simultaneous with the case that she was solving, and that’s our goal. Every week, we would like to have the personal side speak to the cases and vice-versa. I think it will make for richer storytelling.

AX: Your fellow executive producers Greg Berlanti and McG and Aaron Kaplan – are they all involved on a day to day basis or are they more, “Let’s get this up and running and there you go”?

RAKE: You know, the answer is both. I mean, we all have a great shorthand with each other. I’ve worked with Aaron before, I’ve worked with Greg before, and McG and I fell in love and have become blood brothers on the pilot, and we are in email and phone contact, all four of us, on a daily basis. Am I the most hands-on? Certainly, because I’m in the writers’ room and I’m back and forth between New York and L.A. with production, but they’re all keeping a close eye, they’re looking at every outline, every script and every cut, so we’re very close allies.

AX: And is there anything else you’d like to say about THE MYSTERIES OF LAURA that nobody asked on the panel?

RAKE: You touched on the fact that there are going to be some interesting romantic triangles. I think that the romantic triangle between Debra’s and Josh’s characters and Laz Alonso’s character is something that’s going to rear its head. There’s also going to be an interesting triangle between Janina Gavankar’s character and Josh and Debra, because they’re all available, they all respect and admire each other so much, and when you’re in close quarters, working day and night and dealing with life and death circumstances, things happen. So expect things to happen.