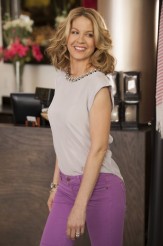 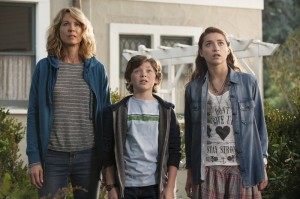 NBC’s new half-hour comedy, GROWING UP FISHER, Tuesdays at 9:30 PM, is based on the real-life experiences of series creator DJ Nash. Nash’s parents had an amicable divorce, at which time his lawyer father living on his own for the first time, decided it was time to be open about something previously only his wife and kids had known – he’s blind.

Despite being relatively young (the age difference between Mel and Joyce is referenced on FISHER), Elfman is a veteran TV comedy actress, having starred in five seasons of DHARMA AND GREG. Since then, the California native has headlined a number of other comedies, most recently as the U.S. First Lady in NBC’s 1600 PENN, as well as spending a season on the hour-long drama DAMAGES.

After NBC’s GROWING UP FISHER Q&A session for the Television Critics Association, Fisher remains available for some follow-up discussion.

ASSIGNMENT X: With Mel going out into the world on his own for the first time, does Joyce have any guilt about the break-up? And since Joyce married young, is she afraid of being on her own or is she looking forward to it?

JENNA ELFMAN: The divorce was mutual, number one. She wants to be able to actually shine, because she was very young – she was someone’s daughter and then someone’s wife, she got pregnant on the second date, and then someone’s mother, and then, not just someone’s wife, but a wife to this man who is very, very, very dominant in his character, extremely, and blind and charming, but dominant. She couldn’t ever grow. So now she’s becoming a mother; you sacrifice a lot. So becoming a mother and married to this man, she kind of felt like she had become a zero. She was always serving and serving. So now she’s on her quest – she never got to go on that journey of adulthood – “Who am I? And what are my viewpoints? And what are my opinions? And who am I in this world?” And so I think this is her turn to do that.

What I love about her so much is – DJ always said he couldn’t believe what his mom just said, things that would come out of her mouth. And I think the fun for me is there’s a decreased perception she has. She kind of sees life out of a bit of a keyhole, and I think her journey is to expand that, but it hasn’t yet. So things go by her. Certain obvious [important things] just totally are not on her radar. So it makes her quirky, which I really liked. But what I love is, there’s that, but then she’s a great mom. And I love that she has these two things happening at the same time within her – someone who is completely missing the boat on certain things, but genuinely and devotedly loves her children. It just makes for a really interesting character, who is a bit of a fish out of water in a way, because she is just now starting her life and is completely missing the social cues that are constantly being given to her by her daughter and her family.

AX: You started out as playing free-spirited ingénues. How is it playing the mom of a teenager?

ELFMAN: 1600 PENN helped me transition. Now [in real life] I’m starting my forties. It’s a new era of casting for me and how to go into that gracefully. You don’t really have a choice. You are the age you are. There’s nothing you can do about that. I actually like it. It took me about a year to calibrate to the fact that okay, now we’re in a new territory, and I’m entering my forties, so okay. But as a woman, you have to pull yourself up by the bootstraps and go, “Okay.” Especially when you’re on television, you’re looking at yourself and you see the changes, and I’m kind of digging it. I’m like, “Wow, I’ve changed. I like it. Okay. This is happening.” And I’m just like, “I don’t want to fight it, I want to embrace it.” It’s not always easy, and you just have to embrace it. And I think that’s – you can’t go backwards. You just have to find the glory and the awesomeness in it.

AX: So no drastic measures?

ELFMAN: I don’t really want my face cut open, [with plastic surgery] I don’t really have any interest in doing that. I just try to exercise and take vitamins and drink plenty of water.

AX: Is the show going to deal with the age difference between you and J.K. Simmons as Mel? Going by the age you appear to be and the age of your onscreen daughter, it looks like Joyce was very young indeed when they got married.

ELFMAN: Well, we address it in a couple of scenes. Like on the second date, I got pregnant with [Katie] and I try to tell her, “In case you haven’t done the math, I was very young when I had you.” Because [Katie] is thinking, “Can’t you just be my mother?” and I’m trying to justify my behavior.

ELFMAN: I actually feel honored that I have this life experience to bring, because being a parent is a really specific point of view, and if you have not been a parent, you don’t know it, and you only know it once you see that kid come out of you. It’s a really specific thing. And it’s not the same as having a niece or a nephew, it’s not the same as having an animal. It is its own cup of tea and I’m really actually happy that I have that point of reference to bring to the screen, and I feel like I just love it. I love that I have that in my life and I can bring that. I love [onscreen son] Eli so much. I think he’s very special. He moves me. Like I tear up sometimes looking at him, because I think he’s really special. I love giving him that love as a mother.

AX: How do you balance your work life with your real family life?

ELFMAN: Time management. I read an article, an interview with Madonna, years ago, before I was ever a mother. And they asked her the same question, and she said, “It’s all about time management.” And that really stuck in my head, and she’s absolutely right. You have to carve out – I mean, my days are often scheduled down to the fifteen-minute window. That’s how you get it all done so that you can be doing what you’re doing while you’re doing it, and not be a dispersed, overwhelmed person. But it does take a lot of time management.

AX: Is there anything we should know about GROWING UP FISHER?

ELFMAN: I think it’s just what I love about it – it’s touching, it’s warm, it’s funny and you don’t feel sad for any of them; you really get that they’re still a family. And you never feel sorry for [Mel] as a blind guy, ever. He’s such a competent guy. I just think it’s very relatable and it’s funny and it’s heartwarming. In a world of cynicism, it truly is heartwarming and funny, and there’s nothing else like it on television. There’s nothing about the show that feels derivative or concocted. It’s based on a true story and I think people will enjoy it and I hope they do.