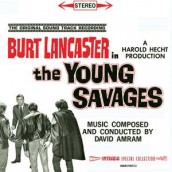 Taking his place among such be bopin’ jazz artists as Miles Davis (ELEVATOR TO THE GALLOWS) who were recruited to the far more defined style of film scoring, David Amram made a powerful feature debut in 1961s THE YOUNG SAVAGES, for which director John Frankenheimer took the BLACKBOARD JUNGLE aesthetic to even rawer territory as caring cop Burt Lancaster finds there’s more than meets than eye in a group of racist white toughs killing of a blind Puerto Rican kid. Sure jazz has always been the sound of juvenile delinquency since the late 40s, but leave it to a true hepcat like Amram to bring real danger to jazz as film music – namely an untamed sound that carried a sense of urban danger where upstanding folks feared to tread. Not that THE YOUNG SAVAGES doesn’t pack numerous, extended cool noir jazz tunes that draw on his work with such masters as Thelonius Monk, Dizzy Gillespie and Charles Mingus, filling out the gentler first “side” of this album.

It’s in the true underscore tunes that Amram shows the kind of ballsy dissonance that inflected the work of his fellow NYC progressive-gone-Hollywood Leonard Rosenman (REBEL WITHOUT A CAUSE). Except, Amram is even way more out there, no doubt inspired by his personal time in NYC’s hells kitchens. Pounding cues like “Switchblades On Parade,” “The Last Taco” and “Help!” march and pounce with shrilly colliding strings and brass, howling with instrument-pummeling outage befitting a monster attack – except in this case it’s deceptively young human animals. Far more lyrical tragedy can be heard in his main theme as it woefully sings of ghetto blight. Even melody rises in the lonely harmonica of “Subway Sounds” or the a tender flute in “Later With the Elevator.” But the violence that suffuses Amram’s daring music is always sure to appear for a terrifying beat-down of the harmony at hand. One of the scores that truly captured the urban jungle, Amram’s THE YOUNG SAVAGES marked the start of a studio run that would include such other classics of distraught psychology as THE MANCHURIAN CANDIDATE and SPLENDOR IN THE GRASS. Amram’s alternately disturbing, and cool cat album sounds just great on this Intrada release that marks this terrific, uncompromising score’s debut on CD for an album of savage beauty that impresses more than ever when it comes to the start of a composer’s career that hasn’t stopped since.

Click on the link to Purchase the THE YOUNG SAVAGES soundtrack