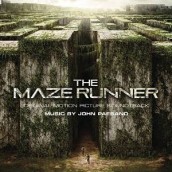 Starting off his career as an assistant to Jerry Goldsmith on STAR TREK NEMESIS and THE SUM OF ALL FEARS, John Paesano has certainly been busy with DC animation, DV action and friendly children’s stuff with such work as SUPERMAN BATMAN APOCALYPSE, S.W.A.T. FIREFIGHT and ANOTHER CINDERELLA STORY. But given the chance to crush kids on a major Hollywood playing field, Paesano blazingly takes off with THE MAZE RUNNER to land in a zone of body-crushing walls and prowling creatures – attacking the opportunity with terrific excitement and character-oriented melody to boot.

Where the YA sci-fi genre has given a similar breakout opportunity to Junkie XL with DIVERGENT (and given fresh vibrancy to older dudes like Marco Beltrami with THE GIVER and James Newton Howard on THE HUNGER GAMES) Paesano is welcomely determined to use his own voice for an oft-trod book-to-hopeful blockbuster arena. The big difference here is that it’s a playing field where kids are fending off external menaces as opposed to each other, which opens up the opportunity for melodic warmth as well as furious action, his score given further distinction by using exotic, ethnic percussion and wind instruments to distinguish a surreal zone of death and deliverance that could just as well be taking place in Jurassic Park. Paesano suspensefully keeps this sense of mystery going in a way that thematically pumps the heroically adrenalin, its walls built from equal parts tenderness, racing terror and restrained electronic percussion of the tech that makes the maze work. A chorus helps to convey just how immovable, and suddenly crushing this awe-inspiring maze is, yet one where hope somehow survives, While its teen characters might not know where the hell they are, Paesano’s alternately rampaging, and emo scoring proves an impressive map that will no doubt have producers, and sudden fans beating a path to his keyboard.

Click on the link to Purchase THE MAZE RUNNER soundtrack