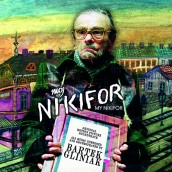 Bartek Gliniak paints an eccentric sound for a Polish artist

If you enjoyed the eccentric cimbalom approach of THE GRAND BUDAPEST HOTEL  then you’ll likely want to take a musical room in the addled, artistic mind of this Polish painter. For the stay proves a real, whimsical delight, as heard through composing concierge Bartek Gliniak. Having gotten recognition in his native Poland, this talented musical artist now gets some international soundtrack exposure with the release of his work for this award-winning 2004 film.

Embodying a disabled, yet visionary painter who could barely communicate, Gliniak comes up with a memorable, waltzing theme that’s expresses itself through both wry humor and emotion in a quirkily subtle way that Wes Anderson would no doubt appreciate, not only getting across a witty Eastern European atmosphere but also the quirky personality of an “outsider” artist. With a circus-like sound that echoes both Nino Rota and the intrigue of THE THIRD MAN composer Anton Karas, Gliniak has both sympathetic fun with the grizzled old man (played onscreen by a woman no less), while also realizing a sense of heartfelt poignancy beyond the seeming craziness. It’s the kind of hat trick that made BUDAPEST so memorable as a score and film, and pays off here nicely as a droll, charming listen that plays both a classical old country and a visionary in his own whimsically misunderstood world of color. For Gliniak, MY NIKIFOR couldn’t be more colorful signpost to Hollywood at signaling his talent.

Click on the link to Purchase the MY NIKIFOR soundtrack