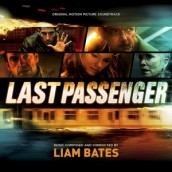 Liam Bates dynamically wants us to know that he’s moving up from conductor to solely taking over the driver’s seat for this Brit train-to-hell thriller, which has a few passengers doing their damnedest to stop a madman from taking their once-normal ride to a flaming last stop. And right along with Bates on the pedal are the gleeful ghosts of Michael Kamen and Jerry Goldsmith, with the smashing, brassy action touch and John Williams-esque swirling strings pressed right to the floor (along with that composer’s electric piano way with emotion).

While it’s soon apparent that Bates doesn’t quite have their way of putting melodic fuel into this 80s-centric type of action-suspense, that doesn’t stop him from having energy to make the listener take notice that there’s genuine talent here – especially in how he uses high-impact rhythm and gnarly metallic samples to musically embody the train and its maniac at the wheel, often times with the chug-a-chug rhythm of a steel white shark given roid rage. Uneasily balanced between rough shod sampled orchestra and the real impressive deal, LAST PASSENGER is an often exciting, all-over-the-place score for a musician to watch, especially when he finds his own voice totally in control of his next action vehicle. I’ll be eagerly awaiting at that stop.

Click on the link to Purchase the LAST PASSENGER soundtrack