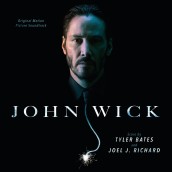 Any Russian mobster who watched THE MATRIX would know better than to mess with Keanu Reeves. Fortunately as THE EQUALIZER reboot recently proved, these enduring villains du jour don’t seem to watch a whole bunch of familiar former hit-man movies. And their latest f-up of killing a bad ass’ puppy gives DEVILS REJECTS Tyler Bates, BEYOND THE MAT‘s Joel J. Richard and an assist by Dyland Eiland (i.e. the DJ known as Castle Vania) carte blanche to get some rocking payback. Starting off with some slow-burn ambience to get across “John Wicks” retired killer street cred, Bates, Richard and Eiland gleefully unleash electro-punishment upon the post-Commie malefactors. Reeves is an actor who brings particular grace to his annihilation, and the composers skillfully get that rhythm down with sleekly menacing strings, trip-hop beats, retro synths and grinding guitar, even allowing a cool theme to be derived amidst the mayhem.

Better yet, there’s a mean, cimbalom-esque ethnicity to the score that gets across the bad guys as it repeatedly gets shocked, shot and stabbed by JOHN WICK‘s rave-ready dance moves. With neon propulsive songs by Ciscandra Nostaghia, M86 & Susie Q and even a jazzy “Evil Man Blues” number performed by The Candy Shop, this is one of those soundtracks that could just as easily be spun in a club as a movie soundtrack, which is right in hyper-beat step for style-conscious killer who moves with cool, yet enraged rhythmic elegance as he takes out the trash – given extra magnetism by musicians who definitely know their way around a dance floor where pulse (and the upcoming lack of many humans’) is the thing. In any case, JOHN WICK is most definitely not for the mild score of heart, which for a glowstick-holding music fan is a cool thing indeed here.

Click on the link to Purchase the JOHN WICK soundtrack