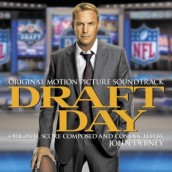 As the second “sports” movie after MONEYBALL to deal with the behind-the-scenes wheeling and dealing that makes for a league roster, DRAFT DAY takes on the far more physical world of football with a decidedly less musically cerebral approach. But that doesn’t mean that John Debney is all rhythmic brawn and no brain as he helps make heated phone conversations, chalkboard stats and Machiavellian negotiations into electrifying listening. Re-teaming with Ivan Reitman after helping the director move up a more youth-oriented yard line with the relationship dramedy NO STRINGS ATTACHED, Debney deftly plays between alt, pop rhythm and orchestral emotion in creating a hip score for a movie about a smart, if sometimes underhanded executive player, making DRAFT DAY a nice hand-off from his powerful score to the flawed JOBS. Debney is constantly on the move here with a rhythmically intensive approach that makes one think the world’s at stake in crafting the NFL roster, music that gives the football-heavy jargon exciting impact, even if it might fly over the head of non-sports fans who are just out to see a Kevin Costner flick.

On that count, Debney grounds his score with a string-driven sense of nobility that befits the actor’s Americana appeal, creating a melodic sense of humanity that’s at stake with the crushed, or inflated egos of management and the athletic talent they bait and switch with. Sure this might be a dialogue-driven movie with barely any on-the-field action in it. But darned if Debney’s propulsive, ever-intensifying score doesn’t make you think that you’re listening to the music for the be-all end-all game, right down to the big pitch, sustained anticipation, and winning play of a soaring orchestra –here passed to the tune of millions of dollars. Yet in the end, it’s Americana nobility that this score is really about, its rhythmic moves made on the football green as opposed to the spreadsheet.

Click on the link to Purchase the DRAFT DAY soundtrack