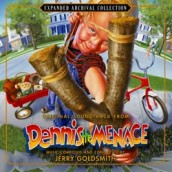 While he was a maestro of nearly every musical style, the one genre that Jerry Goldsmith never quite seemed to master was straight-up, non-genre comedy, particularly in such oddball scores as THE LONELY GUY, FIERCE CREATURES and MR. BASEBALL. Maybe it was because the melodies got all sentimental when confronted with straight-up romance, as opposed to playing the hijinks of gremlins and psycho neighbors.

While he might not have horns, the devilish mischief of 1993s DENNIS THE MENACE does much to rectify the Goldsmith comedy curse, especially since the romance here is giving a yucky kiss to Margaret Wade. DENNIS  impresses by tapping into the satirical heartland flavor that filled the likes of Goldsmith’s GREMLINS, a bucolic sound full of bird-tweeting flutes, gently gamboling strings and tender pianos. It’s a pleasantly melodic, theme-filled backdrop to the musical pratfalls at hand, as Goldsmith uses tip-toeing brass, imposing “Peter and the Wolf” Prokofiev-isms and smart-aleck electronic percussion to set up one military-minded HOME ALONE-esque prank after the other.

While he might not be as antic as Carl Stalling in playing smashed heads from set-up to painful payoff, there’s a wonderful, catchy energy that sweetly plays a larger-than-life outrage for a little kid. Special note can be given to the marvelous harmonica playing of the legendary Tommy Morgan. A Goldsmith regular from LILIES OF THE FIELD to STAGECOACH and MAGIC (not to mention riffing for other composers on the likes of HIGH PLAINS DRIFTER, WESTWORLD and ROSEWOOD) Morgan’s work on DENNIS plays Hank Ketchum’s comic strip character with all the verve of Huckleberry Finn. One could only imagine this as the soundtrack to the Mark Twain adaptation that could have been.

Click on the link to Purchase the DENNIS THE MENACE soundtrack