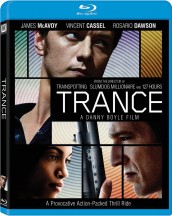 TRANCE Highlights this week in Blu-ray and DVD Releases

Also reviewed: DETENTION OF THE DEAD and ROBOTECH: 2 MOVIE COLLECTION 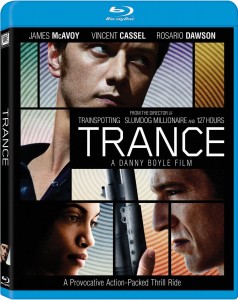 TRANCE – An auctioneer at a high profile auction house has a dangerous secret. Not only is he planning the heist of this life with some high-priced thugs to steal a piece of art valued at $25 million but his past keeps catching up with him after the deal goes bad and he takes a blow to his head by one of his accomplices. Turns out, the well-mannered but devious auctioneer, played by James McAvovy, has a history of violence against a woman that he became obsessed with. When he can’t remember where he stashed the art after the heist, he seeks out the help of a psychiatrist that specializing in hypnosis. Of course, it is the same woman he was stalking and abusing but he doesn’t remember because of the bump on his head.

It turns into an interesting game of cat and mouse as the art robbers want their cut, the auctioneer slowly begins to recover his memory and the psychiatrist (Rosario Dawson) has a plan up her sleeve to take it all. With a slow week of titles, this might be the best bet given there is not a lot to choose from and this is pretty decent in terms of pacing and delivery. But it is best as a rental and seen in high def either through Blu-ray or digital download. 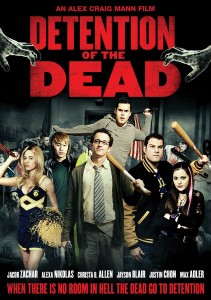 DETENTION OF THE DEAD – Zombie films are a dime a dozen these days and zombie comedies are just as common as the straight horror variety. Luckily, DETENTION OF THE DEAD isn’t too bad because it packs enough of the silly with some decent gore making it an odd combination of horror and slapstick. The plot is pretty much told in the title, a group of high school kids are in detention when all hell breaks loose and slackers, jocks, popular kids, goths and nerds must unite in order to survive. Of course, not all of them make it out of the block and they fight through different areas of the school before holding up in the one place no student would willingly go – the library. There are some decent puns about the state of education here and the storyline while simple works. Just don’t expect another SHAUN OF THE DEAD or something similar from this. Also good to see Jacob Zachar from GREEK getting some work. 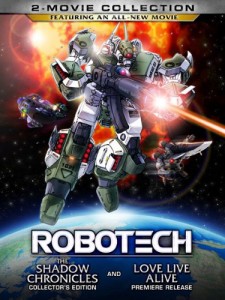 ROBOTECH: 2-MOVE COLLECTION – This collects two movies from the classic animated series including a new one called LOVE LIVE ALIVE and more popular SHADOW CHRONICLES. While it is worthwhile to have in your collection the SHADOW CHRONICLES as it is one of the best movies from the series, LOVE LIVE ALIVE is a clip show from the New Generation series and adds nothing new to what has already been established. The other problem is that LOVE LIVE ALIVE is being offered in full screen format – because it is from a TV show – while SHADOW is widescreen. So, if you haven’t seen New Generation and want to own SHADOW this is a good set to have otherwise keep what you already have and save the money.