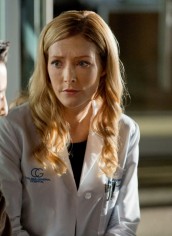 The actress talks about playing a doctor 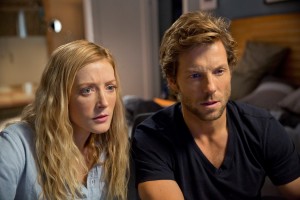 In MONDAY MORNINGS, which originally aired on TNT and was released on DVD May 28, doctors gather every week during the title time to discuss the hospital’s previous seven days’ worth of mortalities and worsening illnesses. In the series, created by David E. Kelley, based on a novel by Dr. Sanjay Gupta and executive-produced by both men, Jennifer Finnigan plays one of the surgeons, Dr. Tina Ridgeway, who is very close with fellow surgeon Dr. Tyler Wilson, portrayed by Jamie Bamber.

Montreal-born Finnigan has been a series regular before, including a four-year run as Bridget Forrester on THE BOLD AND THE BEAUTIFUL, STUDENT BODIES and COMMITTED, among other credits. At a press event for the Television Critics Association, Finnigan talks about playing a medical professional.

FINNIGAN: [Between the two series] I did a sitcom called BETTER WITH YOU, [with] Joanna Garcia, Kurt Fuller, Debra Jo Rupp, so I went from heavy legal to three-camera sitcom to heavy medical.

AX: Your jargon-free stint aside, have you found legal or medical dialogue more difficult?

AX: Playing a surgeon, are you finding yourself much more conscious of how you use your hands?

FINNIGAN: Yes, absolutely. When we’re doing surgery, we have to do it with so much credibility, and it’s a choreographed dance, basically, so I’m constantly asking our medical advisor, “Where would I place my hand here? How relaxed is my hand? How would my fingers go here? How do I do this stitching and look credible?” It’s all about doing it with authority. Otherwise, the audience won’t buy it. I now believe, as I did when I was doing CLOSE TO HOME and I reached a point where I was offering legal advice, I’m almost to where I feel qualified offering medical advice [laughs].

AX: You said Dr. Gupta showed you how to tie off an aneurysm. Did he use string, did he use the air …?

FINNIGAN: It was on a cow brain. And it gets a little bit gory.

AX: And a little smelly?

FINNIGAN: No, thankfully, they keep it on ice, it stays pretty fresh and by the end of the day, it just looks real sloppy [laughs].

AX: If you had to go to a hospital as a patient now, does MONDAY MORNINGS make you feel more or less confident about the kind of care you’d get there?

FINNIGAN: I see what you mean. A mix. I think I’m getting to where I know so much with the ins and outs and the politics and the legalities that I never knew about, but yeah, it would make me hesitant to a certain extent. But on the flip side, I love being so educated and prior to this, I was very afraid of hospitals. And now I walk in with a certain amount of knowledge and relaxation, because I know what I’m getting into.

AX: And it looks like your character and Jamie Bamber’s character have …

FINNIGAN: An interesting relationship? Yes. There is a very subtle relationship there. What I love about it most is that it’s undefined. David E. Kelley is not interested in doing a soap opera medical drama. He and Sanjay want to focus on the medical aspect more than anything, but of course, there are going to be glimpses into their personal lives and I think that audiences kind of clamor for that, because they want to know what’s going on. But yeah, the two doctors have a very close friendship.