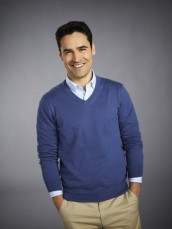 The actor digs into the AVENGERS short ITEM 47 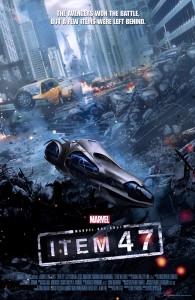 In NBC’s GUYS WITH KIDS, Jesse Bradford plays Chris, the one single father among the title characters parenting infant; his pals and fellow dads are played by Anthony Anderson and Zach Cregger.

Connecticut native Bradford has been appearing in front of cameras since he was in a Q-tip commercial before the age of one. When he was fourteen years old, he starred in the feature KING OF THE HILL for director Steven Soderbergh; he was also the hero of CLOCKSTOPPERS and SWIMFAN, among other theatrical credits, and had an arc on THE WEST WING. His previous gig as a TV regular was on the short-lived legal drama OUTLAW, playing law clerk to Jimmy Smits’ Supreme Court Justice-turned-defense attorney. He can also currently be seen in ITEM 47, a special narrative feature that accompanies the home video release of THE AVENGERS.

Bradford is happy to discuss all of the above at a poolside event for talent and the press at the Beverly Hilton Hotel, sponsored by NBC.

ASSIGNMENT X: Were you looking to do a half-hour show at this time?

JESSE BRADFORD: I was looking to do something that I thought was good. It happened to end up being a half-hour show this year. People ask me, “What kind of thing are you looking for?” and I always say, “Something good.” It doesn’t have to be dramatic, it doesn’t have to be comedy, but I was drawn to the idea of doing a half-hour sitcom in particular, because, one, For me personally, in my trajectory as an actor, I think people, if they know who I am, think of independent films and drama. This is kind of the exact opposite of that. It’s the broadest-appeal comedy sort of stage-performance-style thing. And I love the idea of throwing a curveball like that and going, “No, I can do a lot of different kinds of acting.”

I love the idea of being on TV right now. I love doing movies, I adore doing movies, but I’ve watched the industry change and shrink and metamorphose as things do, and I started to feel like I was putting a lot of energy and a lot of effort and a lot of creative work that nobody was getting the opportunity to see, because the filter has closed down so much on what’s actually going to get released [in terms of feature films]. And you can hedge your bets all day long and do these independent films, but if they don’t make it out there, nobody gets to see it, so that’s why I kind of geared towards TV. I’m glad I’m here. 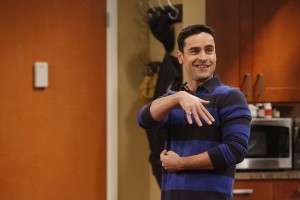 AX: Was NBC looking to work with you again after OUTLAW?

BRADFORD: I hope so. I mean, I had to go in and go through a relatively standard process to get this job, so it wasn’t based on a phone call, but I like to think that they like me, I hope [laughs].

AX: In GUYS WITH KIDS, how is it playing so intensely off two other actors versus being part of a differently balanced ensemble?

BRADFORD: I find it really fun. Anthony and Zach are really funny. I’m here to be in many respects the straight man, and if anything, I would say I’m thankful for them, because I think they’re going to end up doing more of the comedic heavy lifting, while I’m just kind of reacting to the mayhem and hopefully coloring it – I’m a little more like the audience window, maybe.

AX: A lot of shows now use prosthetic babies instead of actual infants. Does GUYS WITH KIDS use prop babies at all?

BRADFORD: Just while we’re rehearsing, while we’re doing the broad strokes rehearsal process. And then inevitably, we rehearse with the babies as well, and it’s funny how the whole thing turns – it just changes as soon as you have these live bundles of joy strapped to you. Any choices you were making when you had a piece of plastic strapped to you are augmented all of a sudden, because you have to take this extra care. And it just sets you into this other mindset where some vast percentage of your performance energy – I’m speaking for myself – is going to just the care and protection of this little human that’s strapped to you, and I think that’s adding an interesting element to the performance, because that’s really how you are in that scenario. And that’s really how a young dad would feel. Whatever else they’re doing, they’re putting a big percentage of it right here instead of in it, so it’s life imitating art [laughs].

AX: So it sort of forces you to be authentic?

BRADFORD: Yeah, I think so.

AX: Jimmy Fallon is one of GUYS WITH KIDS’ creators and executive producers. How is he as a boss?

BRADFORD: I mean, working for him is just a lovely experience so far, and I’ve kind of crossed paths with him before here and there, and he’s just always been the nicest guy. He’s been very hands-on so far, he’s been great.

AX: As far as the half-hour comedy rehearsal process, have you done a lot of theatre? Is this sort of like going back to your roots at all?

BRADFORD: No. All-new territory. Which is exciting for a guy who’s been professionally acting for thirty-three years, to have something new come along. So it’s kind of cool.

BRADFORD: Well, there’s certainly a thrilling element to having to put it on its feet in front of people, and a major payoff, but I think the pattern that I’m going to see form for myself is something akin to week-long terror and anxiety, followed by performance night, and it just feeling great, because that’s what it’s been so far. You’re ready, you’re good, you know your lines and you’re having fun, and now you’re actually getting instant gratification from the audience.

AX: OUTLAW was a drama, but your character was so easily flustered, he provided some comedic relief there …

BRADFORD: The character [Eddie Franks was] this super-smart, smart guy, who gets flustered by the fact that he thinks is life is on a certain track, he’s got this cushy job as a clerk for a Supreme Court Justice, and the rug gets pulled out from under him. So he’s flustered right there from the start. You add in the physical personification of flustering him in the form of this rebellious, crazy, sexual, over-the-top character [Carly Pope’s Lucinda, who was constantly flirting], and it just is more fuel for the fire, it’s a metaphor for what’s really going on in the picture in his life, which is, he’s been left out. Nobody consulted with Eddie about this. His whole future has been derailed, and kind of represents the physical manifestation of that, and I think Eddie benefits from having his world shook up. He [was] book-smart and not street-smart.

AX: At one point in your life, did you think about being a lawyer?

AX: Is being an actor at all like being a lawyer?

BRADFORD: Any good lawyer will tell you that they can defend both sides of the case. You need to be able to, so that you can be ready for whatever is going to come at you, whichever side of the case you’re on. So there’s certainly some acting.

AX: With ITEM 47, was that made after THE AVENGERS turned out to be such a success that they wanted to do ancillary material, or was it made during THE AVENGERS?

BRADFORD: Well, anything I say about timeline, you’re going to have to take with a grain of salt, because I wasn’t there developing it. and Marvel has kind of a farm program, I guess, they have some writers that they are getting stuff from, and they’ve had this idea about making these little shorts to connect this piece and that piece, and this superhero mythology to that superhero mythology. THE AVENGERS was not out yet, obviously, but it was already almost done, and they had this idea about a couple that stumbles upon a piece of alien technology, a gun, from the Battle of New York, which is the big battle at the end of THE AVENGERS. They get hold of this thing, and they’re in New York, just trying to flee for their safety, but they get hold of this gun, they figure out how to get it to work and they go on sort of a Bonnie and Clyde rampage where they’re robbing banks. So that’s what the short is about.

AX: Who plays your partner in crime?

BRADFORD: My girlfriend [in the short is played by]  Lizzy Caplan. She’s great. I’m a fan of her work from PARTY DOWN and various other [projects].

BRADFORD: Louis D’Esposito, who is one of the co-presidents of Marvel.

AX: So that was very much an in-house project at Marvel …

BRADFORD: Oh, yeah. And Eric Pearson wrote it. He was in their farm writer system.

AX: Are you a comics fan?

BRADFORD: I am. I’m not like a super-nerd, but my dad was and is a voracious comic collector, so [as] I grew up, all my bedtime stories and anything like that were always comics. And my dad would do separate voices for each character, we’d read the comic together, so I grew up around a lot of comics. Frankly, I think that THE AVENGERS is probably the best action film I’ve seen in a decade. So I’m a fan, yeah, definitely.

AX: Were you working with a lot of effects and green-screen, or was that mostly practical?

BRADFORD: It was mostly practical, but the effects were kind of huge. They used the same effects house, the in-house guys that they used for THE AVENGERS, so when you see it, it almost looks like deleted scenes from THE AVENGERS. It looks beautiful and the effects are amazing. But we really didn’t have to spend much time in front of a green screen. It was all very practically applied within the framework of these practical sets.

AX: Are your and Lizzy Caplan’s characters liable to come back in another story?

BRADFORD: I hope so. There are no guarantees on that. I can’t say anything definitive, I don’t know anything definitive. I wish I did. If I did, I still wouldn’t be able to say it [laughs], but I don’t know. But the hope and the potential is [still there] yet. The potential is that these characters might get even more deeply woven into the Marvel tapestry. And I’ve got my fingers crossed, because I would love to be a part of that whole thing.

AX: Anything else you’d like us to know about GUYS WITH KIDS right now?