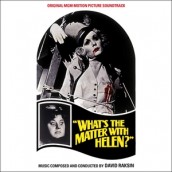 By 1971, the question asked by most over-the-hill Hollywood starlets was “Whatever happened to?” or “What’s the matter?” as their onscreen romantic glamour was traded in for roles as homicidal harpies. In the latter query about WHAT’S THE MATTER WITH HELEN, it’s Debbie Reynolds’ dancing teacher who wants to know what the heck is up with her partner Shelly Winters when their dance school for Shirley Temple wannabes starts to hit the bloody skids. Devilish camp humor was a big part of the appeal of watching Grande Dames shrieking whilst holding blunt instruments, “hagsploitation” that marked the studio swan song of “Laura” composer David Raksin.

Having begun his own career in the 30s with the likes of WINGS OVER HONOLULU and HOLLYWOOD CAVALCADE, Raksin delights in playing the murderously seamy core of the bottom rung of the child star machine. After using the sprightly piano tune “Goody Goody” for the litter tappers, Raksin goes psycho by turning from the keys to overlapping militaristic rhythms, then brings in a deliciously twisted jazz feeling to the manic Depression surroundings. But while he indulges in the droll camp atmosphere, his music also cares about this odd couple trying to pull their lives together after the sins of the past, a sad sax and string fondness that just as quickly turns to shrieking, panicked dissonance and drum rolls as the body count grows. Raksin’s HELEN is tragedy by way of the dream machine gone wrong, with the composer as the campy enabler for the big, bloody breakdown.

Click on Link: To Purchase the WHAT’S THE MATTER WITH HELEN soundtrack