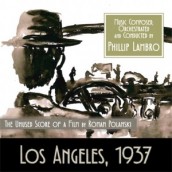 It's the score that could have been CHINATOWN, Jake

As Peter Best was to The Beatles, Phillip Lambro is to film scoring history, the musician who could have been a contender if only it was felt that he had the chops to accompany an iconic act. In Lambro’s case, that historically elusive prize was 1975’s CHINATOWN, whose soundtrack he’d labored on before director Roman Polanski and producer Robert Evans summarily tossed the score after a teen-filled test screening (a similar fate that happened to Gabriel Yared years later on “Troy”), leaving Jerry Goldsmith a scant ten days to whip out what’s arguably one of the greatest scores ever written for a Hollywood classic.

Where “Chinatown” would be one of the many stellar feathers in Goldsmith’s classic-filled cap, Lambro would best be remembered in cult soundtrack circles for MURPH THE SURF and CRYPT OF THE LIVING DEAD – yet retain popularity in film cognoscenti circles as the guy who did the first score for CHINATOWN. Now the rejected score that every hardcore fan wanted to hear is finally revealed under the guise of LOS ANGELES, 1937, a title that makes a point fool no one with the follow-up “The Unused Score of a Film by Roman Polanski.” But if Lambro’s work doesn’t hit the heights of Goldsmith’s, it’s also not a half-bad score, especially given some similarities to the final soundtrack that one might not expect.

Where Goldsmith went for a lush film noir main title to smoothly bring in his classic theme, Lambro announces his woozy jazz theme over a surfeit of weird, impressionistic dissonance, weird string and brass effects that likely mystified audiences. Lambro indeed takes the title to heart, using Asian gong and brass effects to conjure an atmosphere of inscrutable mystery.

Like Goldsmith, Lambo uses string sustains and staccato suspense, going from a militaristic hint in “Mariachi Square” to a piano pounding, brass snarling “Orchard Chase.” At his most successful, Lambro’s femme fatale theme for “One Night With Evelyn” beautifully captures the doomed romanticism of Polanski’s vision. But in the end, the basic question fans will have if Lambro’s CHINATOWN is as good as Goldsmith, or if it deserved to get thrown out in the first place? The answer to the first question is a definite “no,” which doesn’t mean that Lambro’s score isn’t as interesting, or worthy in an era when experimentally minded composers like, Michael Small and Jerry Fielding were trying to redefine the rules. Lambro’s misfortune was perhaps being too interesting, in interesting times, and it’s doubtful CHINATOWN would be remembered today had it gone out with his far eerier score that more often than not seemed better suited for Rosemary Woodhouse than Jake Gittes.

After trying an ersatz Kickstarter campaign years ago to finance a new recording of Lambro’s CHINATOWN, Perseverance has been able to release the real deal, joining the label’s other releases of CRYPT and MURPH in giving some deserved love to this overshadowed, and talented composer who never made the big leagues (and who was pissed enough about it to write a book about the CHINATOWN experience called “Close Encounters of the Worst Kind”).

In addition to all twenty-two plus minutes of what Lambro recorded (as opposed to the near-hour of music that Goldsmith composed that will hopefully get its own proper release one of these days), LOS ANGELES fills out its album with a number of interesting, experimental modern classical pieces that helped get Lambro the job, along with CHINATOWN‘s trailer music, the only work of his that did get into the movie in a fashion after it was judged that Goldsmith didn’t write anything that would fit the coming attraction.

When it comes to offering an appreciative last word on the stuff that rejected score legends are made of, “Torn Music” author Gergely Hubai offers an appreciative recounting of Lambro’s efforts, which are accompanied by appropriately Kafka-esque artwork by Melinda Surga that capture every composer’s worst nightmare of seeing their shot at a major career go up in smoke.

Click on Link: To Purchase the LOS ANGELES, 1937 soundtrack