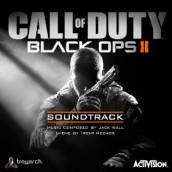 When so many kill-crazy videogame scores are basically comprised of rock guitars blasting over shock waves of electric percussion, it’s nice to have one mega-popular franchise offering far more than you’d expect from the usual musical campaign. Not that there’s any less of the shredding action stylings that have become as popular on consoles as theater screens. But it’s just how interesting Jack Wall makes the nearly 2 ½ hours of score offered on CALL OF DUTY: BLACK OPS 2 that merits attention, especially when divorced from the game’s bazooka-level sound design.

A hardened warrior of such weapon-packed games as SPLINTER CELL and the first two editions of MASS EFFECT, Wall brings in an assured orchestral sound to the fray, Arabic rhythms going for the old-school action swagger of LAWRENCE OF ARABIA while electro-pulses recall a high-tech TRON future while Latin drumming does battle in the jungle. It’s a broad canvas afforded by the game’s clever time jumps that go from the ‘Nam to Afghanistan, Nicaragua and the mecha-weapon future of 2025, sent into motion by a menacing, razor-sharp theme by Trent Reznor that builds his “Dragon Tattoo” sound into the kind of heroism that’s about kicking ass instead of saluting the flag. Wall also brings voices into play for some of the album’s coolest bits, particularly as Azam Ali’s Arabic vocals join with techno beats and pounding orchestras for a Pakistan run. You never know which musical war zone Wall is going to throw you into with his ever-building, and surprisingly thematic action cues. It’s a feeling of surprise that makes BLACK OPS II particularly exhilarating. And when’s the last time you’ve heard a delicate Spanish song of lost love in an album like this, let alone eight minutes of Mozart? Far more musically satisfying and brainier than scores dedicated to blowing yours out with pure metalhead frenzy, BLACK OPS II delivering the goods.