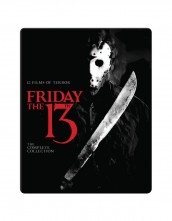 Yes, this is about as complete as it’s going to get until more material is unearthed for another go-around

The FRIDAY THE 13th films may be wildly loved by horror fans (and those with nostalgia filled eyes for the good old days of slasher movies), the treatment on DVD and Blu-ray has been a splotchy one at best.

Every time Paramount has attempted to do a box set or repackage the films, it always feels like something is lacking. It’s a damned if you do, damned if you don’t thing.

The problem being, the first eight movies in the franchise were low budget efforts and considered to be the bastard stepchild at Paramount. They made money, but in many instances, they embarrassed the studio, so the idea of preserving or keeping excess material from the films for future use was not something they thought of at the time.

Thankfully, the original 1980 film was finally released in an Unrated version when Paramount last upgraded the discs and put it out on Blu-ray.

There are also a myriad amounts of deleted scenes and longer, gorier versions (cut due to the MPAA) for the other films that would be another boon to the franchise if money and time went into restoring or tracking some of the missing pieces down (if indeed, they still exist).

I would say that, Paramount did a pretty nice job on the 2009 re-release special editions with enough bonus features and material (and remastering), that it was worth the upgrade. The movies looked better than ever in their remastered form, especially the original which looked absolutely gorgeous.

Now it’s time for another repackage, and this time it’s noteworthy because Paramount and Warner Bros. have teamed up for the ultimate Blu-ray collection. The film compiles all eight Paramount films, all three New Line releases and the 2009 remake. It’s a pretty important set, because now you can have all the films in one place for the very first time – and on Blu-ray too (the latter Paramount films didn’t get the Blu-ray treatment).

The discs themselves include pretty much a potluck dish of supplementary material from the 2009 re-releases, the 2004 Paramount box set FROM CRYSTAL LAKE TO MANHATTAN and the special editions of the New Line releases.

The new stuff that’s included is a super abridged version of the great Peter Bracke book CRYSTAL LAKE MEMORIES: THE COMPLETE HISTORY OF FRIDAY THE 13th, 3D glasses for PART 3D and a pretty awesome CAMP CRYSTAL LAKE COUNSELOR patch from the original film. The packaging is also quite nice. It’s housed in a tin box and the actual sleeves for all the films is quite nice. Care was definitely put into the look and feel of the set.

And just as cool, and perhaps making this worth the steep price for already having all of these films previously in one form or another, is the ability to download the Complete Collection via Ultraviolet so you can have a digital copy of the FRIDAY universe.

Now a quick review/rundown of each of the films.

FRIDAY THE 13th (1980) – This is where it all began, and even though at the time the film felt like a second-rate HALLOWEEN rip-off, this original film holds up much better than you would think. It’s much scarier, sparse and spookier than many of the films that followed. It has a simplicity to it that has allowed it to age gracefully over time. It’s also one of only two films in the franchise doesn’t feature Jason as the killer (the other being A NEW BEGINNING which features a fake Jason).

FRIDAY THE 13th PART II (1981) – Out of all the other films, this is the closest in spirit to the original. It’s also the first time Jason became the actual killer in the franchise. The characters are likable (and a good thing too, because you want to care about the people who are going to die) and it has an ample amount of suspense and gore.

FRIDAY THE 13th PART 3D (1982) – Another solid effort, though this 3D film began to bring a little more camp into the proceedings (and I’m not talking about Camp Crystal Lake). This one feels more dated with the hippies and the bikers, but it does try to do a slight variation on the story and you can’t fault the film that finally introduced Jason’s trademarked hockey mask.

FRIDAY the 13th: THE FINAL CHAPTER (1984) – A noble failure, as it tries to conclude the franchise, but doesn’t, really, because eight more movies followed after it). By this time, the franchise feels like it’s merely an excuse to randomly kill teenagers than hinge an actual story to it, even though Corey Feldman’s Tommy Jarvis is an interesting protagonist. It was the worst of the films up until JASON TAKES MANHATTAN unseated it and then JASON GOES TO HELL unseated that after it.

FRIDAY the 13th PART V: A NEW BEGINNING (1985) – The franchise continues to slide downhill with a fake-out movie with a surprise twist that pissed off many FRIDAY fans (myself included). Points to the producers for trying to do something different, points taken away for failing to make it work.

JASON LIVES: FRIDAY THE 13th PART VI (1986) – He’s back, the man behind the mask in one of the most entertaining sequels of the franchise so far. The movie is way meta, before meta was even acknowledged in cinema as it finally solved the FRIDAY story dilemma – having two consecutive storylines happening at once. You have the Jason A-story of killing random people and teenagers, while the B-story is Tommy Jarvis trying to get to Crystal Lake to stop Jason from killing people. It works well, and the dark humor is the only time humor has fully worked in one of these movies successfully.

FRIDAY THE 13th PART VII – THE NEW BLOOD (1987) – Another attempt at reinventing the franchise, this time with Jason squaring off against a telekinetic teenager. It’s another solid effort with some nice twists and a great blending of the slasher genre with more fantasy elements.

FRIDAY THE 13th PART VIII: JASON TAKES MANHATTAN (1989) – I bet Paramount was ruing the day they decided to use roman numerals to identify the FRIDAY films with this one, because it was getting way too bulky by this time.  Again, an out-of-the-box idea, but it fails miserably because it doesn’t deliver. Over half of the movie takes place on a boat with the latter half barely having any real New York in it to make it the Big Apple gorefest it should have been. There are a few choice moments, but like PART 3D, it feels horribly dated.

JASON GOES TO HELL: THE FINAL FRIDAY (1993) – Neck and neck with JASON TAKES MANHATTAN as the worst FRIDAY film as New Line takes over the franchise. Adding a supernatural element completely changes who and what Jason is and it was a huge mistake. It’s asinine and completely neutered the simplicity and beauty of Jason. Though, I have to admit, I am fond of the twist fake-out that opens the movie. Still, Jason is a killer, not a supernatural entity, and, when will these films learn to stop using the word “Final” when it comes to the FRIDAY THE 13th franchise? Three more followed. How is that final?

JASON X (2002) – Almost ten years after THE FINAL FRIDAY, Jason is sent into space in what could have been an absolute travesty, but the end result is actually quite good. It plays up not only science-fiction tropes, but also Jason in general. It has an ample amount of humor and freshens up the franchise, even though many would have probably preferred a more old-fashioned slasher movie throwback.

FREDDY VS. JASON (2004) – It took way too long, but New Line finally paired up horror’s biggest baddies in a pretty entertaining mash-up. Though, I was never too thrilled to have Jason and Freddy’s back stories linked up, the rest of the movie gives us the best of both worlds – surreal, nightmarish dream sequences and old fashioned Jason kills. This is probably he most expensive installment in either of the franchises (outside of the recent remakes of both installments).

FRIDAY THE 13th (2009) – At long last, FRIDAY THE 13th is rebooted, and ends up feeling like … a sequel to FRIDAY THE 13th. I liked the new film, though director Marcus Nispel was probably not the best choice to helm this installment. It would be wonderful if an actual FRIDAY fan who also happened to be a director, was hired to helm the ultimate FRIDAY movie, but that’s not the case here. The story is actually quite solid and remixes the first three movies in the franchise into this new film. All the tropes are here, gore, girls and graphic violence. It’s a shame a follow-up wasn’t greenlit fast enough. After all, the next movie will be FRIDAY THE 13th: PART 13!

As for THE COMPLETE COLLECTION, this set doesn’t mean you can throw away your previous box sets, but it is a nice, comprehensive one-stop shopping for all the films on Blu-ray. And if you don’t own a complete set yet, this is definitely worth buying. For all other FRIDAY fans, proceed with caution (though, come on, admit it, you were going to buy this thing anyway for the Crystal Lake Counselor patch).