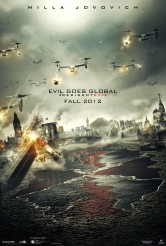 One of the great things about the RESIDENT EVIL franchise according to star Milla Jovovich is that writer/producer/occasional director (and her husband) Paul W.S. Anderson creates the next installment when inspiration strikes.

“It’s not a machine churning them out,” says Jovovich while speaking to the press shortly before the RESIDENT EVIL: RETRIBUTION panel at Wondercon. “But every two or three years, it’s all about Paul’s imagination. It’s scheduled when inspiration comes – that’s what keeps it fresh.”

It also helps the same creative team has been in place for five films, including the forthcoming RESIDENT EVIL: RETRIBUTION.

“This is rare because it’s the same creative team behind the camera as in front of the camera throughout the entire franchise, so it’s in passionate hands,” adds Jovovich.