Home » TCA News: NBC very proud of UP ALL NIGHT and hopes for growth on Thursday nights 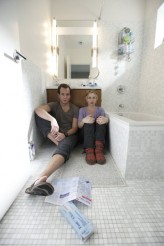 TCA News: NBC very proud of UP ALL NIGHT and hopes for growth on Thursday nights

Even though NBC gave its plum post THE OFFICE time slot to the traditional sitcom WHITNEY this fall, NBC has been very encouraged by the single camera comedy UP ALL NIGHT starring Christina Applegate and Will Arnett that’s been holding its own on Wednesday nights.

That’s one of the reasons NBC Entertainment Chairman Bob Greenblatt decided to move UP ALL NIGHT to Thursday nights at 9:30 midseason and spoke about the change at today’s TCA press tour.

“We’re very buoyed by UP ALL NIGHT,” says Greenblatt. “It’s creatively strong and getting stronger. It was thrown out on its own on Wednesday night and did as well as it did. It was very encouraging. We thought it would be great to see if we could grow that show and the only way to grow it, is to give it one of those few and far between lead-ins we have and the best lead in for a comedy is THE OFFICE. [So we thought], ‘Let’s give UP ALL NIGHT the opportunity WHITNEY has an see if we can grow it.”

Meanwhile, WHITNEY will move to Wednesday nights anchoring 8:00 pm and leading in to the new Chelsea Handler created comedy ARE YOU THERE, CHELSEA? at 8:30pm.

Tags: Are You There Chelsea, Chairman, Christina Applegate, NBC, Robert Greenblatt, TCA, Up All Night, Whitney, Will Arnett, press tour