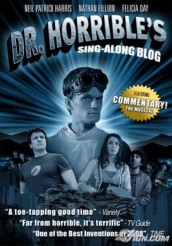 TCA 2012 News: The CW addresses the reason for bringing DR. HORRIBLE’S SING-ALONG BLOG to the CW

In 2008,  Joss Whedon creating DR. HORRIBLE’S SING-ALONG BLOG for streaming on the Internet and DVD, now it will get a formal network airing on the CW this fall.

Starring Neil Patrick Harris, Nathan Fillion and Felicia Day, having the project air on network TV was a no brainer for The CW President Mark Pedowitz who spoke about the decision at today’s Summer 2012 TCA Press Tour.

“I’ve been a big fan of DR. HORRIBLE and I actually tried to acquire it when I was at ABC Studios for the ABC Digital player,” says Pedowitz. “We primarily are going to re-edit it for TV, because I was very familiar with how long it was. So basically, it’s what has been online for the last couple of years, but it’s the re-edit for a 42-minute piece.”

“Hopefully, if Joss does another one, we’ll get a crack at doing that,” says Pedowitz.