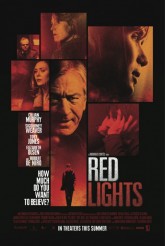 A mixture of great twists and uneven pacing

It’s a measure of just how effective RED LIGHTS is that, even though we know there has to be a twist, we don’t guess what it is before writer/director/editor Rodrigo Cortes is ready to reveal it. Moreover, he plays fair throughout, leaving clues throughout. Unfortunately, the storytelling that gets us to this point is a bit muddled, so that we, along with the film, do some unnecessary traveling in circles before we get to the point. Still, the overall experience is more effective than not, leaving us with a sense of being in on something that’s cool.

The term “red lights” is used by psychic researcher Dr. Margaret Matheson (Sigourney Weaver) for something that’s out of place, indicating fraud is afoot. In RED LIGHTS’ tense early sequences, Margaret and her associate Dr. Tom Buckley (Cillian Murphy) investigate what seems to be a formidably haunted house, complete with terrifying banging sounds, floating tables and fainting mediums. In short order, Margaret ends the phenomenon, but not in the way the homeowner expects. There’s a hint of THE LAST EXORCISM here, but RED LIGHTS has something different in mind.

Margaret and Tom are both passionate about debunking fake mediums, but for different reasons. When famous blind psychic Simon Silver (Robert De Niro) sets up his first public appearances after a thirty-year retirement – his last appearance coincided with the unexpected death of one of his detractors – Tom is all for confronting the guy head-on. Although she’s likewise sure that Silver is a fake, Margaret is far less eager for battle.

While we have some idea of the overall broad strokes here, as more and more peculiar events occur, the particulars are genuinely startling. It helps greatly that Cortes starts with a tone that is at once playful and informative. (If you want to know how to make a table appear to levitate without any special equipment, you’ve come to the right movie.) RED LIGHTS never fully loses its sense of fun, either – even when things begin to seem dire, Tom gets to deliver a quick summation of the situation that is both accurate and hilarious.

It also helps that Murphy ably radiates determination and urgency, and that Weaver can deploy the air of crisp professionalism that we see in so many of her characters while also showing great warmth and vulnerability here. De Niro has a twinkling sense of mystery and showmanship as the reclusive Silver. Elizabeth Olsen has presence as Tom’s assistant/love interest and Joely Richardson exudes smiling menace. Toby Jones is endearing as a psychic researcher who greatly wants to believe.

There are, however, uneven stretches in RED LIGHTS. The film itself seems a little uneasy with Silver, as though afraid too much will be given away, so until the finale, there’s a sense of sameness in many of his scenes. A few fantasy sequences are more jarring than evocative and one of the characters has a temper tantrum that seems less interesting (or even likely) than other possible reactions in response to changed circumstances. The climax is also a touch too weighty – a little explanation is crucial, but it goes on just a little too long.

Still, RED LIGHTS is mostly a fun example of its genre, with both jump scares and narrative surprises. Try not to let anyone spoil you before you see it.