Home » Interview: Doug Liman and Jordan Carlos on I JUST WANT MY PANTS BACK 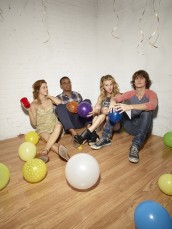 Interview: Doug Liman and Jordan Carlos on I JUST WANT MY PANTS BACK 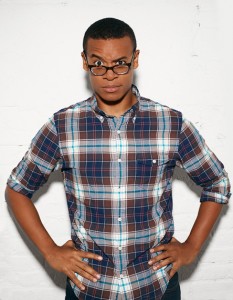 In MTV’s new live-action comedy I JUST WANT MY PANTS BACK, four twenty-something friends in Brooklyn try to make their way through the world. Jason (Peter Vack) gets himself into the title situation and his best friend Tina (Kim Shaw) is similarly prone to encounters with strangers. However, Jason’s other pal Eric, played by Jordan Carlos, is still involved with his college sweetheart Stacey (Elisabeth Hower). The series is written by David J. Rosen, based on his novel.

Doug Liman (SWINGERS, THE BOURNE IDENTITY, MR. & MRS. SMITH) is not only the executive producer of the series, with producing partner David Bartis and writer Rosen, he’s also the director. Liman and actor Carlos (MAYNE STREET, COP OUT, NURSE JACKIE) are hanging out together at an MTV party, so it’s a two-for-one PANTS interview.

ASSIGNMENT X: Did the two of you meet through the casting process?

JORDAN CARLOS: We did, yeah. I’d actually been to [Liman’s] house before, but we definitely solidified through the casting process.

AX: Was your character written to be African-American?

CARLOS: It was just casting. In the book, Eric actually is white, he’s Jewish, but I don’t know, it just worked out. I’m happy.

DOUG LIMAN: We didn’t have race in mind for any of the characters.

AX: When you were casting, did you cast everybody individually, or did you look at how the main people worked together as a unit?

LIMAN: We did it as a unit. I did that for my films – it’s essential. I mean, I guess if you’re show was one solitary person on a deserted island, you’d cast that way, but at the moment, it’s about interactions. My films and TV shows are all love stories. Even if it’s Vince Vaughn and Jon Favreau in SWINGERS, it may be two heterosexual men, but it’s a love story, and you can’t act that chemistry. Either it’s there or it’s not there.

CARLOS: It’s so funny. The thing that I love about New York is, you sort of fall in love every day. You might see somebody on the train, or on the sidewalk. It’s a city of eight million people, more than half of them women. I actually saw Elizabeth, my co-star, [for the first time] on the street, and it was like, “This is a very pretty girl.” And I was like, “What are the odds that we’d be walking on the same side of the street?” We were. “What are the odds that we’ll be going to the same building? What are the odds we’ll be going to the same floor? What are the odds we’ll be actually reading together?” And it was interesting, because Elizabeth and I actually got along, which was really nice. She plays my love interest. And it was a total New York moment.

CARLOS: My character is a little bit more driven and focused on becoming a doctor, whereas Peter is kind of trying to find his own identity, I’m focused on a goal. Through the course of the season, we’ll see if that’s really, really, really what he wants to do. That’s what I like about him. I’ve been there, I’ve done that.

LIMAN: He’s also coming to terms with being in a relationship and living with somebody and [contemplating] are we really going to be adults? Is this it, or are we going to fight against it and maybe still fight for our independence? And can we still be cool and be in a committed relationship?

AX: What’s the dynamic like between your character and all of the other characters?

CARLOS: I think the hardest thing to do in New York is to have a friend, because you’re so self-involved and self-interested. I love the enmeshing of the stories, that we actually do genuinely care and give a crap and check in with each other. And I think between me and Elizabeth, it’s great. She definitely cracks the whip and I’m that kind of guy. I like a girl that takes the reins [laughs].

AX: Is the emphasis in the show more the interrelations between the characters, or the growing-up process, or do those work out to being the same thing?

LIMAN: It’s more the growing-up process and it’s not as internal as just following these four characters. Every week, there’s a guest star or two and it’s about their experiences in the outside world. That’s why it was important for us to shoot it in New York, because they venture out. One of the most taxing aspects of the production is that we don’t go back to the same locations that often, because young people don’t go to the same bar every night, and they don’t have the same scene every week in the same place.

CARLOS: You don’t fall into a routine. When you’re young, you’re willing to experiment and try and find out. They put our characters into some very hilarious and compromising positions – no pun intended [laughs].

AX: Is this your first foray into doing a sitcom or a half-hour comedy?

LIMAN: It is, but not my first foray into comedy. I mean, my start was in comedy with SWINGERS. Comedy is comedy. Comedy has always been very special to my heart. Even in something as serious as THE BOURNE IDENTITY, there’s humor in the movie. And I’ve always looked for humor, so this is great, because it’s everywhere. It’s in every scene, it’s in every storyline. It’s the seat for the series, so it’s a blast.

AX: Any possibility of a crossover with your USA spy series COVERT AFFAIRS, with CIA agent Annie Walker having to find the pants?

LIMAN: Greenport is actually pretty dangerous, so I don’t know if would send her someplace that dangerous. It’s crazy there – it’s wild in those streets.

AX: And although I don’t think it did bang box office, were you happy with the overall response to your most recent feature film, FAIR GAME, the fact-based film about the outing of CIA agent Valerie Plame?

AX: Can you talk about how it’s different for you?

LIMAN: I love working in television, because it gives me a discipline I then bring to my movies. BOURNE IDENTITY would not have the pace that it has if I hadn’t come from spending a year doing commercials. Commercials are even more extreme than television. “That was a great performance, but it was four seconds. Can you give that same performance in three?” We deal with that every time we’re on the set. It’s like, “That’s a great scene, but if you can’t do that scene seven seconds faster, we’re going to have to cut something out of the episode.” And that discipline that you learn I bring to my films, and I think if there’s a consistent theme throughout my movies, it’s that there’s a real efficiency of storytelling and they don’t come across as self-indulgent ever.

AX: And your show is set in Brooklyn, …

CARLOS: [People talk] Even faster. With their hands.

AX: Do you have any other projects that you’re working on right now that you can say what they are?

LIMAN: I have a movie I’m beginning to work on.

CARLOS: I do stand-up gigs at colleges. It’s fun. That’s even harder [than television].