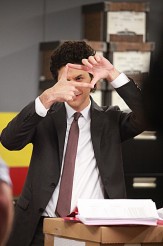 The actor also talks PARKS AND RECREATION and UNDERCOVERS

Showtime’s HOUSE OF LIES, now in the midst of its first season Sundays at 10 PM and already renewed for next year, is based on a memoir by real-life former management consultant Martin Kihn. In the series, Don Cheadle plays Marty Kaan, the leader of a group of corporate management consultants whose vocabulary of head-spinning slick-speak can dazzle clients into ignoring the b.s. raining down upon them.

Marty’s minions include Kristen Bell’s Jeannie Van Der Hooven, Josh Lawson’s Doub Guggenheim and, last but not least, Clyde Oberholt, played by Ben Schwartz. Schwartz, who recurs on NBC’s PARKS AND RECREATION as the ever-optimistic Jean-Ralphio and was techie spy Bill Hoyt on the short-lived UNDERCOVERS, talks about the range of roles from nice guy to prince of smarminess.

BEN SCHWARTZ: I’ll give you that. They’re both very excitable creations, yeah.

AX: Is it a relief or a stretch to play someone like HOUSE OF LIES’ Clyde Oberholt?

SCHWARTZ: It was a conscious decision. [On] UNDERCOVERS, there never was a human being this infatuated with another human being [than Schwartz’s character Bill was] with Boris Kodjoe’s character Steven.. [As the character], I love him. I can’t believe that I get the opportunity to work with him. [In real life], I love basketball, and it’s like knowing that Michael Jordan was the best basketball player of all time and he’s retired, right? And all of a sudden, they say, “He’s coming out of retirement, and you get to play basketball with him.” So to me, being like, “Oh, my goodness, I’m getting to work with the best agent in the universe.” So it’s that type of infatuation and love for [Kodjoe’s] character. And then Jean-Ralphio is more just the positive side. He could lose one million dollars and if he has a dollar left, he’ll be like, “You’ll never believe it. I have a dollar, guys!” This character [Clyde] has flaws and makes mistakes, and you see him try to make decisions whether to redeem himself or go deeper into this terrible hole of what it is, and it was a conscious decision for me to play that character that had layers. It’s crazy – I get to act with Don Cheadle and Kristen Bell and Josh Lawson. I try to do things that will make me better at acting or writing or whatever I’m doing, and I think to play with the people who are the best in the field will hopefully make me a little bit better.

AX: Before you got UNDERCOVERS, were you a fan of spy shows?

SCHWARTZ: You know what’s funny? I always watched spy shows and spy movies and stuff like that. And luckily, I was always attracted to that guy who said, “Hack me into the mainframe,” or doing the really nerdy-type thing. So when I was able to get this role, it was such a gift and such a fantastic thing. I got to be the tech person. I [dealt] with computers, but at the same time, I could handle a gun and fight, so I got to be this hero, which for me [was] so exciting, and then at the same time, I got to go into the laptop and open service elevators when they needed me to.

AX: How is the scheduling working out between Clyde on HOUSE OF LIES and Jean-Ralphio on PARKS AND RECREATION?

SCHWARTZ: I love that people know Jean-Ralphio. That’s amazing. I love saying his name. It meant quite a deal to me, and Showtime was like, “Yeah, you know what? We love you on that show [PARKS AND REC].” They’re so nice. I’m telling you, [Showtime executive David] Nevins and the creator of this show [HOUSE OF LIES], Matthew Carnahan, did not have to be nice [and] were incredibly nice. Everybody was like, “We totally get it. Yeah.” And [PARKS] gave me a certain amount of episodes, and I fulfilled those episodes, and when we wrapped here and I had more time, they allowed even more. I’m actually doing three [series]. I’m doing an animated show for Disney XD, so I have this one [HOUSE OF LIES] – we’re wrapped here – I do that Disney XD show and then I do the PARKS AND REC stuff, whenever they invite me, it is an instant “I am there.” So far, you’ve seen everything I’ve done. But I hear that they’re thinking of stuff right now.

AX: How does it feel to be so in demand on three different networks?

SCHWARTZ: That’s true, they’re owned by big, huge, different people. I’m always worried about what I’m going to do next. I rarely think about, “Oh, I’m doing three shows at the same time.” It’s crazy. It’s amazing. I started in comedy, I still do shows for free every single week at Upright Citizen’s Brigade. I’ve performed there for ten years and it’s a matter of like, the idea of maybe being able to do these things that I really care about and really like is such a fulfilling, wonderful feeling, and I’m just worried about when it’s going to end and I hope it doesn’t [laughs].

AX: It seems like a lot of television and film comedies are recruiting from the ranks of live comedy and/or improv stage shows like Upright Citizens Brigade, the Groundlings and similar groups …

SCHWARTZ: I think the type of comedy that’s coming out right now lends itself to performers like us, and if you look at Josh Lawson, he’s an unbelievable improviser, I think that a lot of the movies and [television] you’re seeing now lends itself to that. I’m trying to think about it mathematically, because I’m a nerd, and maybe it’s because we don’t shoot on film any more, we shoot on things that don’t cost as much money to run the film, and so we can play a little bit more. I don’t remember when I saw the U.K. version of THE OFFICE or I saw the American version of THE OFFICE – I was like, “Oh, my God, that show feels like it was written for me.” THE LARRY SANDERS SHOW – oh, my God. I think those types of shows are very popular right now, and for me, Jean-Ralphio and this type of show [HOUSE OF LIES] are exactly what I want to be doing, so it’s exciting. Now there are even more opportunities. And by the way, if I don’t have those opportunities, I try to make my own short films and try to get out there.

AX: How would you describe the comedy style of HOUSE OF LIES?

SCHWARTZ: You can find so much comedy and fun in these situations. The idea of people being on the edge or the idea of following someone either having a choice to redeem themselves or make a mistake. The world that we live in, all the actors, is one where we’re always on the edge and unsure of what to do with ourselves. I think there’s a ton of comedy and then the four of us [HOUSE OF LIES regulars Schwartz, Cheadle, Josh Lawson and Kristen Bell] get to have so much fun with each other. And when you spend all the time with each other like these consultants do, as Marty [Kihn] had told us, you have a shorthand when you’re playing around with each other. These are the people you spend time with, this is a different family from what you have. So you have fun shorthand that you really get to play with. There are scenes where you see us deep at work and really nervous, and then we start playing around with each other, or we go to a strip club or something like that. There are so many methods this team uses to just not blow up because they’re on the edge all the time.

AX: Hypothetically, what would happen if your PARKS AND REC character Jean-Ralphio met Don Cheadle’s HOUSE OF LIES character Marty Kaan and Kristen Bell’s character? Would John-Ralphio hire the firm?

SCHWARTZ: If Jean-Ralphio met Marty, he would want to do anything to be friends with him, literally anything. He would think that he’s the coolest person in the world, and then he would me Kristen’s character and would want to fall in love with her and bring her back home. I think he’d hire them in a second. But Jean-Ralphio always sees the happiest things in the universe, and he’s always happy no matter what’s happening.

AX: Anything else that we should about HOUSE OF LIES at present?

SCHWARTZ: I think it’s completely a different show and I think the blend of comedy and drama is so exciting. Just the idea of the characters that we represent and the idea of what we do I think is new to what’s on television, and the thought that we can do it while cursing and improvising and having no restraints on this thing is just a special thing, and I hope that people watch it enough to see the four of us playing around. There’s so much meat and potatoes and fun in that, that I hope that when they see that they’ll get addicted and want to keep coming back.