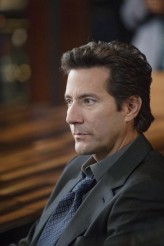 The actor also talks LOST and why he hasn't done HAWAII FIVE-0 ... yet 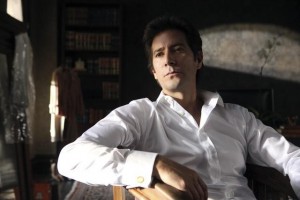 SCANDAL, premiering tonight, Thursday at 10 PM on ABC, is the latest drama from GREY’S ANATOMY creator Shonda Rhimes. However, the main characters in the new series are doctors of reputation rather than of medicine. An elite crew of lawyers, investigators and fixers under the direction of the uber-efficient Olivia Pope (Kerry Washington) takes care of alternately hushing up and exposing the dirty secrets swirling around Washington,D.C. – including one that promises to provide a season-long arc.

Olivia’s right-hand man is Stephen Finch, played by Henry Ian Cusick. ABC series with intricate plots are nothing new to Cusick – he was Desmond Hume on seventy-one episodes of LOST. Born in Peru and raised in Trinidad, Tobago and Scotland, Cusick has had an extensive stage career. During the filming of LOST, he settled in Hawaii with his family, where they still reside, but SCANDAL has brought him back to the U.S. mainland for work.

ASSIGNMENT X:  SCANDAL brings you back to ABC. Were you in the network Rolodex, so to speak, after LOST?

HENRY IAN CUSICK: I don’t think there is such a thing, but I know that when you have to get approval, I think they were quick to say “yes.”

AX: What in particular appealed to you about the character of Stephen Finch?

CUSICK: There was a line in the pilot that said, “I’m not a good man,” and I thought that line was a little gem and it held a lot of potential for storylines. That was a line that drew me in. And working with Shonda Rhimes – she’s such a fantastic writer, it was crazy to say no to a part like that.

AX: Were you looking forward to working with/for Shonda Rhimes?

CUSICK: When I auditioned for this, I was looking for work, and obviously, Shonda Rhimes’ series are a class act and [she’s] a great writer, so when I was offered it, it was a no-brainer.

AX: Shonda Rhimes has said that, to some extent, the character of Olivia Pope is based on SCANDAL co-executive producer Judy Smith, who worked for many years as a Washington, D.C. fixer. Did you talk to Judy Smith at all about being a fixer?

CUSICK: Yes, she was on set and we sat about.

AX: Were any of her insights valuable to your performance?

CUSICK: You know, Judy is watching you all the time, she’s picking up clues to what you’re giving away, just by talking, by being. So it was interesting. Immediately, I thought, “What telltale clues do I give away when I talk?” So it just made you aware that you learn a lot by watching.

AX: Do you think being a fixer is anything like being an actor?

CUSICK: No. [laughs] No. Well, let me think about that. A fixer is someone who spots a problem and just gets on and fixes it and does it. From that point of view, thinking quickly all the time, if I do want to compare it, actors are observant, we try and copy and mimic.

AX: At least in the opening episode, there are points when the fixers try out certain personas to persuade people to do what the fixers want them to do.

AX: Everyone on SCANDAL speaks a little more quickly than normal, a la THE WEST WING. Did you have to consciously speed up your speech?

CUSICK: Yeah, I did. Because I’m not a very fast talker, but the rest of the cast are. I’m one of the slower ones.

CUSICK: It’s a whole new technique and if I can do it well, it’ll be another string to my bow.

AX: Have you done any other projects over the last few years that we should know about?

CUSICK: Since LOST? A couple of things here and there. I did [a double] episode of SVU. I’ve been hanging out in Hawaii mainly.

AX: Your erstwhile LOST colleagues Daniel Dae Kim and Terry O’Quinn are both working in Hawaii on HAWAII FIVE-0. Did you any thought to working on that series at any point?

AX: Speaking of shows filmed in Hawaii, were you happy with the way LOST ended?

AX: If you got into a tight spot, would you want a fixer for yourself?

CUSICK: Now that I know these people exist, yes, of course. If you got into a tight spot, yes, you’d want Judy Smith. However, I have her number now.