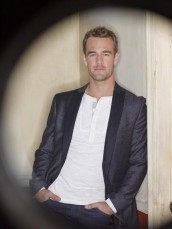 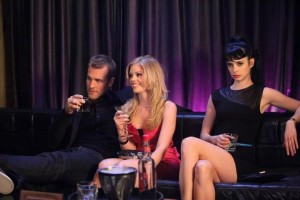 In ABC’s DON’T TRUST THE B—- IN APARTMENT 23, which was recently renewed for a second season, Krysten Ritter plays Chloe, the devious “B” in question. Chloe makes life very interesting for her new roommate June, portrayed by Dreama Walker. Within the story, Chloe’s BFF is former DAWSON’S CREEK star James Van Der Beek, who is played by … James Van Der Beek, in a case of a performer showing a remarkably good sense of the absurd about himself, his career and life in general.

At a party thrown by ABC for the Television Critics Association, Van Der Beek takes a few moments to talk about being in THE B – and series creator Nahnatchka Khan stops by to add a few thoughts.

ASSIGNMENT X: How did you become involved with DON’T TRUST THE B IN APARTMENT 23?

JAMES VAN DER BEEK: I got a call from my agent that there was this script called DON’T TRUST THE BITCH IN APARTMENT 23 and they wanted me to be a part of it. I said, “Sign me up.”

AX: Was the character always specifically James Van Der Beek, or was it “Real actor, name to be filled in by someone who will agree to do it”?

NAHNATCHKA KHAN: When it was just like a pipe dream in my pajamas in my bedroom? I never thought that James would even be close to being available, so I could never have even imagined that he would want to do it and it was such a thrill for our casting director, Lisa Miller-Katz, who’s amazing, had this list and James was on it and I heard he was into it and I saw his FUNNY OR DIE stuff and he’s just super funny.

AX: Was it always an actor who is the same age as Chloe and June?

AX: Were you heartened in doing this by things like Neil Patrick Harris playing a crazy version of himself in the HAROLD AND KUMAR movies?

VAN DER BEEK: Yeah. That was an example of this kind of comedy working really well. So it was great that it was out there just for people to have a good version of it in their heads.

AX: Would you be having as much fun doing this if your character’s name was Jeff Greek?

VAN DER BEEK: Probably not. I think it just seems funnier when you plug my name into it and you put a couple things on my resume into it.

AX: You’re still famous around the world for DAWSON’S CREEK, and you returned to your old location in Wilmington, North Carolina to do a guest arc on ONE TREE HILL …

VAN DER BEEK: I missed the crew [many of whom were working on ONE TREE HILL], I missed everybody down there and I was thinking to myself, “God, I really miss Wilmington,” and then that offer for the ONE TREE HILL thing came in. I said, “You know what? I’d love to go back down there.”

AX: What do you think it would be like shooting DAWSON’S CREEK there these days?

VAN DER BEEK: Oh, my gosh. Everybody has a camera phone now, so the town would be paparazzi. It was really a safe haven for us – the community, the crew. It’s the reason none of us are in jail right now. That raised us in the industry and it was really a foundation for us, that time, when everything else was just going crazy.

AX: DAWSON’S CREEK creator Kevin Williamson is now working on the fourth season of THE VAMPIRE DIARIES. Has he asked you to do a guest shot on that and vamp it up?

AX: Would you have an interest in doing a one-shot on VAMPIRE DIARIES?

VAN DER BEEK: I’d trust Kevin with anything. The man launched my career. I love him. I actually see him from time to time.

AX: You’ve been doing a wide variety of genres over the last few years – you were a series regular as a doctor on the medical drama MERCY and you were in the indie horror film THE PLAGUE, which had zombie children …

VAN DER BEEK: Right. I just thought that was an interesting idea. I like to shake it up every time I go out. I like to do something different. I try a little bit of everything, which I’ve gotten to do.

AX: What are the big differences between doing half-hour TV like DON’T TRUST THE B and hour-long like DAWSON’S CREEK? I know they say dying is easy, comedy is hard …

VAN DER BEEK: Well, I mean, this is comedy, so it’s completely different. The days are shorter [laughs], we don’t cry as much and you laugh a lot more. We’ve been very fortunate. The writing is so strong that it’s been easy. I would imagine if the writing is not good, then it probably is harder than dying.

I’ve got to say, it’s nice to explore the [humor]. I mean, in an hour drama with twenty-two episodes, it has to either become a procedural or a soap opera on some level, I came to learn. So with this, we only have thirteen [episodes in the first season], and there’s really purpose in the comedy. It just gets weirder and weirder every episode. [In one episode], there’s a sex tape that gets released accidentally and then I looked at it, and they’re about to release it, and I look at one part where I lick my lips too much and I want to reshoot it [laughs].

AX: Have you told any of your own stories to the writers?

VAN DER BEEK: Yeah, stuff here and there. And what’s great about Natch [Khan] is, she’ll listen to five ideas and only take the two good ones.

AX: Are these stories about things that you’ve actually done, or are these things where you thought, “Thank God I never really did this, but wouldn’t it be funny?”

VAN DER BEEK: Both. Or stuff I see other people do.

AX: And do you have any platonic female friends who have said, “Wait a minute, if you’re you, is Chloe supposed to be me?”

VAN DER BEEK: [laughs] I haven’t yet – we’ll see if anybody comes out of the woodwork.