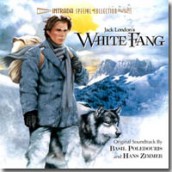 Just like the confident bear who tangles with an upstart white wolf, Basil Poledouris’ old-fangled orchestral score was given a proper mauling by the Disney execs, who make their period Jack London adventure seem a lot more contemporary. But where it’s usually the veteran creature who’d lose the fight when thrown into the fight pit of studio politics, quite a bit of both composers’ work ended up in WHITE FANG, making the movie most notable for its stylistic clash of scores in the long run (even if Zimmer somehow went uncredited). Yet props can also be given to Disney for allowing Intrada to release both musical FANGS for a double album that most fans thought they’d never see, especially given the nature of the situation.

Whether its bear baiting or rooting for the new dog-wolf on the block, WHITE FANG offers both musical camps equal satisfaction. As the composer who was originally meant to be in the wild, especially given his lushly naturalistic score for FANG director Randal Kleiser on THE BLUE LAGOON (not to mention his spectacular orchestral waves for John Milius’ BIG WEDNESDAY), Basil Poledouris provides a score of sweeping, melodic vastness as big as the great outdoors, his lush, string-heavy themes conveying the magical wonder, brassy danger, and most of all the bonding emotion between man and wild. If anything, there’s the throwback feeling of the good old Disney “nature” adventures in Poledouris’ approach that makes the studio’s reluctance even more confounding, as FANG‘s music has a shimmering, heart-tugging quality that could just as much suffice for Big Red and Old Yeller as much as it does an Alaskan wolf. When it comes to danger, Poledouris’ Americana feel strongly echoes his work n RED DAWN, another tale of youth in the cold forest, even if the FANG‘s threats aren’t Stravinsky-inspired.

While Poledouris certainly offers ethnic wind instruments and electronic pads, his use of synths pales before Zimmer’s wall of sound, an ultra modern (if since far evolved from here) combination of pop-rock beats and a thematic orchestral sensibility that would become the face of face of film scoring. Zimmer had impressed with his percussive sound with the likes of BLACK RAIN and DRIVING MISS DAISY before applying a raging symphony to BACKDRAFT in 1991- the year that marked a major leap forward in Zimmer’s approach, along with WHITE FANG‘s release.

Heard fully here, Zimmer’s flexing of orchestral and electronic muscle (greatly abetted by orchestrator Shirley Walker) might seem anathema to turn of the century Yukon, but it’s as mesmerizing and melodic as Poledouris’ work in its own way, right from its incorporation of a period player piano in the opening cue. FANG is a rousing catch all of The Zimmer Sound, incorporating the ethnic winds of RAIN MAN, the rhythmic, Vangelis-y washes of PAPER HOUSE and the pounding action of BLACK RAIN. Where Poledouris’ FANG might have distinctly orchestral peaks and valleys, Zimmer’s approach is more about a mesmerizing flow between awe-inspiring musical vistas and rhythmic suspense. Jack London probably would have been a heck of a lot more familiar with the first approach, but there’s no doubt that he wouldn’t have been just as intrigued by an anachronistic one that would end up sending many grizzled musical trappers into the great white north, Poledouris included. With Intrada’s WHITE FANG, you can be the judge as to the better approach.

Click on Link: To Purchase the WHITE FANG soundtrack