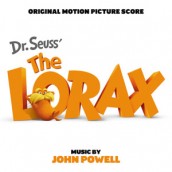 He had to jump from classical tunes to pop standards and his own manic melodies within the space a half second while playing the likes of Bugs Bunny and Daffy Duck. Yet somehow, composer Carl Stalling’s job of melodically tying his toon music together looks positively relaxed when compared to the frantically ironic humor of today’s ADD animated pictures.

But if there’s one of today’s composing generation who’s inherited the Stalling crown with a modicum of style and invention, let alone sanity, then it would be John Powell. With thrillingly manic scores for the likes of ROBOTS and two HAPPY FEET and ICE AGE pictures a piece, not to mention the Dr. Seuss’ toon adaptation HORTON HEARS A WHO, there’s no better composing choice to take on that whimsical author’s most eco-minded character.

Surprisingly, THE LORAX‘s music comes across as being somehow slightly less berserk and more thematic than the music he’d applied to that elephant and his microscopic pals. The charm of Powell’s approach here is that you never know what style you’re going to get next, something that’s always made every toon score of his a crazed voyage of discovery, as given rhythmic-rich structure because of his symphonic sensibility. Powell unleashes one hellzapoppin’ mood swing after the next with a stream of consciousness, pop-orchestral blasts of wild west heroism, stream-hanging thrills, pokey chipmunk voices, Latin dances and operatic choruses that make for a thoroughly energetic LORAX score. The fact that this craziness ends with a magically moving “Funeral for a Tree” actually manages to give some food for thought to the rest of the breezy fun.

Far brasher at getting its eco message across are the songs on THE LORAX‘s Interscope Records release. Indeed, its tunes toe-tapping lyrics that decry tree-killing, fast food and gimme gimme commercialism are one big, humorous dose of double irony. LORAX‘s wiseacre numbers also capture the whimsical wordplay of Dr. Seuss, while also deftly satirizing Queen’s rock operatics and the wince-inducing overuse of Auto-tuned vocals. But if there’s one reason to salute THE LORAX‘s tree-hugging score and songs, then it’s because they’ll drive those blue meanies at Fox up the biggest branch possible.

Click on Link: To Purchase the THE LORAX soundtrack